A sports scientist has revealed the common diet mistakes Australians make that are causing them serious long-term health issues.

Drew Harrisberg, 29, an exercise physiologist from Sydney, has spent years researching scientific-based evidence and knows just how important a nutritious diet is for a healthy, well-functioning body.

From eating too much protein to a lack of fibre, these are the five mistakes Drew says Australians are making every day that can wreak havoc on their overall health.

1. Eating too much packaged/processed food

A popular dietary trend within the fitness/bodybuilding community is ‘if it fits your macros’ (IIFYM) or flexible dieting.

‘The general premise of IIFYM is that as long as you achieve a calorie deficit (burn more calories than you store) and hit your target macronutrients (protein, carbs, fat) you can achieve fat loss and get in great physical shape regardless of the foods you eat,’ Drew told FEMAIL.

‘Sure, it might get you stage-ready for a bodybuilding show but that doesn’t mean it is healthy – it’s a reductionist approach that focuses on food quantity rather than food quality. 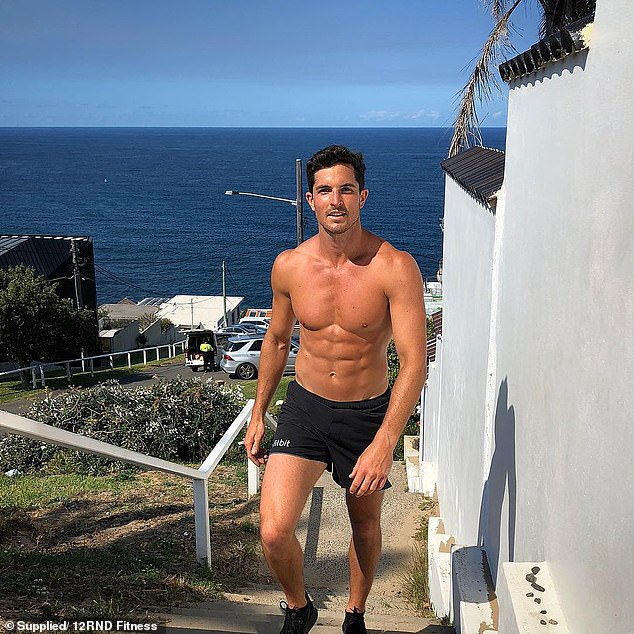 Drew Harrisberg, 29, an exercise physiologist from Sydney, has spent years researching scientific-based evidence and knows just how a nutritious diet is for a healthy body

‘The selling point is that it is not restrictive and allows dietary flexibility and “everything in moderation”.

‘Proponents of IIFYM say that you can get shredded on a diet of pop-tarts, whey protein shakes, burgers, and pizzas as long as you hit your macros and achieve a calorie deficit.

‘This may be true, but if you were to wear your body inside-out I doubt it will look very attractive.’

What foods does Drew always have in his pantry?

2. Eating too many animal-based foods

As a result of the recent high-fat diet trend (LCHF, keto and carnivore), foods like bacon, eggs, and butter have made their way back onto our plates in even in our cups as staple breakfast ingredients.

Drew says this can be a major problem for our health.

‘Worryingly, processed meat has been classified by the World Health Organisation (WHO) as a group 1 carcinogen (known to cause cancer) and is in the same group as asbestos and smoking,’ Drew said.

‘Just because you can lose weight eating bacon, eggs, coconut oil, cheese, and drinking butter doesn’t mean it is healthy in the long term. We have lost sight of lifespan and health-span because of the desire for 6-pack abs.

‘It’s a shortsighted approach to health and wellness.’ 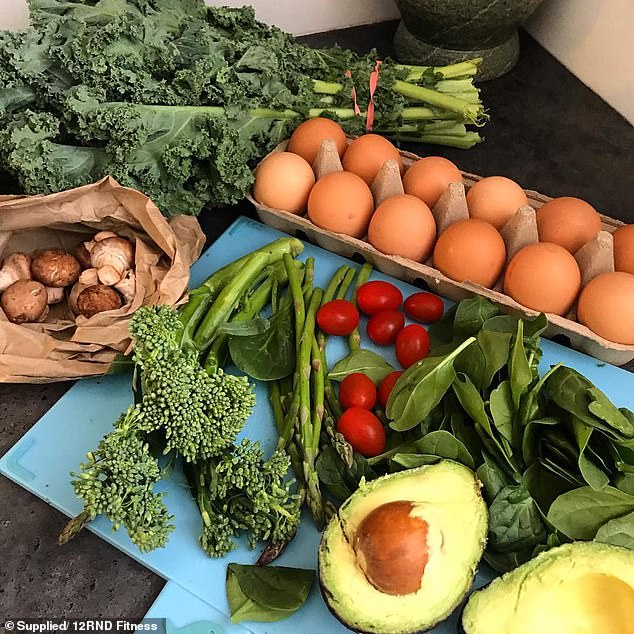 ‘Just because you can lose weight eating bacon, eggs, coconut oil, cheese, and drinking butter doesn’t mean it is healthy in the long term,’ he said

Drew said he’s also witnessed conversations online ‘demonising’ carbohydrates such as fruit as the cause of obesity and type 2 diabetes.

If you care about your health, a predominantly plant-based diet is the way of the future.

‘They’ve even gone as far to say that table sugar should be grouped in the same category as a blueberry,’ he said.

”It’s an outrageous claim that goes against the overwhelming majority of evidence and is a dangerous message at a time when we should be encouraging people to eat more fruit and vegetables and less processed meat.

‘Animal agriculture (factory farming) is an extremely inefficient food system which uses up the earth’s resources. It’s also bad for human health, planetary health and happens to be very cruel from an ethical perspective.

‘If we would all simply limit our animal intake or at least aim for more sustainable and ethical practices, the planet and ourselves would be better off for it.’ 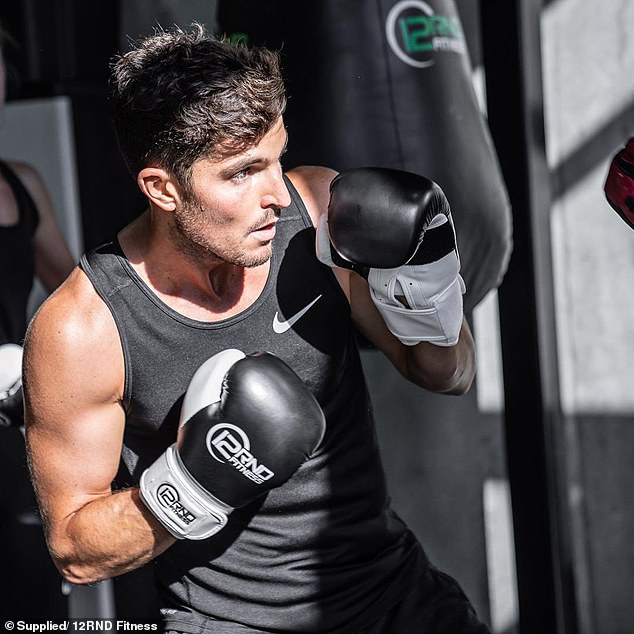 What are Drew’s favourite workouts?

Sometimes I program them myself at the gym but my current favourite is a session at 12RND fitness.

I love the fact that I can show up at any time (within opening hours) and smash a well-programmed workout because the cool thing is, a new round starts every 3 minutes so there are no set class times.

It’s a full-body workout with a focus on boxing. The structure of the workout mimics a 12-round championship boxing title fight i.e 12x 3-min rounds with 30 seconds rest between rounds.

According to Drew, fibre has become the forgotten ‘nutrient’.

‘The majority of people get nowhere near the recommended daily intake of fibre. It is essential for building and maintaining a healthy microbiome in the gut,’ Drew said.

‘Fibre is prebiotic which means it is the food that feeds our gut bacteria and a healthy microbiome is a great way to reduce the risk of chronic disease, improve immune function and general wellbeing.

‘Again, fad diets that promote the majority of calories from animal-based foods are severely lacking in fibre.

‘On the other hand, a predominantly whole-food plant-based diet with an abundance of diversity is a great way to optimise gut health. Foods like fruit, vegetables, whole-grains, legumes, nuts, seeds and fermented foods are all great ways to increase fibre intake.’ 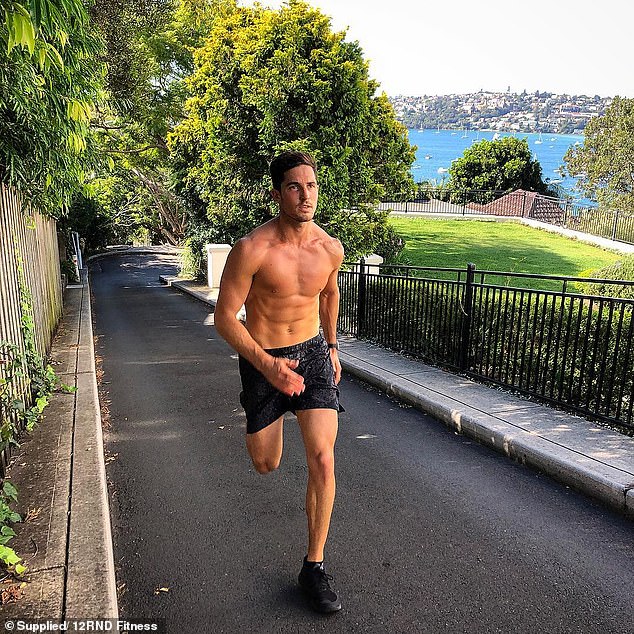 According to Drew, fibre has become the forgotten ‘nutrient’

4. Eating too much protein

The recommended daily intake of protein is 0.8-1.2 g/kg so by this calculation, a 60kg female only requires 48-72g of protein per day.

This range would change depending on age, body weight, lean muscle mass, activity levels and gender.

‘If you’re a very physically active individual partaking in regular resistance training and breaking down a lot of muscle you might want to bump up your protein intake to the upper end of the range,’ Drew said.

‘If you’re an athlete or performance-based individual, you might benefit from going as high as 1.5 to 2 g/kg, but for the average guy or girl, the RDI is more then enough to keep you healthy.’

Drew said people who eat animal-based foods at every meal and use whey protein supplements are overshooting this daily intake recommendation and consuming ‘unnecessary amounts’ of protein.

What is Drew’s day on a plate?

Lunch: A buddha bowl with a grain, a non-starchy vegetable such as broccoli, a protein source, a starchy vegetable, a sprinkle of nutritional yeast and dark leafy greens

Dinner: Another buddha bowl or in winter a homemade curry served with quinoa or wild rice 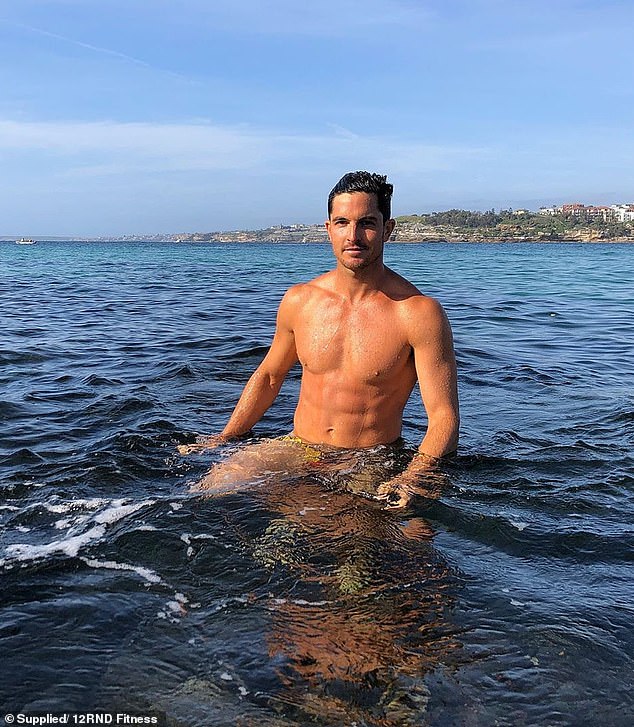 Drew says if animal protein is the hero of your plate at every single meal (especially grain-fed, factory-farmed animals), you might be doing more harm than good

‘Research has shown that 25 grams of a quality protein source can stimulate muscle protein synthesis to the same degree as 60 grams of protein. So, just because some is good doesn’t mean more is better,’ Drew said.

‘Protein became sexy because it was marketed as a muscle-building, weight loss nutrient (baffles me how it can be both). While protein is necessary for cellular repair and muscle growth, the amount needed to build adequate muscle mass is less than most people think.

‘Research shows that animal protein triggers IGF1 and mTOR which cause an increase in muscle growth, however, those same two pathways have also been associated with increased cancer risk and accelerated ageing.’

So, Drew says, if animal protein is the hero of your plate at every single meal (especially grain-fed, factory-farmed animals), you might be doing more harm than good. 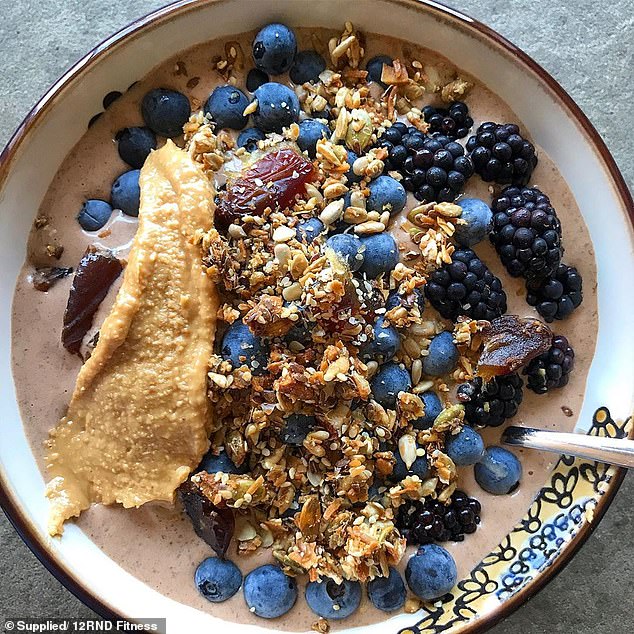 ‘I’m not saying everyone should be 100 per cent plant-based, but a predominantly plant-based diet is a great option,’ he sais

‘A predominantly whole food plant-based diet made up of fruit, vegetables, whole-grains, legumes, nuts and seeds is high in fibre, water, micronutrients, and antioxidants, and happens to be a very satiating way of eating,’ Drew said.

‘I’m not saying everyone should be 100 per cent plant-based, but a predominantly plant-based diet is a great option.

‘By shifting the balance from majority animals to mostly plants (80:20 or even 90:10) you’d be eating in a way that is aligned with the longest living populations in human history, otherwise known as the blue zones.’

According to Drew, people in the ‘blue zones’ live longer than any other population across the world and they have the least amount of chronic disease.

‘If you care about your health, environmental sustainability, and animal welfare, a predominantly plant-based diet is the way of the future,’ he said.

‘A plant-based diet is a highly satiating and very nutritious way of eating. It is very difficult to overeat calories on a WFPB diet because it is naturally fibre-rich, calorically sparse, and nutrient dense.’