A drink-drive businesswoman who already had a string of motoring offences when she was caught three times the limit behind the wheel of her luxury BMW has been spared jail after she claimed a controlling boyfriend had driven her to drink.

Law graduate Foziea Parveen, 29, was seen to swerve around roads, mount kerbs and ‘bounce’ off a building during a 5am cruise through Manchester city centre.

A concerned driver who followed the 155mph BMW 5-Series at the request of police found Parveen, who worked for her family’s retail business, was ‘out of it’ when he tried to stop her.

When she eventually pulled over outside a railway station she began ranting that someone was in the back of her empty car and kicking the windscreen.

Police who breathalysed Parveen discovered she had another drink-related driving conviction and had later gone to jail when she was caught driving dangerous and whilst banned from the roads. She also did not have a full driving licence and had no insurance.

At Manchester magistrates court, Parveen admitted drink driving but was spared prison after telling JPs she had been ‘in distress’ after she went to police a week earlier claiming she has been abusive towards her.

She also claimed to have called police as a recently as Sunday of this week saying he had smashed her phone and ‘forced’ her to drive down a motorway. He was said to be the owner of the BMW.

The drink driving incident occurred at 5.30am on February 5 whilst Parveen, from Stoke-on-Trent, Staffs was thought to have been visiting her unnamed partner in Manchester.

Prosecutor Matthew Treece said: ‘She was driving a white BMW and a witness was driving behind her. To begin with, she was driving normally until swerving outside a Sainsbury’s store where she then stopped in the road with no warning, causing the witness to slam his brakes on, nearly causing a collision.

‘She then continued on up a road swerving in the street. The car mounted the kerb and bounced off a building before coming to a stop.

‘The witness got out of the car and went to look inside the defendant’s vehicle to which he described her as ‘out of it’ either drunk or on drugs. He then asked her ‘what are you doing’ to which she drove off. The witness called the police who advised him to follow her in the car.

‘She continued swerving swerving backwards and forwards then finally stopped behind Piccadilly Station. The defendant then got out of the car. The witness found the defendant screaming and shouting saying that someone was in the back of the car and had begun kicking the windscreen.

‘Nobody was in the car with her. She continued to shout and scream until the police arrived and took her into custody.’ 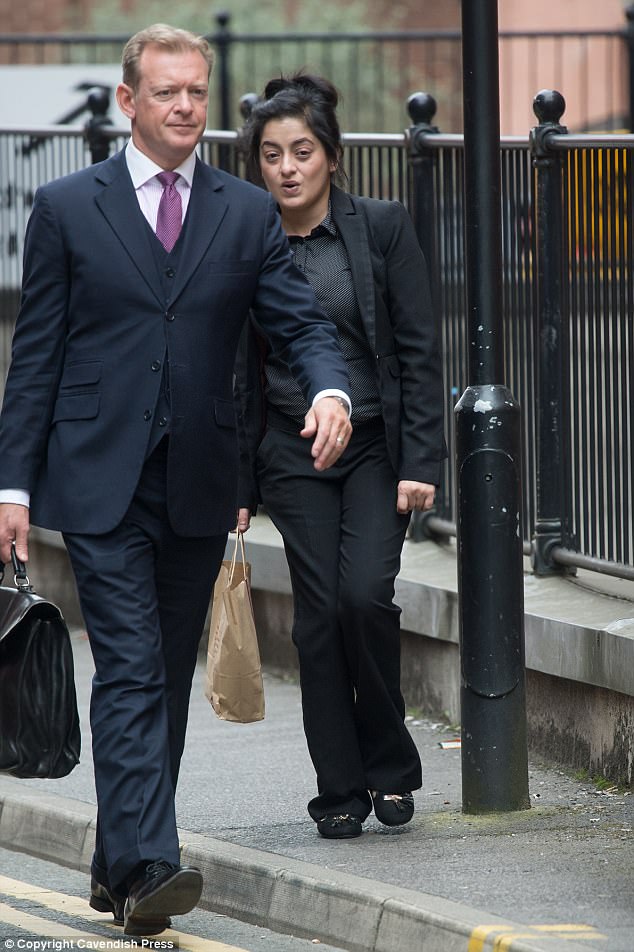 Parveen (pictured) 29, was spared jail after she claimed a controlling boyfriend drove her to drink

A breath test reading showed Parveen had 100 microgrammes of alcohol in 100 millilitres of breath. The legal limit is 35mg.

The court heard she was previously banned from driving in 2012 for a year after she was convicted of failing to provide a specimen of breath.

Parveen who also admitted having no driving licence and having no insurance was given 20 weeks jail suspended for 18 months and was banned from driving for four years and four months. She was also ordered to be electronically tagged for 20 weeks and pay £735 in costs and surcharges.

Her lawyer Simon Morton told the court she was in an abusive relationship, suffers from mental health problems and was suicidal.

Passing sentence Peter Thompson chairman of the magistrates told Parveen: ‘These are exceptional circumstances as we could have sent you to prison, because this is a very serious offence.

‘If you don’t communicate with the probation service 100%, the suspended sentence will be activated. This is an exceptional situation, you could have been involved in an accident, you could have taken a life. It’s simply not acceptable to drink the amount you did and drive a car. All actions have consequences.You are a danger and that is why the maximum ban has been placed for this charge.’