Matthew Jacobs, 26, has been jailed for seven years after killing two 19-year-old musicians when he crashed into their parked car after he had been drinking for six hours

A drink-driver who killed two 19-year-old musicians after getting behind the wheel of his company car at the end of a Christmas night out has been jailed for seven years.

Matthew Jacobs, 26, had spent six hours drinking in Lincoln with work colleagues and was so unsteady that he fell off a bar stool.

His colleagues thought he had arranged a lift home but instead he decided to drive the work’s pool car.

On his journey home he crashed into the back of a Ford Mondeo estate car parked in a lay-by, Lincoln Crown Court heard.

Teenagers Alexander Ross and Sian Chambers, both 19, were asleep in the back of the estate car when they were killed.

Jacobs remained slumped at the wheel of his car only stirring when he was found by a passing motorist and immediately said: ‘I’m going to prison’.

Moments later he fled from the scene on foot. Police used a drone and a helicopter to search for him and he was picked up four hours later close to his home.

He subsequently failed a breath test and even six hours after the crash was almost twice over the limit.

He was more than three times over the limit at the time of the crash.

Jacobs, 26, of Lindholme Road, Lincoln, admitted two charges of causing death by dangerous driving as a result of the crash on December 22, 2018. He also admitted driving with excess alcohol and failing to stop after a road accident. 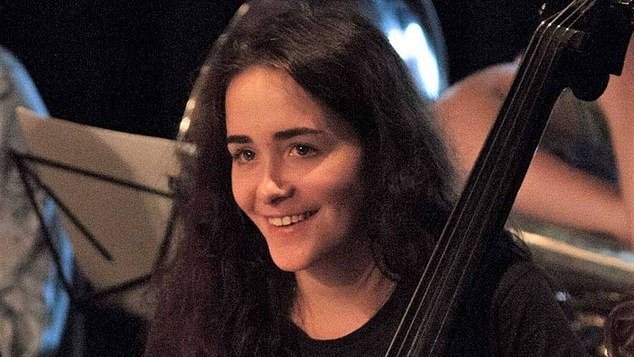 Sian Chambers was a ‘brilliant musician’ who played double bass. Her father said: ‘We now have to come to terms with the fact that our daughter, sister and granddaughter is never coming home again’

He was jailed for seven years and banned from driving for four years. His driving ban will begin when he is released from custody.

Phil Howes, prosecuting, said: ‘This occurred in a lay-by on the A46 Lincoln bypass.

‘This defendant was affected by excessive alcohol and drove into the rear of a car parked in the lay by. It killed two 19 year olds who were lying down in the rear of the car asleep.

‘His car drove into the layby and into the estate car. There appears to have been no reason for that manoeuvre. He hit the rear of the Ford Mondeo estate car with such force that the length of the Ford was reduced by two metres.’

Judge Andrew Easteal, passing sentence, told him ‘There are no words that can adequately describe the tragedy at the heart of this case.

‘The decision you took that night to drive when completely incapable of doing so is one for which you are wholly responsible.

‘Just a few days before Christmas you went with a group of friends from work for a night out drinking.

‘You had drunk so much that you were simply incapable of properly and safely driving a car.’

The Judge said that after the crash Jacobs did not do anything to help the two teenagers and instead made his way from the scene.

‘It makes what you did all the more serious. It was callous and self-interested.’

Michael Cranmer-Brown, in mitigation, said ‘It was a disastrous and tragic decision for him to have done what he did but was completely out of character.

‘It can only be that the befuddling effects of the alcohol wrongly led him to believe that he was going to drive competently.

This was a complete and utter aberration on his part and totally out of character.’

Ms Chambers and Mr Ross were pronounced dead at the scene after the crash in the early hours of December 22.

Mr Ross was a double bass player and second year student at the Royal Academy of Music. He performed together with Ms Chambers with the Lincolnshire Youth Symphony Orchestra.

He was a former pupil at Caistor Grammar School from where he won a scholarship to the Purcell School of Music in London.

At the time of his death he was auditioning for major London or-chestras.

Head of Strings at the Royal Academy of Music, Professor Jo Cole, described Alex as someone she would remember fondly.

She said Alex was ‘a dedicated student and had a significant talent, with a marvellous dry sense of humour.’

She added: ‘I will miss him very much.’

Miss Chambers was working as a jewellery engraver and, as a talented double bass player, was continuing to make music with local ensembles.

She loved animals and was having a gap year before taking up Animal Science at university.

In a victim impact statement Charles Ross, the father of Alexander, said the lives of himself and Alexander’s mother Jacqueline had been completely devastated by his death.

‘Alex was our only child. He was an unexpected surprise. He was a source of immense joy to us. There are no happy memories. There are memories of happy times but they are filled with grief.’

David Chambers, the father of Sian, said ‘She had so much to live for. Her future has been stolen from her as has Alex’s. We now have to come to terms with the fact that our daughter, sister and granddaughter is never coming home again.’