Dewayne Brown, 26, ploughed into a married couple in Leicester at 100mph and has been jailed for six years

A drink driver who ploughed at 100mph into a married couple returning home from a date night at the cinema has been jailed.

Dewayne Brown, 26, killed Graham Jennings, 49, and wife Emma, 50, when he lost control of his Ford Fiesta in Leicester.

His careered without braking into the couple’s Citroen Xsara Picasso which then caught fire and exploded.

Mr and Mrs Jennings, of Syston, died at the scene, Leicester Crown Court was told.

Brown, a father of one, pleaded guilty to causing the deaths of Mr and Mrs Jennings by driving dangerously on the night of Saturday August 18 last year.

Father-of-four, Mr Jennings, has two grown-up daughters from a previous marriage and two younger children, aged 10 and 11, with his wife Emma.

Alexander Wolfson, prosecuting, said: ‘When the defendant drove into the back of their car he was travelling in the region of 100 mph.’

One of several witnesses travelling in the same direction as Brown described how his car ‘wobbled’ as the Fiesta overtook.

The Fiesta speedometer read 120 mph after the collision with 4,000 revs on the counter, equating to about 103 mph.

Mr Wolfson said: ‘The emergency services attended and the defendant went to hospital with minor injuries.’

A blood sample taken two-and-half hours later showed that Brown, of Pen Court, Northampton, had 120 milligrams of alcohol in 100 millilitres of blood.

The legal limit is 80 milligrams.

When interviewed, Brown told officers he was an operations manager for a Hinckley based firm, travelling 15,000 to 20,000 miles a year.

He said he had drunk half a pint of cider, some rum and two Peronis in the afternoon.

He was on his way to Thurmaston at the time of the collision, which happened at 11pm. 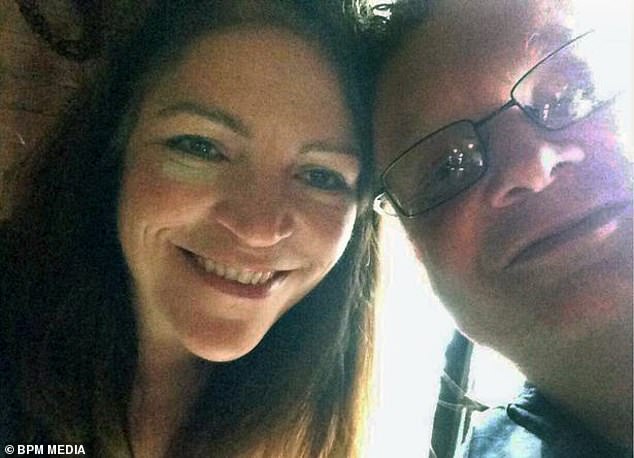 Graham Jennings, 49, and wife Emma, 50, were killed at the scene after a date night at the cinema

Mr Jennings’ daughter, Libbie, 18, read a moving personal impact statement in court, paying tribute to her father and step-mother and describing the deep heartache suffered by her family.

Judge Robert Brown told the defendant: ‘You say you didn’t mean the consequences of what happened that night.

‘I’m sure you didn’t, but what happened that night was the result of deliberate actions taken by you that produced the consequences.

‘You took the decision to drive your car at 100 mph for some minutes.

‘You took the decision to drink alcohol to excess before you got into that car.

‘I note the reading was one and a half times the legal limit on a test two hours after the collision; the alcohol must have been higher in your body at the time of this collision, but to what extent I don’t know.

‘No doubt because of your speed and the alcohol, which affects judgement and reactions, you turned into the carriageway when you could have carried on past him in the other lane.

‘You ploughed into them at grossly excessive speed. There were two deaths that occurred in a manner that was horrific.

‘I accept you have remorse and I’ve read references and see you’re from a good family, are a high achiever in your career and a good member of the community.’

The judge told the Jennings family in court that no sentence he could pass would ever reflect the loss of two precious lives.

Steven Newcombe, mitigating, read out a heartfelt apology letter from the defendant saying: ‘I want the family to know how sorry I am for what happened.

‘I want to express my condolences and deepest and sincerest sympathy to the Jennings’ family.’

Brown stated he never intended to harm anyone that night and he was ‘beyond broken’ and ‘utterly devastated’ with frequent flashbacks of the ‘horrible and tragic’ accident.

He said his pain was ‘insignificant’ compared to the victims’ family.

He said: ‘No-one should have to go through what you’re going through.’

Brown continued: ‘I was raised to understand all actions have consequences and I fully accept that.

‘I’ve left a hole in the Jennings family that will never heal.’

He said he was deeply ashamed and also apologised to everyone in court, including his own family for letting them down.

Mr Newcombe said Brown, a father of a four-year-old child, had no previous convictions and a clean driving record.

He was also the youngest operations manager within his organisation with a bright future.

Brown has been jailed for six years and banned from driving for seven years.