Drinker scarred after being kicked in face with stiletto

A reveller was left with horrific scarring after being kicked in the face with a stiletto by a woman dressed as Alice in Wonderland as a Halloween party ended in real horror.

Amy Davidson, 26, was left with a permanent gash around her lip after being kicked in the face by Fran Drury, who has been spared a jail sentence for the horrific attack.

Miss Davidson, who was dressed as Harley Quinn, was saved by boyfriend Darren Knight, 46, still in his costume as The Joker, but only after sustaining a wound that needed 17 stitches and plastic surgery. 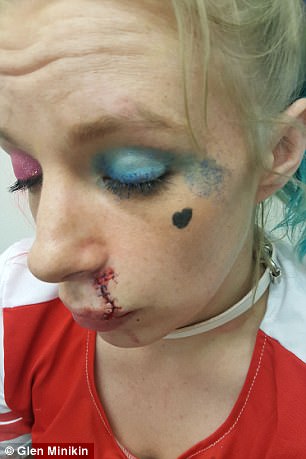 Amy Davidson, 26, was left with a permanent gash around her lip after after being kicked in the face by Fran Drury 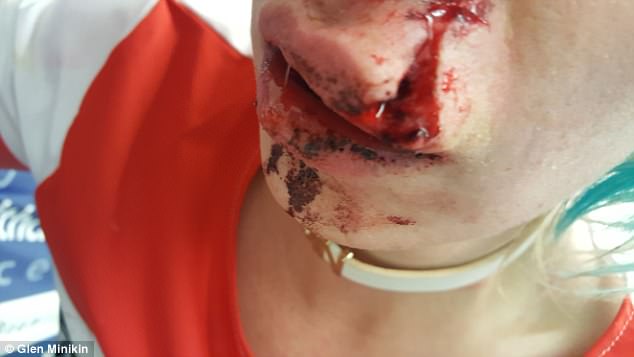 These pictures taken while she was in hospital show the extent of her injuries. The green hair from her Harley Quinn costume can still be seen

The mayhem broke out last Halloween after a fancy dress night at the Tap and Spile pub in Guisborough, North Yorkshire.

Miss Davidson, who is a pub manager, had enjoyed a similar night at her own premises in Middlesbrough before she and Mr Knight went to Guisborough, where he runs the door staff.

At the end of the night Drury refused to leave and Darren and other doormen removed her outside the pub, where she lay in wait until 3am.

As the couple emerged to go home Drury flew at them, landing several punches on Darren and when Amy tried to intervene she was kicked in the face by screaming Drury. 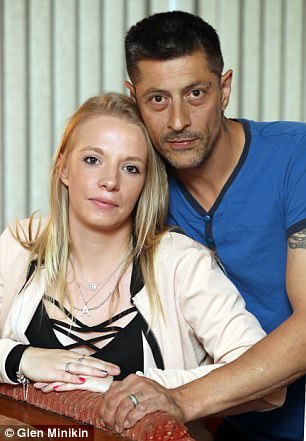 Miss Davidson, who was dressed as Harley Quinn, was saved by boyfriend Darren Knight (pictured together)

But a judge provoked fury by freeing Drury, 43, at Teesside Crown Court, instead opting to hand her a suspended sentence.

Miss Davidson said: ‘It had been a really fun night, everyone was in fancy dress and getting into the spirit of it, but she was trying to ruin it for everyone by getting aggressive.

‘Darren and the doormen removed her and she was determined to get her own back so she waited outside.

‘As soon as I felt her foot connect with me the blood started to pour down my face. There was a flash of pain but I had no idea how badly injured I was and wanted to go home.

‘Darren took one look at me and said “we need to get you to a hospital.”

‘When I saw the wound I was horrified, it was a deep slash from my lip up my face and I knew I’d be scarred for life. I had 17 stitches out in at James Cook Hospital in Middlesbrough but I still need plastic surgery later this year.

‘It’s a reminder of that night that I’ll have for the rest of my life and it’s had a massive effect on me.

‘People say that when I have make-up on they can barely see it, but it’s the first thing I see when I look at myself. I’m now nervous in rowdy situations and don’t go out as much, I’m generally much less confident.

‘When she was coming to court the CPS lawyer said to expect her to get around two and a half years. I couldn’t believe it when she walked away free. 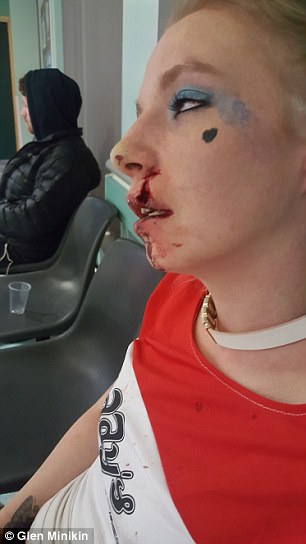 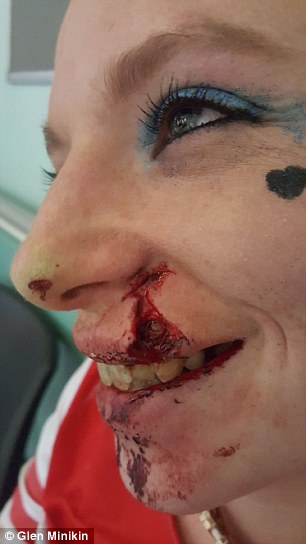 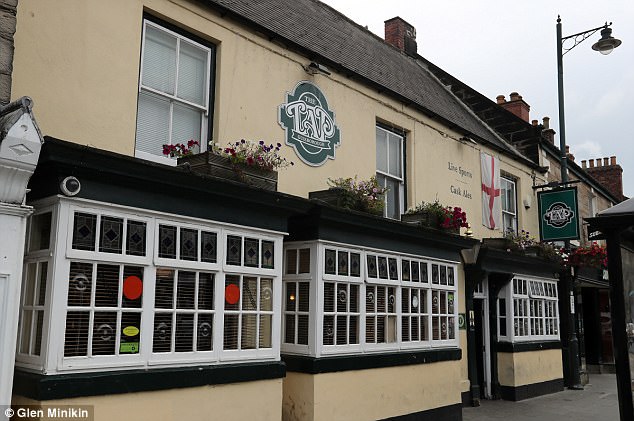 The shocking assault took place outside the Drury at the Tap and Smile pub (pictured) in Guisborough, North Yorkshire

‘The judge was sold a sob story and he believed it. He got one thing right at least – I definitely don’t approve, she should be in jail.’

Mr Knight, who also runs a car body shop said: ‘I’ve seen a lot working on the doors but that was the most vicious thing I’ve ever witnessed.’

Prosecutor Jenny Haigh said Drury lashed out at Mr Knight, punching him to the head two or three times.

When his girlfriend intervened, she too was punched and dragged to the floor, and as Drury was pulled away, her stiletto-shod foot caught her face.

‘She’s clearly drunk and aggressive, and throws a shoe after the taxi,’ Ms Haigh added.

Drury was given a two-year prison sentence, suspended for two years, and a restraining order which bans her from going near the couple or either of the pubs.

Michael Bosomworth, defending, said Drury suffers from a number of physical and mental health difficulties, but refuses to accept she has a problem with alcohol.

He told the court: ‘This is a tragic case all ways around.

‘It is tragic because this lady has been left with a scar which is going to trouble her for the rest of her life. 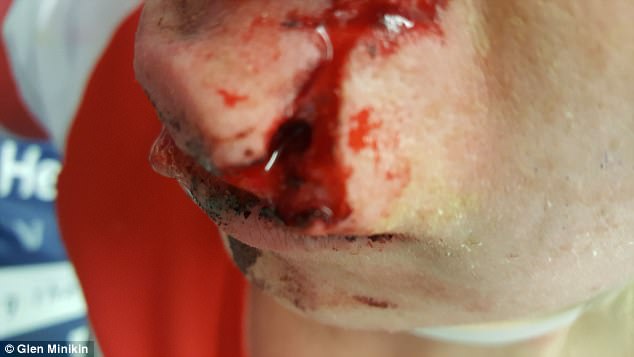 Miss Davidson was punched and dragged to the floor, and as Drury was pulled away, her stiletto-shod foot caught her face 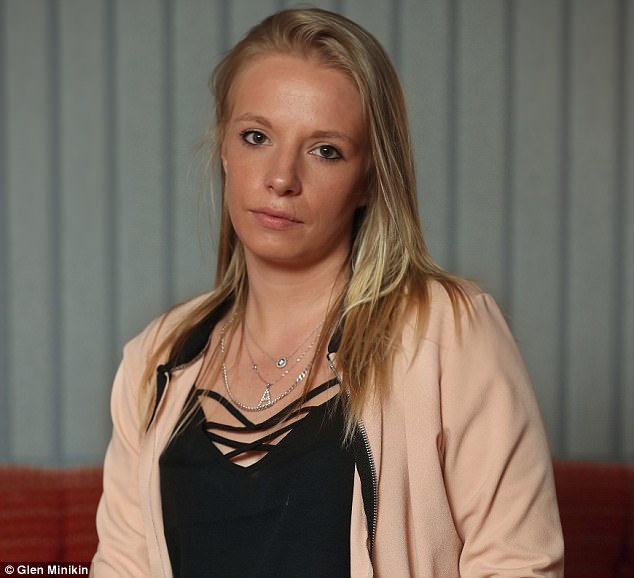 The victim (pictured after she cleaned up) said: ‘People say that when I have make-up on they can barely see it, but it’s the first thing I see when I look at myself’

‘It is tragic because it is clear the defendant, who appears before you a deeply damaged middle-aged lady, who has profound physical and mental health problems which would make it difficult for her in custody.

‘She needs help, but she needs to take help, and be open with those who try to help her.

‘Miss Drury stoutly refuses to accept she has got an alcohol problem, because she doesn’t want to be referred to as an alcoholic, because many of her friends have gone down that route.

‘This was as a result of binge-drinking and the medication she had taken.’

Mr Recorder Nolan told Drury, who admitted unlawful wounding and common assault: ‘It was a kick with a stiletto, which is the equivalent of weapon, on your victim, who was prone at the time.

‘I have seen a number of reports and it is clear you have problems of various sorts. I am very aware of the sort of difficulties these problems can cause, so on balance I think it is right I suspend the custodial sentence.