Thousands of drinkers headed out on the first weekend after lockdown restrictions were eased while millions are expected to hit the high streets today in a £10billion Covid spending spree.

Revellers were seen flocking to bars in Soho, London, and braving the wintry weather in York last night after the second lockdown in England came to an end earlier this week and entered a strengthened tiered system.

Britain’s stores are also braced to see a spending boom on the first non-working day since lockdown ended on December 2, as shoppers rush to snap up Christmas deals with prices slashed by up to 80 per cent.

One market research agency predicted that a whopping £10billion could be spent in stores alone this weekend, with 56 per cent of shoppers ready to spend more than they planned for the festive period.

The number of customers visiting stores rocketed by 85.2 per cent on ‘Wild Wednesday’ – the day England came out of its second lockdown – with the rise ‘virtually double’ what had been expected, according to Springboard.

It comes as two out of three smaller firms and self-employed workers have had to stop trading at some point in the past six months because of the coronavirus crisis, new research suggests.

Pubs have had their curfew extended to 11pm but are grappling with the fresh regulations. In Tier 2, they can only serve alcohol with a ‘substantial meal’ and in Tier 3 they are limited to just takeaways.

Meanwhile, the UK’s chief medical officers have warned the Covid vaccine will only have a ‘marginal impact’ on hospital numbers over the winter as the four nations prepare to start administering the first doses next week.

Revellers in York headed out last night despite the wintry weather. Pubs have had their curfew extended to 11pm but are grappling with the fresh regulations, with the majority of England under Tier 2 restrictions 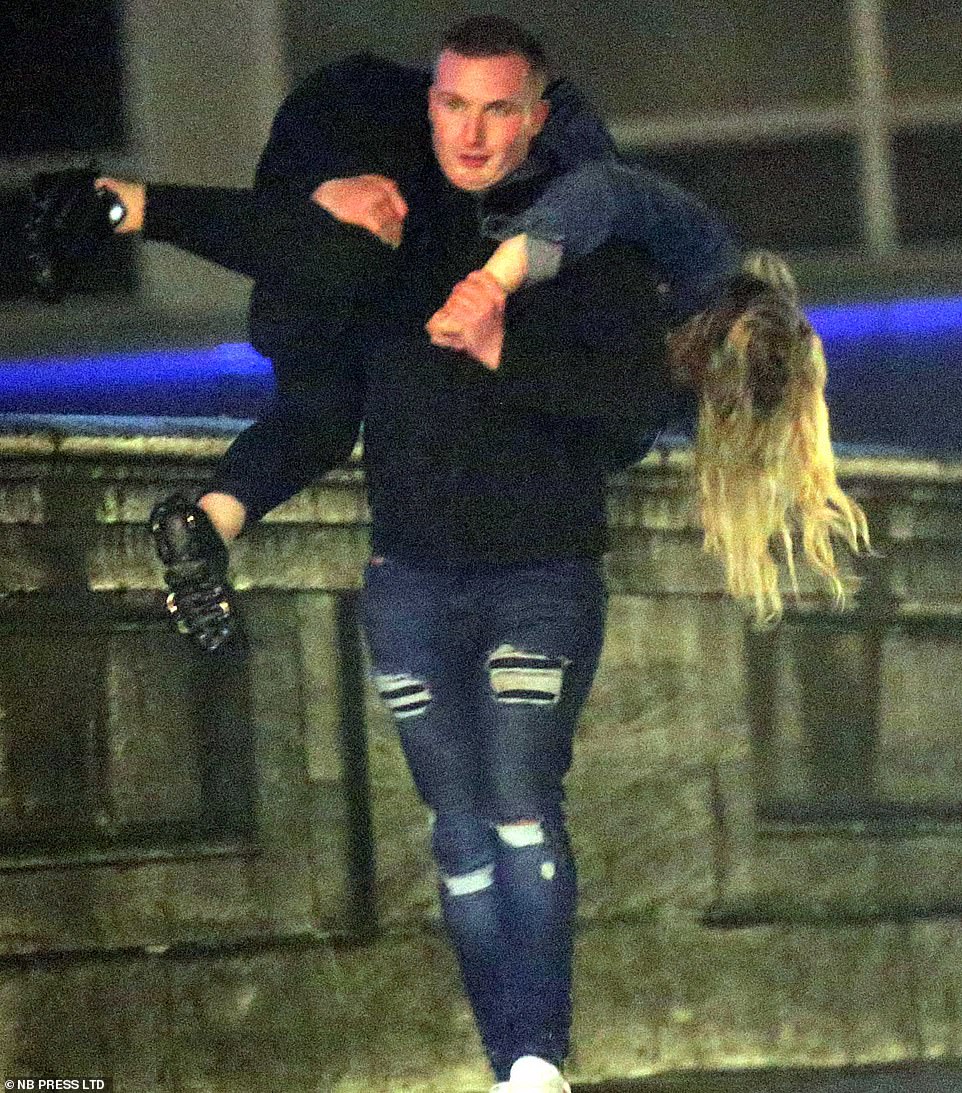 Revellers in York on Friday night braving the wintry weather ahead of the first weekend after lockdown restrictions were eased. Under Tier 2 restrictions, pubs can only serve alcohol with a ‘substantial meal’ 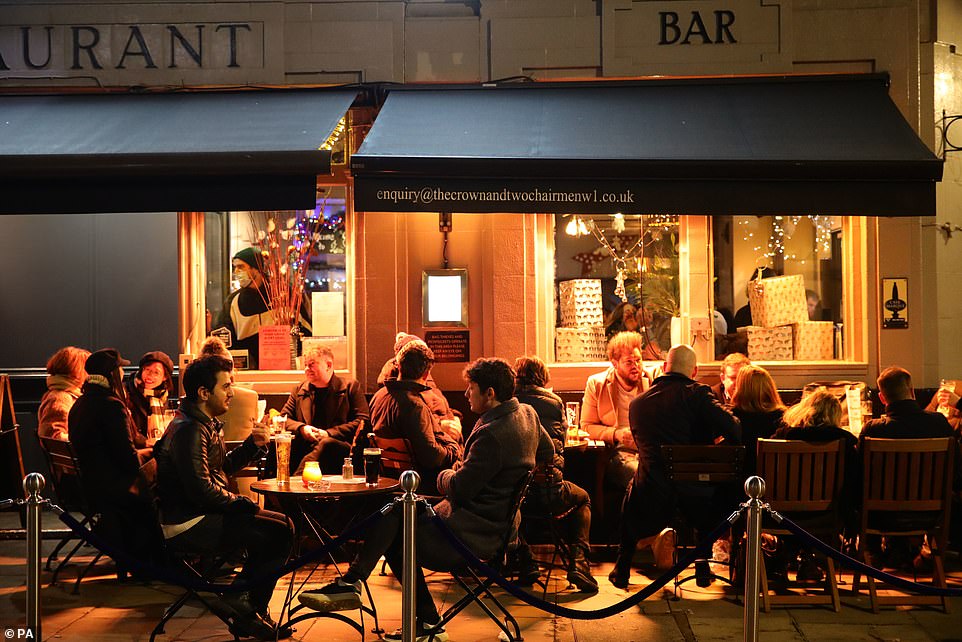 People drinking outside a bar in Soho, London, after coronavirus restrictions were relaxed following the end of the second national lockdown in England on December 2, with the majority of the country being placed in Tier 2 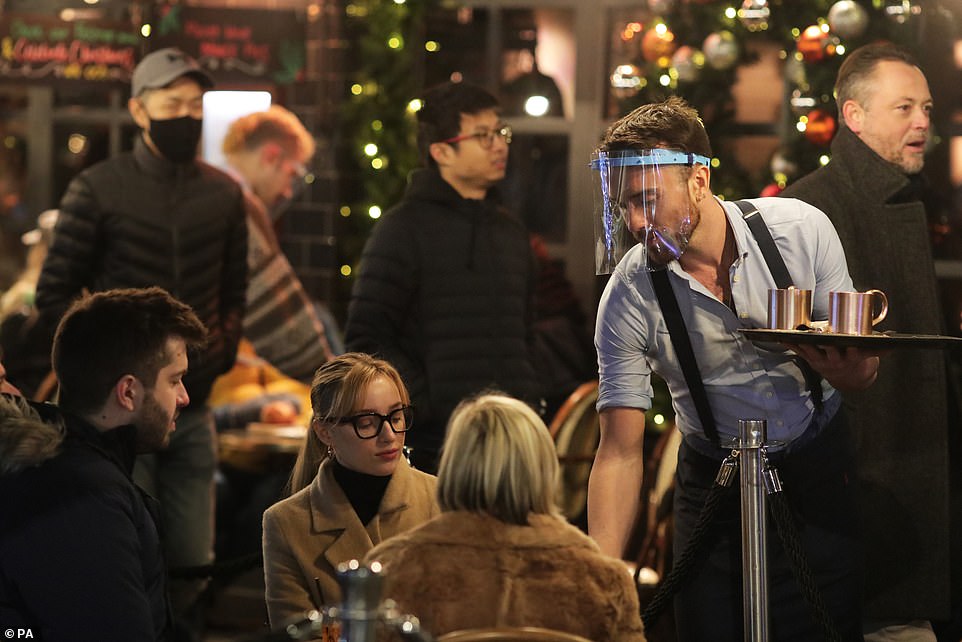 People being served outside a bar in Soho, London, after the second national lockdown came to an end earlier this week and England entered a strengthened tiered system of coronavirus restrictions

Andy Bromley, director of Spark Emotions, told the Daily Express: ‘We predict that up to £10billion could be spent in physical retail alone this weekend as shoppers return to the high street.

‘This week we conducted our monthly Mood Of The Nation survey, which measures shopper attitudes and spending habits, and it revealed that the prospect of going back to stores to conduct Christmas shopping increased shoppers’ levels of excitement and happiness.

‘Retailers will be looking to tap into this positive emotional state, with 56 per cent of shoppers in the survey saying they are prepared to spend more than they planned to enjoy Christmas.’

The prediction comes amid estimates that Covid-19 could cost small businesses up to £69billion in total, according to insurers Simply Business.

In a report to mark Small Business Saturday, the firm said many small business owners live in fear of the consequences another national lockdown would have on their business.

A separate study by American Express suggested that almost half of non-essential independent retailers believe the survival of their business is dependent on the sales they are able to make between reopening on December 2 and Christmas.

Labour leader Sir Keir Starmer said: ‘Small businesses across the country have made a monumental effort during this crisis. ‘They have stepped up when it was most needed, supporting their local communities and making huge sacrifices to help tackle the spread of the virus. 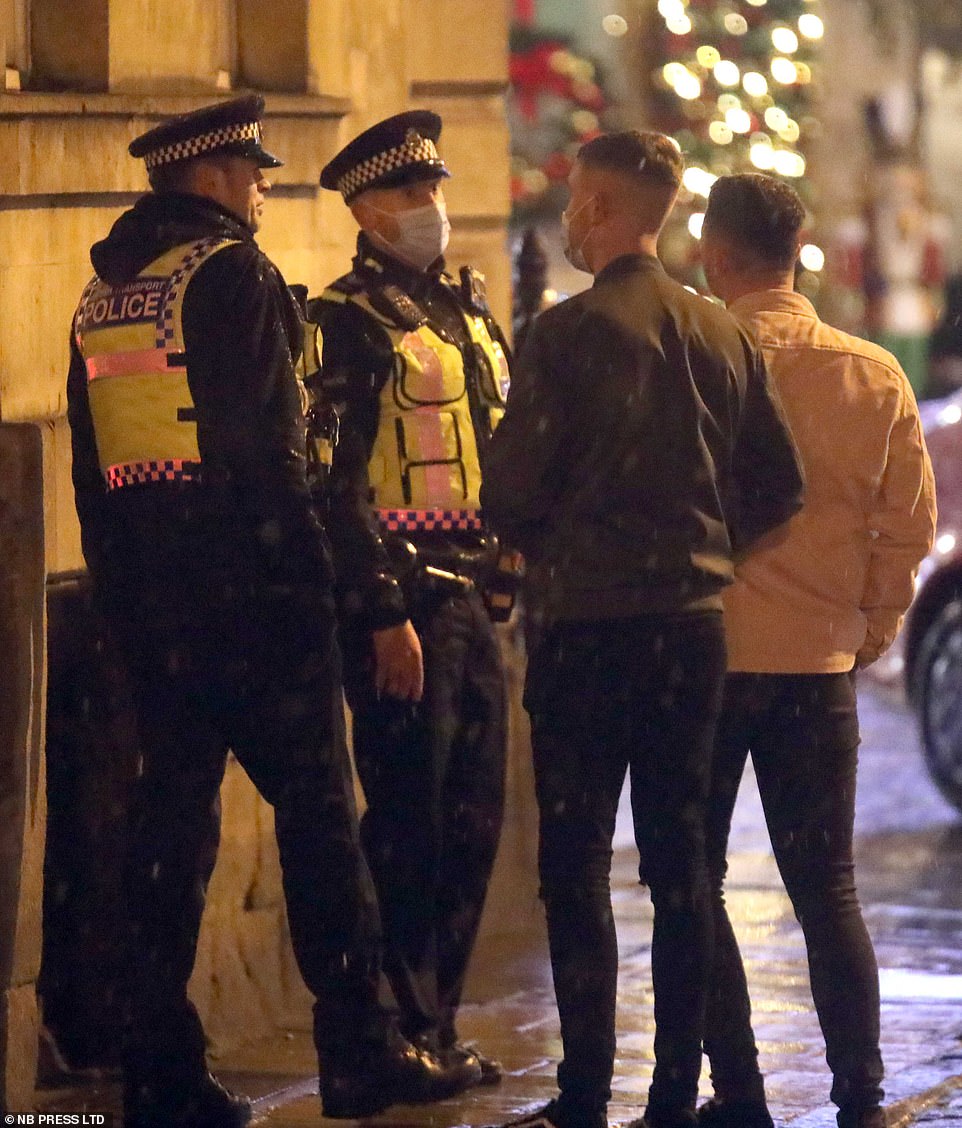 Two police officers talk to revellers on Friday night in the city of York, as Britons headed out despite the wintry weather 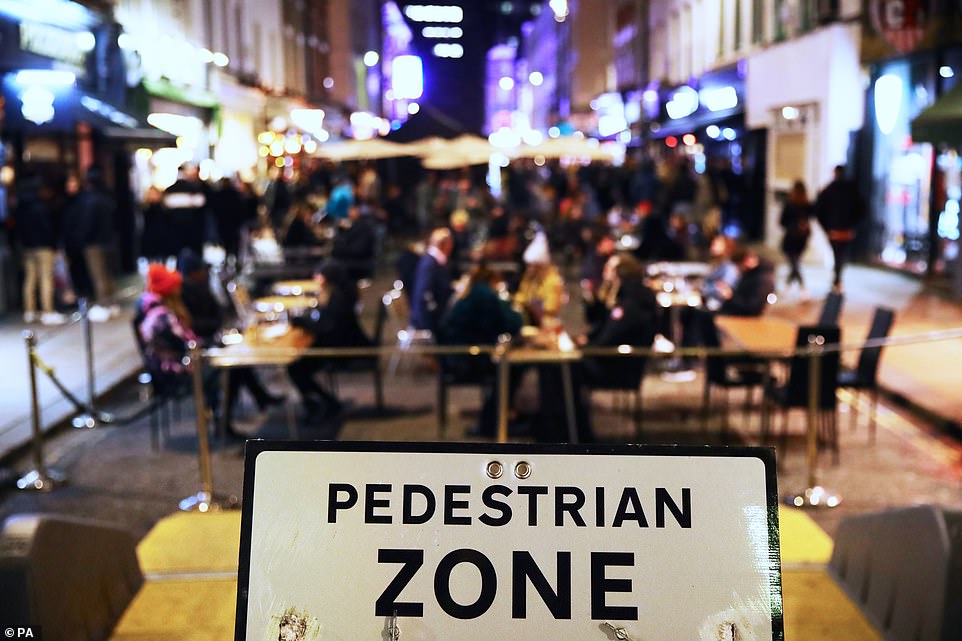 A pedestrianised zone in Soho, London, filled with evening drinks after coronavirus restrictions were relaxed following the end of the second national lockdown in England on December 2 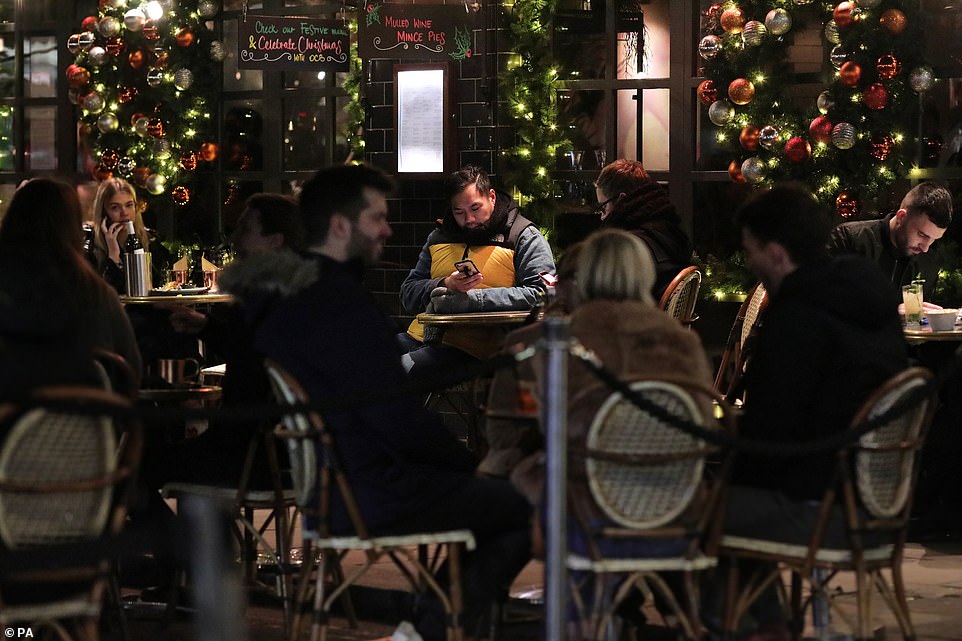 People drinking outside a bar in Soho, London, after England entered a strengthened tiered system of coronavirus restrictions. In Tier 2, pubs can only serve alcohol with a ‘substantial meal’ and in Tier 3 they are limited to just takeaways 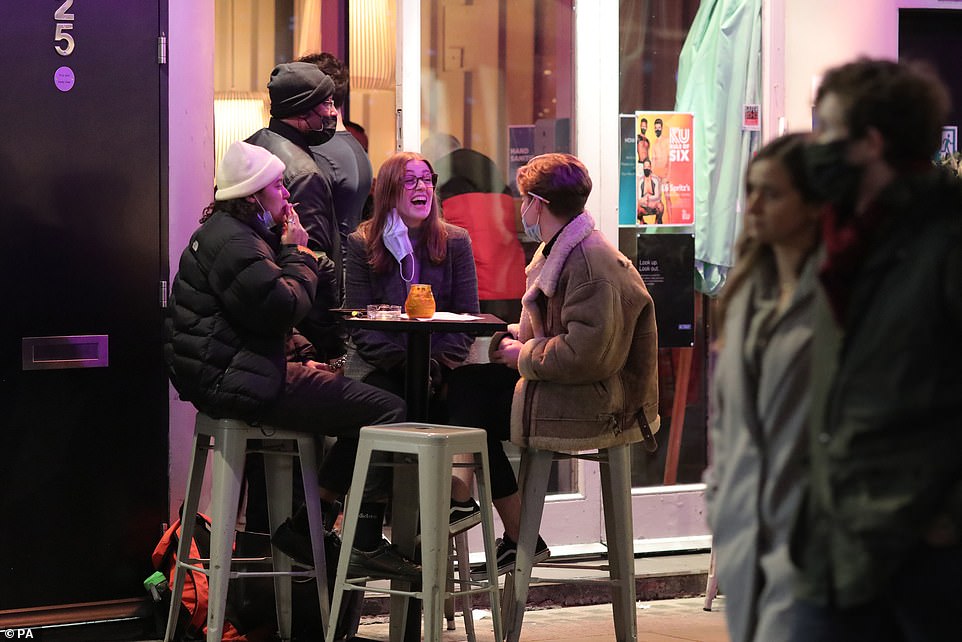 Three people are pictured sat around a table as they drink outside a bar in Soho, London, on Friday night after the second national lockdown came to an end in England 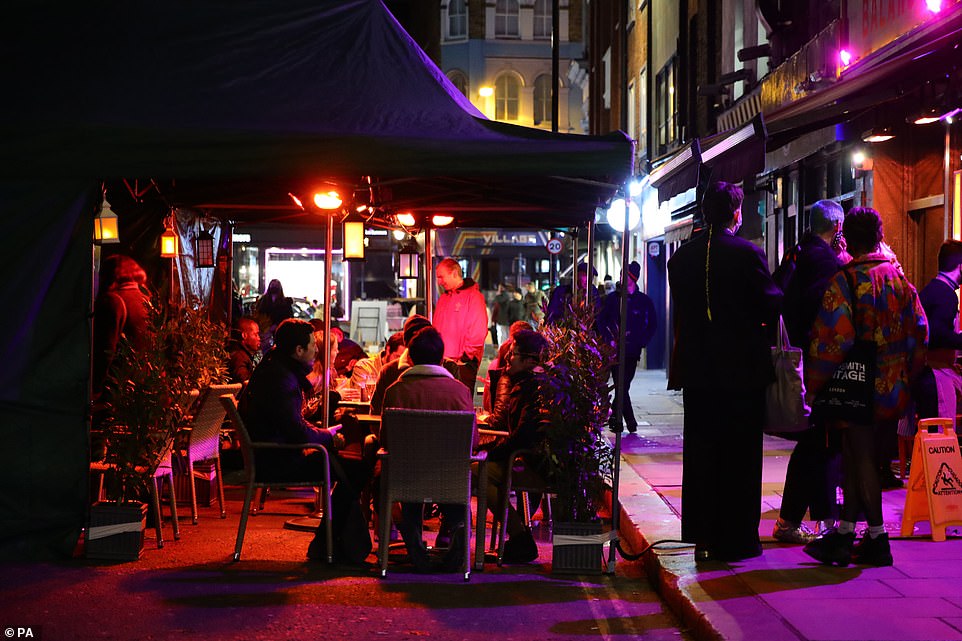 People drinking outside a bar in Soho, London, after the coronavirus restrictions were shifted to a tiered system following the end of the second national lockdown in England

‘Now we must repay them. This Small Business Saturday and beyond, we can all do our bit to stand by small businesses, by shopping safely where we live, including online, or ordering from local restaurants.’

Ed Miliband, shadow business secretary, added: ‘Shops, pubs, manufacturers, hotels and hairdressers, beauty salons and suppliers, breweries and bakeries, and small businesses of all kinds have been on the frontline of the economic crisis.

‘This is a day to celebrate the millions of these small businesses at the heart of our communities and the workers they employ. They represent the best of our country.’

Michelle Ovens, director of Small Business Saturday UK, said: ‘Lockdown and the closure of non-essential shops has led to a compressed Christmas trading period for small retailers in a vital time for many small shops.

‘We are optimistic that with shops now able to reopen and many small firms being really entrepreneurial about the tactics they use to attract shoppers – including making the most of Small Business Saturday UK – that they will be able to make up lost sales. 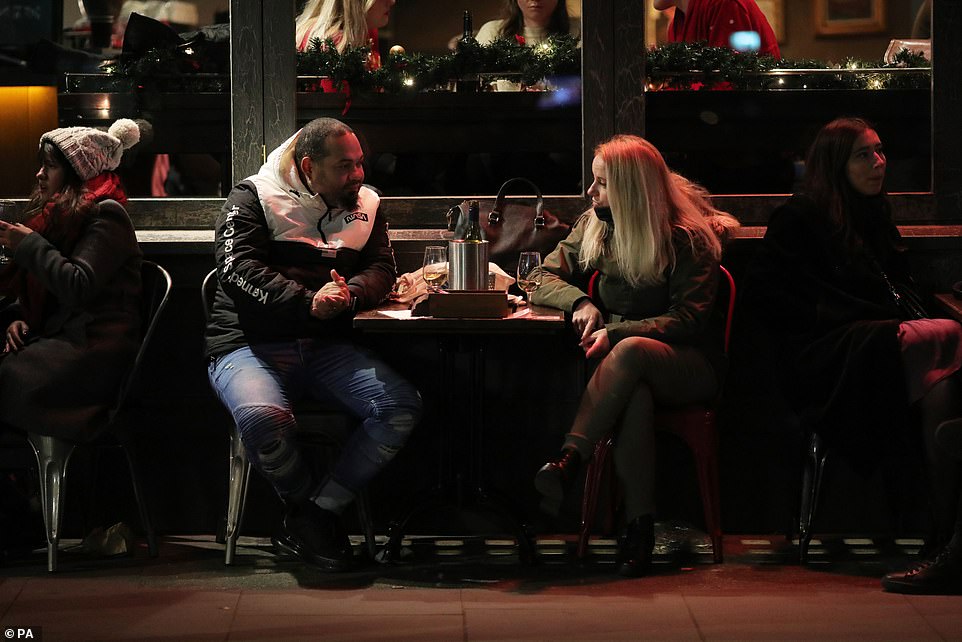 People drinking outside a bar in Soho, London, after England entered a strengthened tiered system of coronavirus restrictions following its second lockdown 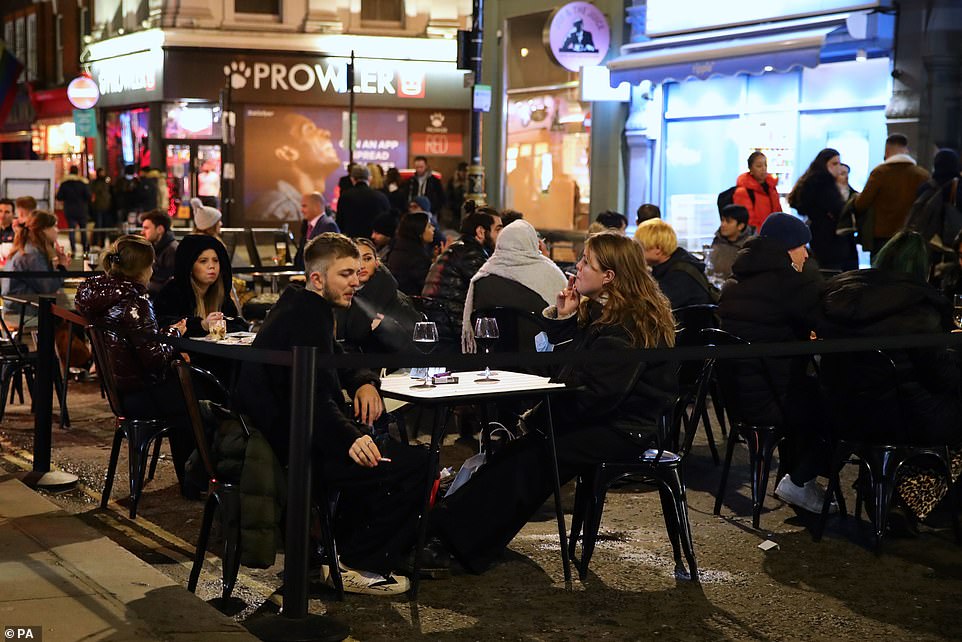 Groups of people sit outside a bar in Soho, London, on Friday night. The majority of the UK is under Tier 2 restrictions 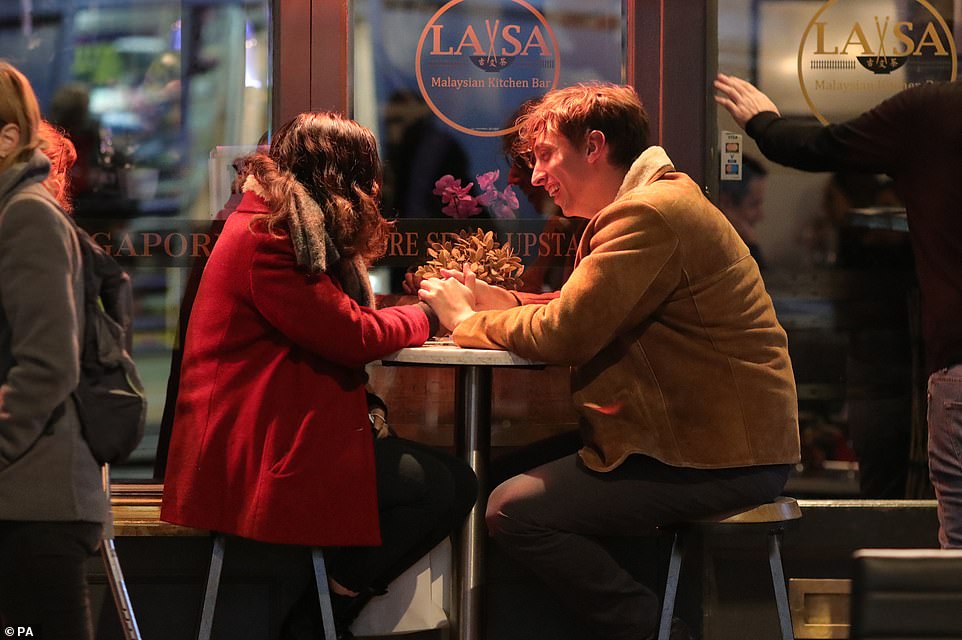 A couple drink outside a bar in Soho, London, last night ahead of the first weekend after the second national lockdown in England came to an end on Wednesday 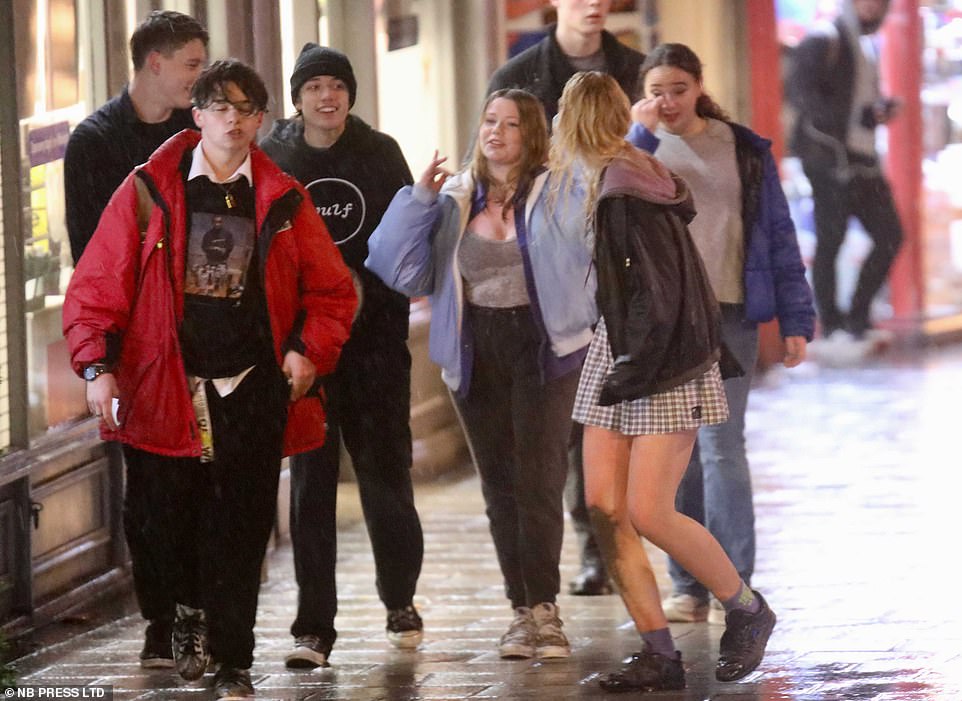 A group of revellers head out in York, which has been placed under Tier 2 restrictions, meaning that pubs can serve alcohol if it is accompanied by a substantial meal 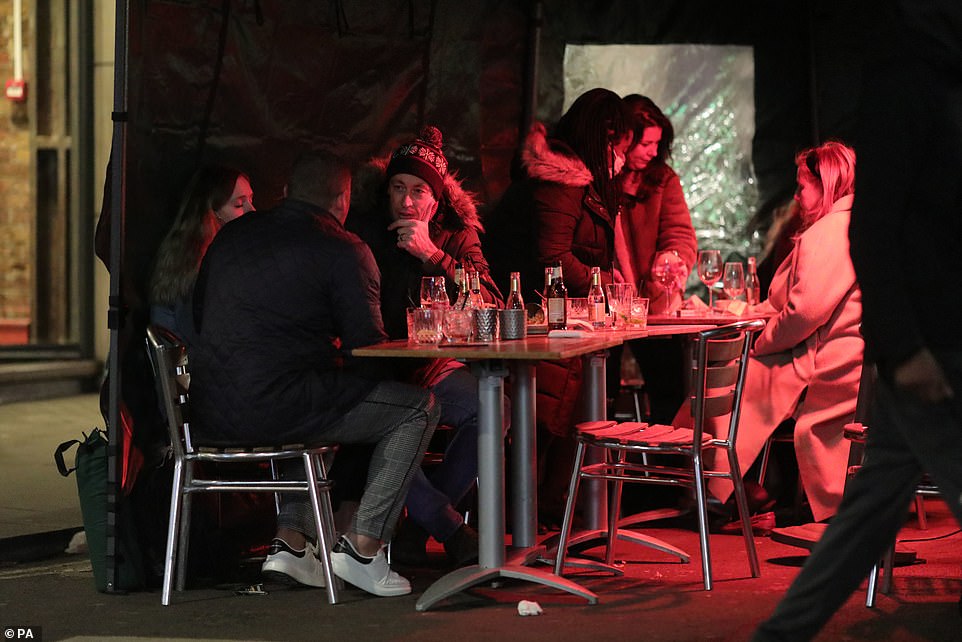 People drinking outside a bar in Soho London, under a sheltered area after the second national lockdown came to an end and England entered a tiered system of coronavirus restrictions

It comes as GPs in England are set to start vaccinating people against coronavirus from December 14. Those aged 80 and over will be the first to receive the jabs, which will be administered at vaccination centres formed by groups of GP practices.

The UK became the first country in the world to approve the jab on Wednesday, after regulators gave it the green light in the wake of evidence showing it was up to 95 per cent effective and safe.

But experts have warned that festive gatherings are likely to put additional pressure on healthcare services, with a tough few months still ahead.

In a letter to colleagues, the four chief medical officers said this winter would be ‘especially hard’ for the health service due to coronavirus.

They wrote: ‘Although the very welcome news about vaccines means that we can look forward to 2021 with greater optimism, vaccine deployment will have only a marginal impact in reducing numbers coming into the health service with Covid over the next three months.

‘The actions and self-discipline of the whole population during lockdowns and other restrictions have helped reduce the peak and in most parts of the four nations hospital numbers are likely to fall over the next few weeks, but not everywhere.

‘The social mixing which occurs around Christmas may well put additional pressure on hospitals and general practice in the New Year and we need to be ready for that.’