Drinkers in a town on the English and Welsh border will be able to return to the pub on Saturday – but only at one end of the high street.

In Saltney, which is partly in Flintshire, North Wales, and partly in Cheshire, England, just one of the town’s four pubs will be allowed to open its doors again on Saturday while the others remain closed under the Welsh Government’s regulations.

The Brewery Arms, which is separated from Wales by a railway bridge, is gearing up to welcome punters back with social distancing measures but sister pub the Corner Pin, about half a mile down the town’s High Street, has no date set for reopening.

The Anchor Hotel, which sits directly next to the piece of land which the border runs along, has also just missed out on opening back up for business.

Pubs across the UK called last orders on March 20 as the country went into lockdown amid the coronavirus pandemic.

While Prime Minister Boris Johnson has given establishments in England the green light to reopen on Saturday, Welsh First Minister Mark Drakeford is yet to announce when pints can be served again.

Alan Banks, the landlord of the Anchor Hotel in the town of Saltney, which is partly in Flintshire, North Wales, and partly in Cheshire, England. They are on the Welsh side so will not be reopening 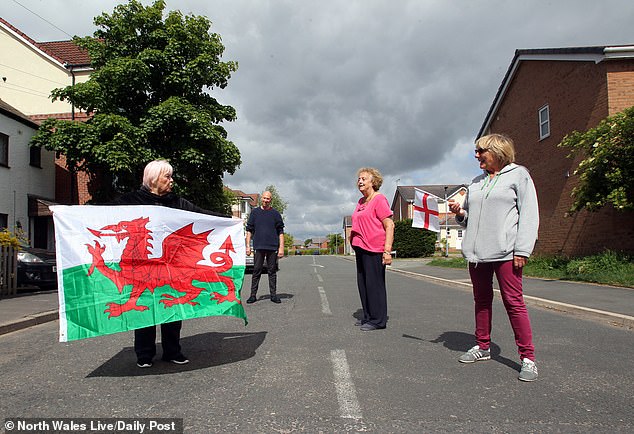 The border between England and Wales runs down the middle of Boundary Lane in Saltney, meaning each side of the road is in a different state of lockdown 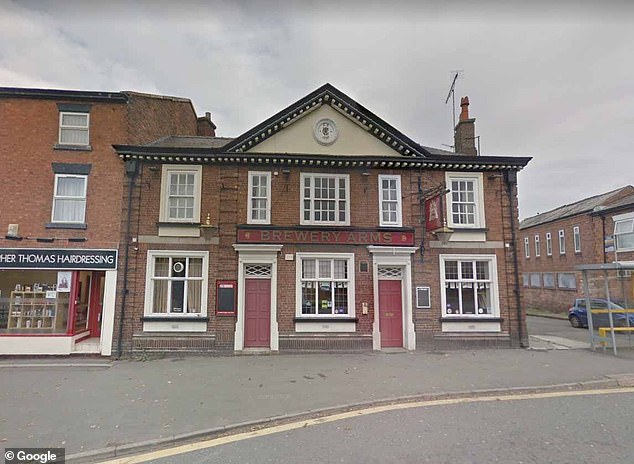 The Brewery Arms, (pictured) which is separated from Wales by a railway bridge, is gearing up to welcome punters back with social distancing measures but sister pub the Corner Pin, about half a mile down the town’s High Street, has no date set for reopening

Paul Gabbutt, area manager of Winwick Taverns, which runs both the Brewery Arms and the Corner Pin, said: ‘The two pubs are about half a mile apart but we have still got no guidance on how the Corner Pin will reopen and we don’t know a date.

‘At the Brewery Arms we’ve been doing risk assessments and online staff training, and making it compliant so we’ll be able to reopen.

‘It doesn’t make any sense, you can walk from one pub to the other.’

The differing rules mean that border towns are in the midst of confusion as English and Welsh government’s follow two different states of lockdown advice during the coronavirus pandemic. 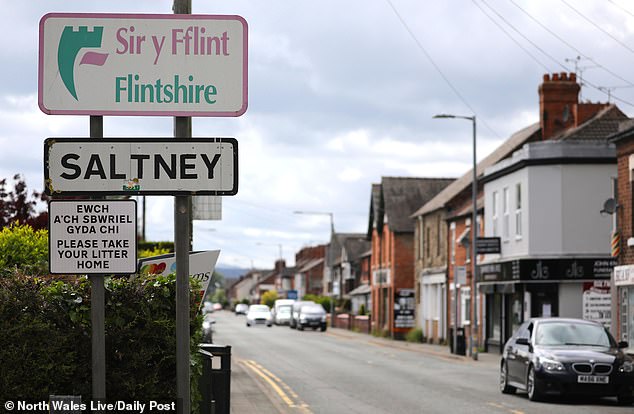 Saltney has roads divided between an English local authority and a Welsh one, meaning bins are only being collected on one street

On the Wales side, there are tougher rules, where Stay at Home is still the dominant message, people must maintain social distancing of two metres and ‘stay local’ if possible.

A number of non-essential businesses such as pubs and restaurants are also still shut, with no reopening time yet announced.

Why can only one pub reopen in Saltney?

Each country within the United Kingdom has been setting their own rules during the pandemic specific to their circumstances.

In this case England has relaxed its lockdown rules that were imposed on March 20.

Boris Johnson announced earlier this month that a number of premises could throw open their doors from Saturday, including pubs, cinemas and restaurants.

Mr Johnson has also relaxed the social distancing measures to ‘1-metre-plus’, meaning you can be 1 metre away from each other as long as other measures are put in place to limit the transmission of the virus.

However Wales has not yet relaxed its rules around the hospitality industry, meaning their pubs are staying closed on July 4.

Welsh First Minister Mark Drakeford is yet to announce when pints can be served again, meaning a number of pubs in the border town will have to remain closed.

But in England, the PM has relaxed the rules allowing a number of non-essential businesses to open on July 4, such as restaurants and pubs.

He has also relaxed the social distancing measures to ‘1-metre-plus’, meaning you can be 1 metre away from each other as long as other measures are put in place to limit the transmission of the virus.

Alan Banks, landlord of the Anchor, said customers had been eager to know when they could return.

Mr Banks said: ‘There has been a little bit of confusion with customers asking us if we are reopening on July 4.

‘I tell them they have got to remember we are in Wales and we are a little bit behind England.

‘Customers should know they won’t be able to come in here on Saturday. But the pub a few hundreds yards up the road will be able to reopen.’

He said managers from the Corner Pin and the Saltney Tavern, which will also remain closed, would be joining him later in the week for a webinar with licensing bosses which they hoped would answer some questions.

Mr Gabbutt said the Brewery Arms was expected to be busy on Saturday as it would be the only pub able to serve beer in the town, near Chester.

He said: ‘We’re trying to do social distancing so really it would have been better that all the pubs were open.

‘The Brewery is going to be the only pub in Saltney.’

Last week, Welsh finance minister Rebecca Evans said talks with the hospitality sector were ‘ongoing’, but detailed timings could not be given.

Mr Banks said he had been busy decorating the pub and improving the beer garden as he waited for guidance on how he could reopen, including whether the two-metre rule would be relaxed in Wales as it had been in England.

He said: ‘When they closed the pubs it was 100% closure across the UK.

‘Now it seems a bit like it’s one person just not wanting to follow the lead of somebody else, when you see the attitude of our government compared to the English.’