Drinking alcohol has been found to damage DNA – causing an increased chance of breast cancer and other major types of the disease.

Now researchers have found for the first time ‘a simple plausible explanation’ of why alcohol can causes our cells to go haywire – by causing damage to our DNA.

The breakthrough is claimed to explain how seven types of tumours form, including those of the mouth and throat, liver, colon, bowel and breast.

When alcohol is broken down in the body it forms a poisonous chemical, known as acetaldehyde.

Small amounts can be mopped up by our bodies. Yet too much damages stem cells in our bodies – the ‘master cells’ which generate new cells. This raises the risk they will go rogue and form cancerous tumours.

Drinking alcohol has been found to damage DNA, causing an increased risk of breast cancer

TELLING STUDENTS NOT TO ‘DOWN’ ALCOHOL MAKES THEM DRINK MORE

Telling students not to ‘down’ alcohol makes them drink more, research suggested in August.

Disapproving of drinking alcohol in one go, known as ‘bolting’, makes people more inclined to gulp their booze, a study review found.

Warning others about the dangers of downing drinks has no effect on the likelihood they will do it, the research adds.

Yet, telling them that most people do not bolt drinks on a night out does reduce the risk they will, the study found.

Study author Professor Charles Abraham from the University of Exeter, said: ‘This demonstrates how careful we need to be in selecting the right message in campaigns, and evaluating them before wider dissemination, as poorly designed campaigns, however well-intentioned, can backfire.’

It has been estimated almost six per cent of all cancer deaths worldwide could be attributed to alcohol.

In the UK, booze is linked to 12,800 cases of cancer – four per cent of total cancer cases.

Of these, 3,200 cases of breast cancer are caused by alcohol, according to Cancer Research UK.

Even light drinking can slightly raise a woman’s risk of breast cancer, the NHS advises.

Heavy drinkers face a greater risk of mouth and throat cancer, cancer of the voice box, liver and colorectal cancers.

They analysed the DNA in the mice to examine the damage caused by acetaldehyde.

Acetaldehyde has long been known to be cancer-causing. But the mechanism by which it works was unclear.

The chemical causes breaks in both strands of the DNA ‘double helix’ making them become jumbled up.

Alcohol is not thought to cause blood cancers, however, the same mechanism is believed to apply to stem cells in other organs of the body. 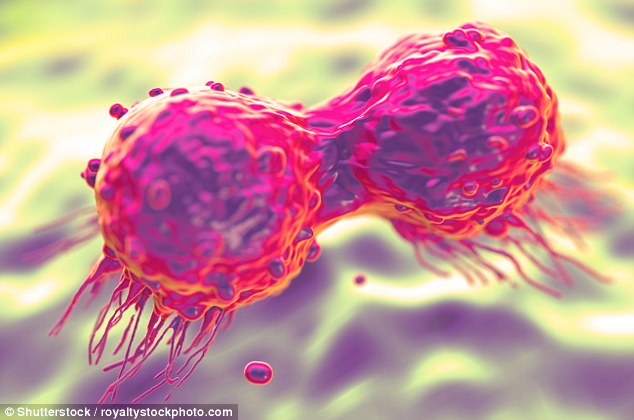 ‘While some damage occurs by chance, our findings suggest that drinking alcohol can increase the risk of this damage.’

The body can dispose of acetaldehyde by producing enzymes that break the chemical down.

Another protective mechanism is a variety of DNA repair systems which, most of the time, allow them to fix and reverse different types of damage.

But there are limits to how much damage can be repaired and in some people the repair process is faulty.

Professor Patel said: ‘Our study highlights that not being able to process alcohol effectively can lead to an even higher risk of alcohol-related DNA damage and therefore certain cancers.

‘But it’s important to remember alcohol clearance and DNA repair systems are not perfect and alcohol can still cause cancer in different ways – even in people whose defence mechanisms are intact.’

Cancer prevention expert Professor Linda Bauld, of Cancer Research UK, which part-funded the study, added: ‘This thought-provoking research highlights the damage alcohol can do to our cells – costing some people more than just a hangover.

‘We know alcohol contributes to over 12,000 cancer cases in the UK each year so it’s a good idea to think about cutting down on the amount you drink.’