Driver, 21, is thankful when car crash stops her going to have sex with her ex

‘That’s the universe telling me I’m making a mistake!’: Driver, 21, is thankful when car crash stops her going to have sex with her ex

A young woman believes the universe has spoken to her after she crashed her car while on the way for a rendezvous with her ex-boyfriend.

Financial administrator Chloé Langton, 21, was driving in her Ford Fiesta to her former flame’s home when she collided with another driver at a roundabout.

Miss Langton, from Hinckley, Leicestershire, then posted a picture of the damage to her £6,000 car on social media and admitted her shame at her plan. 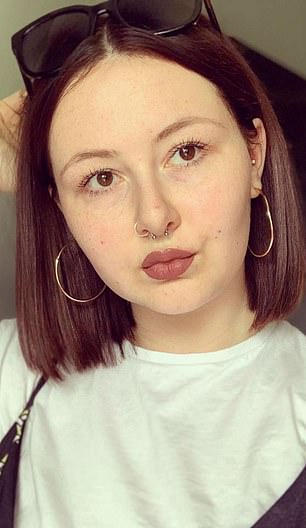 Chloé Langton, 21, left and right, has revealed she crashed her car last weekend while on the way for a rendezvous with her ex-boyfriend and said it was the universe’s way of telling her she was making a mistake

She wrote on Twitter: ‘Started driving to my ex’s house to s**g him and ended up crashing my car.

‘That’s one way for the universe to tell me I’m making a mistake.’

Do you know the ex?

Speaking today Chloé said: ‘When I was driving on Saturday afternoon someone was coming round a roundabout in the lane to the left to come off but they then carried on straight instead.

‘There was a car in front of me that went to pull out but then had to brake due to the t*** in the wrong lane and when he slammed his brakes on I then went into the back of him.’

Miss Langton added: ‘My ex is super-bad for me. We’re not romantically involved. I left him but we still sleep together every now and again.’ 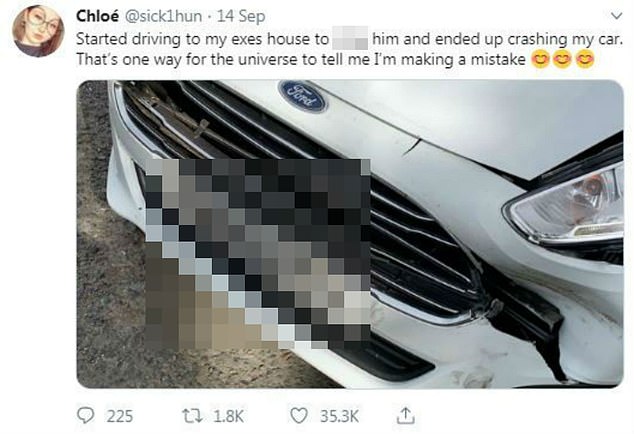 She added: ‘The car is fine I’ve just got to sort out paying my excess and it’ll be fixed.’

Other social media users were quick to poke fun at Chloé’s timely misfortune.

Layla Jones added: ‘Imagine his disappointment when you tell him you’ve crashed though.’