Driver, 32, who killed 71-year-old grandfather in crash is jailed for more than three years

A grandfather to 19 children was killed by a speeding father-to-be who tried to ‘beat the lights’ on a busy road so he could surprise his partner ahead of her first baby scan.

Kevin Tanner, 32, was jailed today for mowing down 71-year-old Patrick Gerrard Hughes, known as Gerry Hughes – even though he was wearing bright high-visibility clothing as he crossed the road.

A court heard Tanner was dashing to see his pregnant girlfriend who was due to have the first scan on their unborn child.

Father-of-five Mr Hughes was wearing the full high-visibility  gear as he walked home to his family from his job as a machine operator.

James Wilson, prosecuting, said: ‘Mr Hughes should have been visible to him. However, Tanner went through the red light.

Mr Hughes – described as a ‘proud family man’ – died of his injuries in hospital a fortnight later.

Witnesses saw Tanner ‘flying’ around the roundabout in his Audi A3 trying to ‘beat the lights’.

Mr Hughes was sent flying three feet in the air and landed on the windscreen of Tanner’s Audi at the roundabout on the A48 in Newport, Gwent, in January.

Tanner told police: ‘I had no idea the lights had changed.’

But collision investigators concluded that the lights had been on amber and then red for at least six seconds.

Tanner had been looking over his shoulder while racing to beat the lights.

Mr Wilson said: ‘If the defendant had been driving properly, he could’ve avoided the collision but he wasn’t and he did not even have time to even attempt to brake.’

In a victim personal statement, Mr Hughes’ wife Frances described the ‘absolute devastation’ caused by his ‘cruel and untimely death.’

She said: ‘He was known as a gentle giant and a very hard working man.’

Nicholas Gedge, defending, said Tanner had been driving to surprise his partner in Newport ahead of the first scan of their then unborn child.

He added: ‘Perhaps the excitement of what was supposed to be a happy occasion got the better of him. 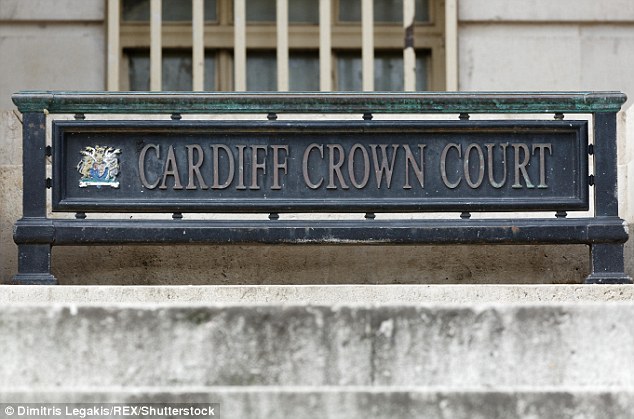 ‘He has been off work since the incident, suffering from anxiety and depression.’

‘Mr Tanner has huge regret and shame for the incident on that day and it’s consequences.’

He was jailed for three years and four months by Judge Jeremy Jenkins.

Judge Jenkins said: ‘You created a substantial risk of danger.

‘You were driving at a speed inappropriate for the situation and failed to show regard for other road users.’

In a statement after his death in February, the family of Mr Hughes, paid tribute to him: ‘Gerry was a proud Irishman who loved rugby.

‘He was a devoted husband to Frances, dad and grandad, a good family man.’

He leaves behind five children and 19 grandchildren.