A 52-year-old man has been arrested on suspicion of dangerous driving after his out-of-control bus smashed into 25 vehicles, injuring 16 people yesterday.

The single-decker was not travelling on its normal route when it ploughed into parked vehicles and motorists waiting at traffic lights in Dartford, Kent.

Witnesses have said the driver, who is from Northfleet, near Gravesend, was in Arriva uniform at the time of the crash. He was taken to hospital and later questioned by police.

A 52-year-old man has been arrested on suspicion of dangerous driving after his out-of-control bus smashed into 25 vehicles, injuring 16 people yesterday

A Kent Police statement said the man has been released pending further inquiries by the Serious Collision Investigation Unit. They have not named him as so far no charges have been applied.

While a spokesperson for the bus company Arriva refused to confirm whether the man was an employee of theirs, adding: ‘Our priority continues to be those affected and in supporting the police in their investigations.’

Stunned shoppers told how cars flew ‘like dominos’ as a video showed the moment it sped along Hythe Street.

Passers-by watched in horror when the No.480 bus to Gravesend sped out of control, with some fearing they were witnessing a terror attack.

But Arriva claimed the bus was not in service at the time of the incident.

‘Our bus was not in service during the time of the incident and was therefore not running to a specific route,’ a spokesperson said. ‘No passengers were on board.’ 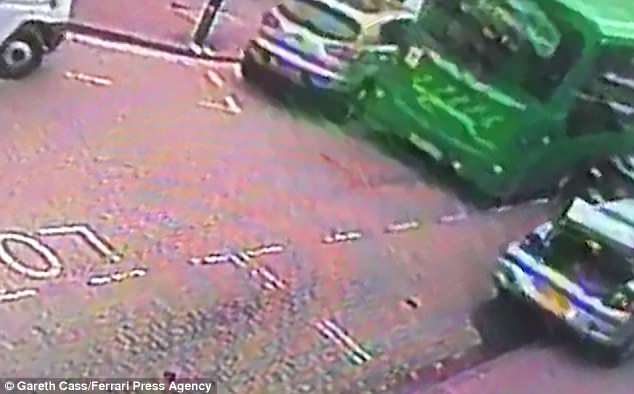 Sixteen people were injured as passers-by watched in horror when the No.480 bus to Gravesend sped out of control, with some fearing they were witnessing a terror attack 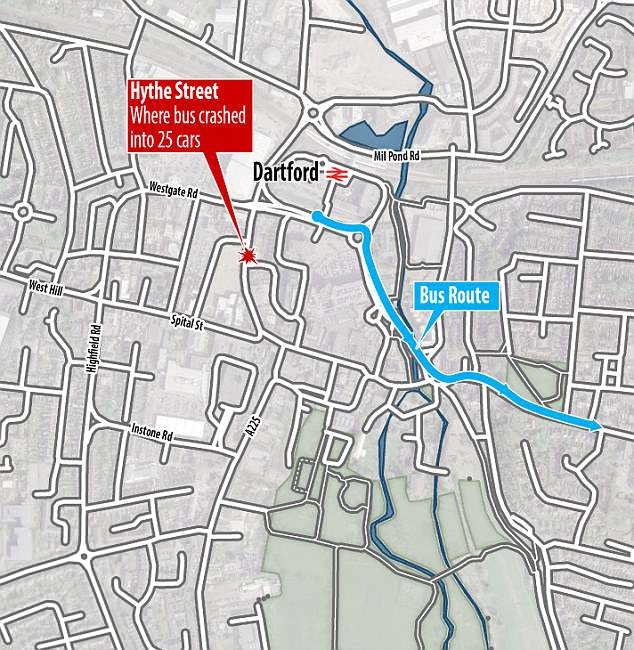 Pictured: Map of where the out-of-control bus smashed into 25 vehicles in Dartford, Kent 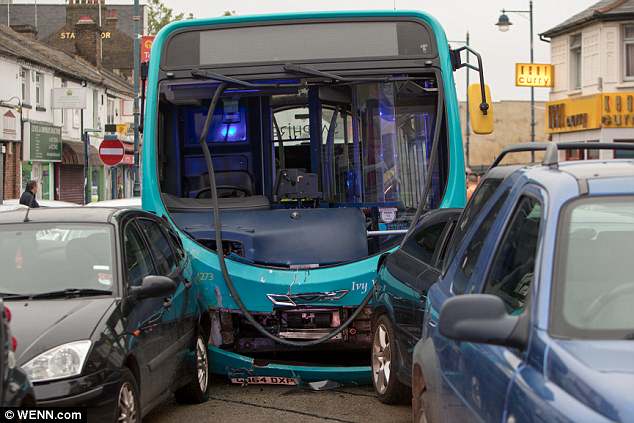 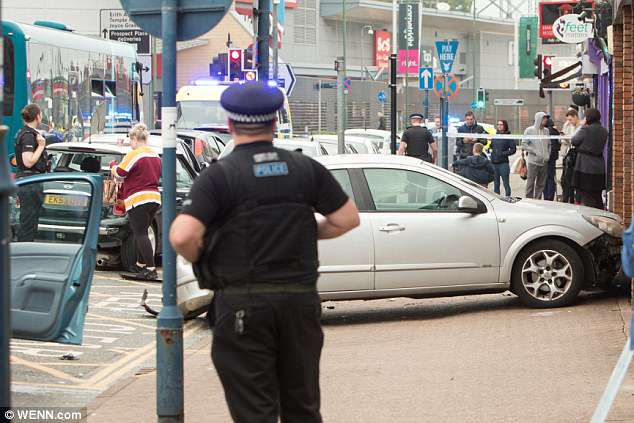 Shopkeepers on the street have been told the driver in question had more than 20 years’ experience as a bus driver.

Shop worker Tharun Thayaparan, 20, raced outside when he heard a loud bang on Tuesday evening.

He said: ‘It was manic. I saw the bus ploughing through cars. It was like dominos.

‘I saw a woman jump out of the boot of the car as both sides were smashed and that was the only way to get out. 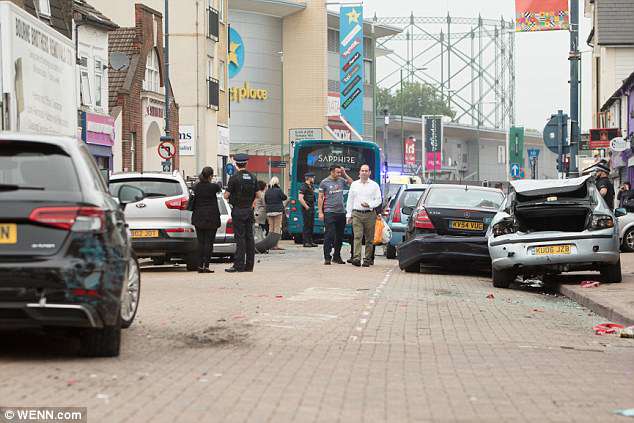 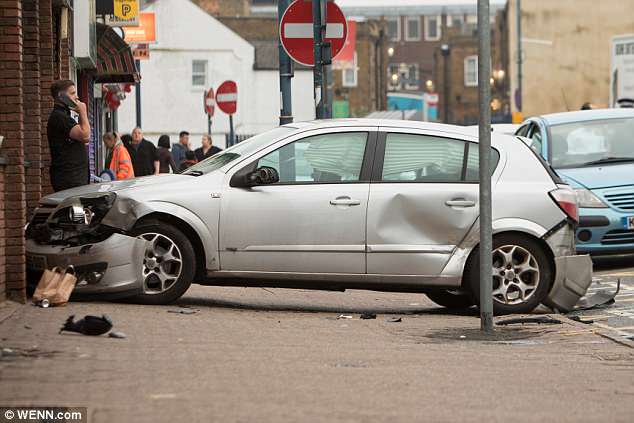 ‘A little girl’s lip was cut open. Everyone was screaming and shouting.

‘The driver was in total shock. The car outside was pushed onto the pavement.

‘I have never seen something like that. People we’re arguing with the driver. Shouting at him, ”Look what you have done. You have hurt people.”’ 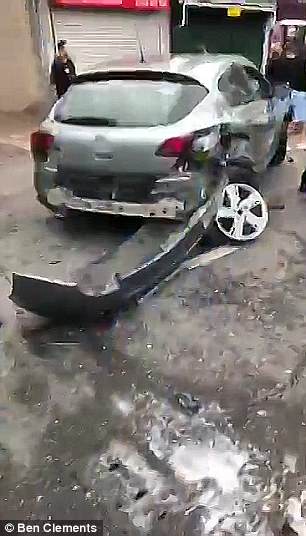 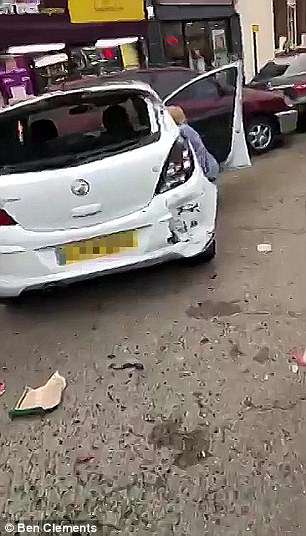 Cafe owner Gokhan Derici, 32, was stunned when he saw a traffic warden slap a parking ticket on a car that was badly damaged in Tuesday evenings pile-up.

A black Audi A3 with its back wheel flattened and ripped open and the bus’s paint scraped along its dented rear remained parked opposite Mr Derici’s caff The Coffee Pot on Wednesday.

He claims he saw a female traffic warden stick the parking ticket on the damaged car at around 7am on Wednesday morning.

He said: ‘I opened up at half six I was outside. I was going to go over to this lady.

‘Before this car there was another car but he moved. Then she came and ticketed this one.

‘I think it is wrong. He didn’t ask for this to happen. He should not get a ticket.

‘You can see his back wheel, he can’t even move.’

Dartford Borough Council confirmed one person had been issued a parking ticket after their car was involved in the crash.

A council spokesman said: ‘It seems that one of our officers properly issued a ticket to a car parked outside a cafe in Hythe St this morning and then ticketed another vehicle close by that was involved in last night’s incident and had not been recovered from the scene.

‘When it became clear that the car was involved in the incident the ticket was cancelled immediately.’

Hairdresser Ramazan Sasmaz, 38, had his Mercedes slightly damaged during the incident.

He said: ‘I was shocked. I saw a big bus running into cars.

‘You think it is a terrorist arrack. It was scary. It was terrible. There were cars on the pavement.

‘My car is scratched but some cars are written off.’

A black Audi parked along Hythe Street on Wednesday still bore the scars from the previous evening, with a flat rear tyre and a large dent in its rear.

Turquoise blue paint from where the bus had struck it was scraped along the car’s rear.

Further along, a maroon Toyota’s bumper hung off and one of its rear wheels had been ripped open by the first of the impact.

The bus reportedly finally came to a standstill near a Salvation Army building just before the traffic lights on Hythe Street.

Several tow trucks reportedly worked late into the night to remove damaged cars from the road.

Takeaway shop manager Mendis Arulappan, 55, saw his Toyota smashed onto the pavement as the bus scythed along Hythe Street.

One car almost ploughed into the Dartford Greek Taverna as it was shunted onto the pavement, he recalled

Mr Arulappan said: ‘I was in the shop last night and a big noise came from outside.

‘There were cars on the pavement. One car had hit the wall of the Greek Taverna.

‘One car had gone inside the Salvation Army church.

‘I was shocked. My car mounted the pavement . People were crying and dizzy.’ 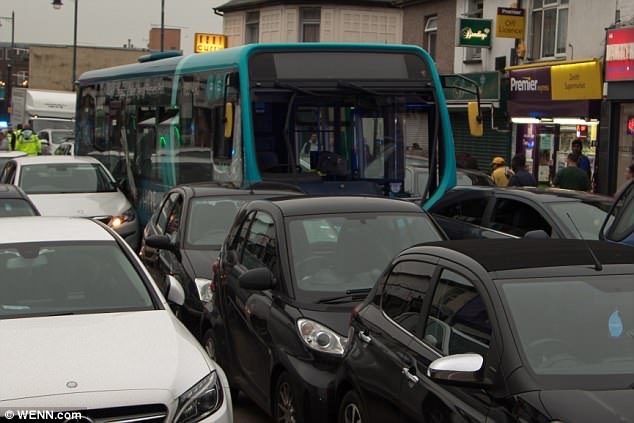 Brian Barnett tweeted: ‘Serious accident in Dartford, my car smashed! About 20 cars involved, hit by bus. My back hurts!’ 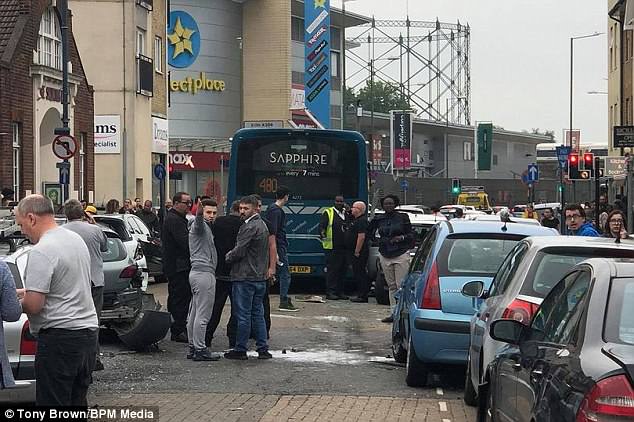 None of the injuries are thought to be serious.

A Kent Fire and Rescue Service spokesman said: ‘We were called, along with other emergency services, to a crash involving a bus and around 25 other vehicles.’

It added that a number of people suffered minor injuries and one person required oxygen following the crash. 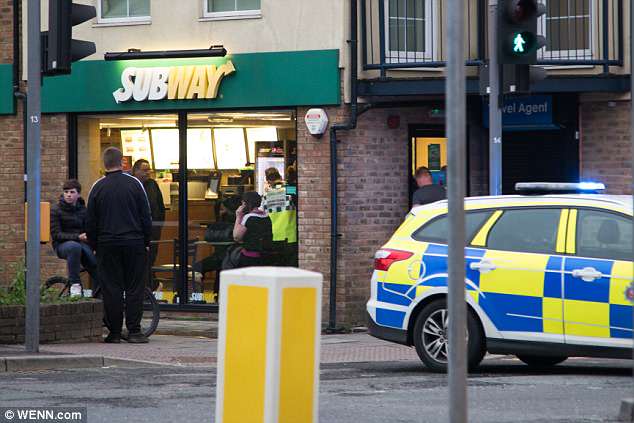 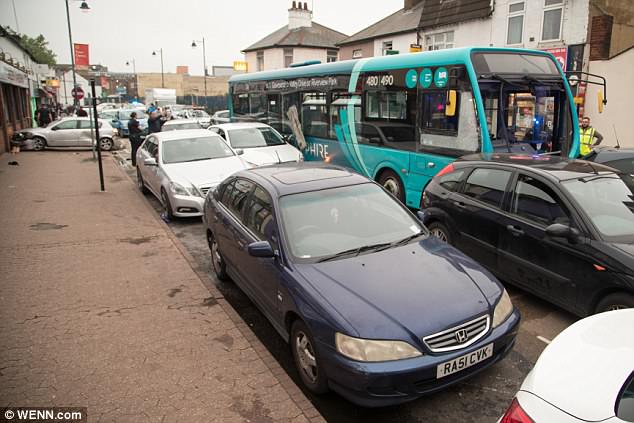 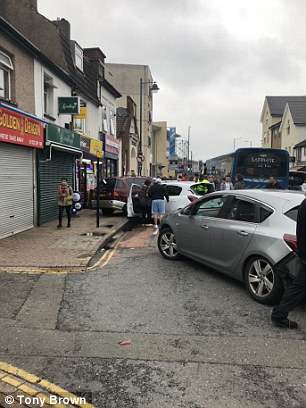 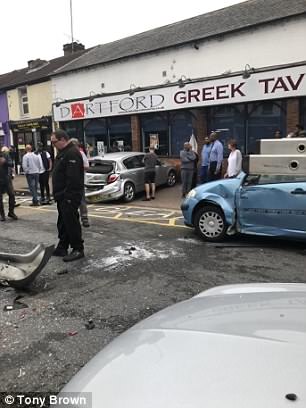