A New Jersey man was shocked when he found a baby crawling along a busy street as he was driving.

Cory M. Cannon, 41, was passing through Lakewood on Saturday around 5pm when he saw the child on all fours, crossing the road completely alone.

At first Cannon, a father to a four-month-old daughter, thought the child was a toy, but when he realized it was a baby he immediately got out of his car to halt traffic.

Cory M. Cannon, 41, snapped a photo of a baby crossing a busy street on Saturday evening

‘I thought it was a toy or something until she moved,’ he said to Asbury Park Press.

‘I knew I needed to get some sort of proof and my GPS was open on my phone, so I used my work vehicle to slow down traffic behind me and took the pic as I was exiting the vehicle and halting oncoming cars,’ he added.

Cannon snapped photos of the shocking scene and posted them to Facebook, where he’s since made them private after the post went viral racking up over 2,000 shares.

‘Parenting at its absolute worst, Joe Parker Rd in Lakewood today. I thought about MyBabyGirl and wanted to whip this dudes a** for being so negligent, some people don’t deserve to have kids,’ he wrote in his post.

Cannon thought the child was a girl but police later confirmed the infant as a boy. 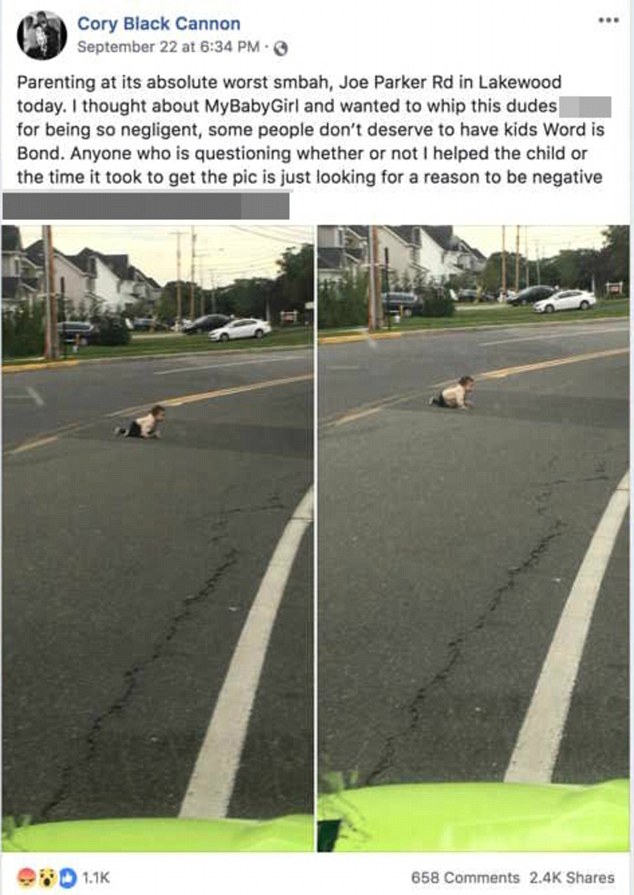 Cannon shared photos of the shocking scene on Facebook, where he’s since made them private after the post went viral racking up over 2,000 shares

As he stopped traffic, a neighbor picked up the baby and brought the child back to his home. It’s not clear how the child ended up on the road or how long he was there for.

At the home, a young child answered the door which was found ajar.

Cannon later called Lakewood police, who said Monday that the infant may have scurried out of the home while the front door was held open by an older sibling.

The family did not realize the baby boy was missing until the neighbor returned him, cops added.

‘Anytime you have a child that’s endangered they get involved to make sure the child is safe,’ he said.