This is the terrifying moment a row of electricity pylons are blown over like dominoes onto a car during a storm.

Motorist Fanida Khaolueng was driving to work as the wind and rain battered the Andaman coast in Krabi, southern Thailand yesterday morning.

Dashcam footage shows how she was travelling cautiously through the bad weather keeping the car at a steady speed to avoid any accidents.

But strong winds suddenly blew over a concrete electricity post which dragged down 11 others, causing the high voltage wires to plunge directly on her vehicle smashing the windscreen.

Fanida miraculously survived and managed to crawl from the wreckage before calling the emergency services.

Fanida said: ‘I thought I was going to die. I just saw the posts falling on my car. I had no time to react. I just screamed and closed my eyes.

‘But I opened them again and I was still alive. I jumped out of the car and ran away as fast as I could because I was afraid of the electricity.’ 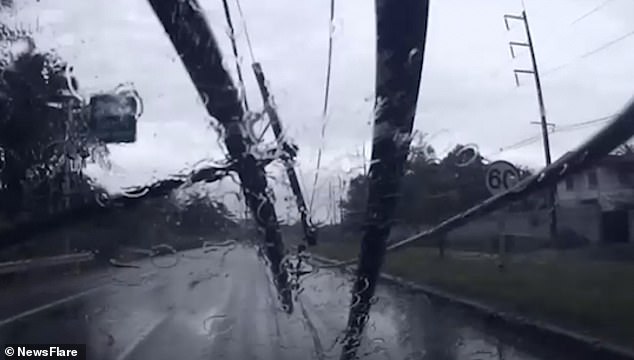 Officials said 12 posts had been blown over in the accident, causing a blackout in the area for hours 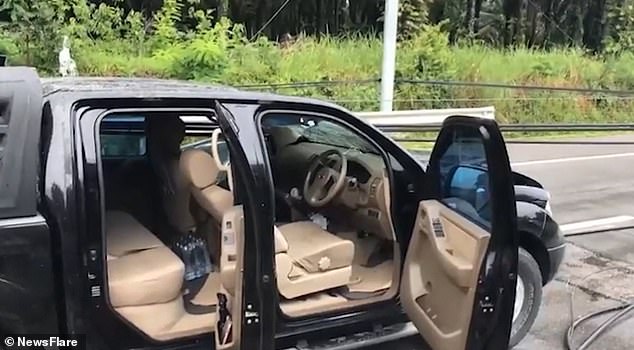 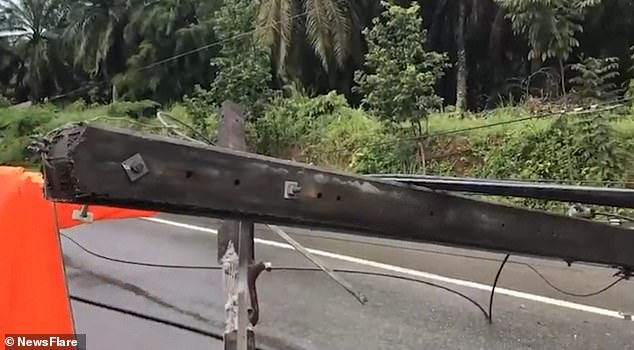 Officials said 12 posts had been blown over in the accident, causing a blackout in the area for hours.

They said that the cables were not severed, which managed to prevent the current passing through to Fanida’s car.

Officers from the Provincial Electricity Authority rushed to the scene and spent the whole day to successfully reinstalling the electricity posts before dark.

Wuttichai Thamsiri, Director of Khlong Thom Provincial Electricity Authority, said that the heavy rain had softened the ground, causing the poles to slide out and fall.

He said: ‘The reason that the electricity poles fell is because of the constant rainstorm.

‘One of them started sliding out and dragged the others down as well because they were all joined together with big cables.

‘We urgently arrived with cranes and lots of equipment and tried to solve the problem as quickly as we could.

‘The authority will also pay compensation to the car owner and residents who were affected by the incident.’