The driver of a high-powered car involved in a crash that left six people dead after losing control at 100mph had cannabis in his system, a coroner has heard.

Birmingham Coroners’ Court heard Kasar Jehangir’s Audi S3, which had two defective tyres, was driven at ‘excessive speed’ causing him to plough sideways into a taxi coming the other way.

The cab driver, father-of-six Imtiaz Mohammed, was killed, along with his passengers, Lucy Davis, a mother-of-two, and her partner, nuclear physicist Lee Jenkins.

Three of the four people in the Audi, including the driver, were thrown from the car, with two ‘ejected through the sunroof’ and the others through the car’s rear.

Kasar Jehangir, pictured, had drugs in his system when he was at the wheel of an Audi involved in a 100mph crash that killed five people including himself 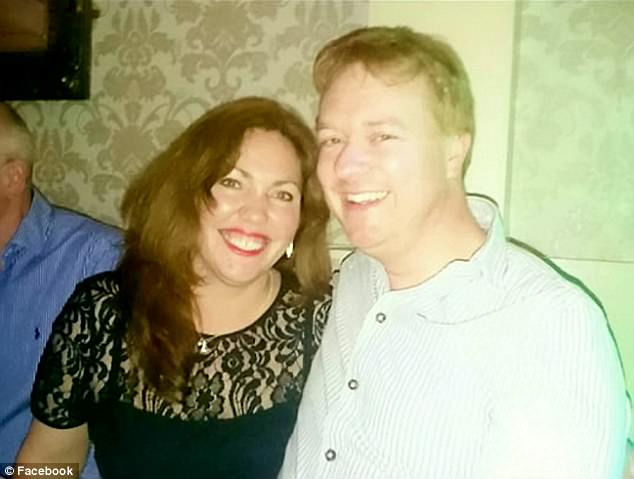 Mother-of-two Lucy Davis, left, and her nuclear physicist partner Lee Jenkins, right, were killed after the the Audi smashed into the taxi they were passengers in 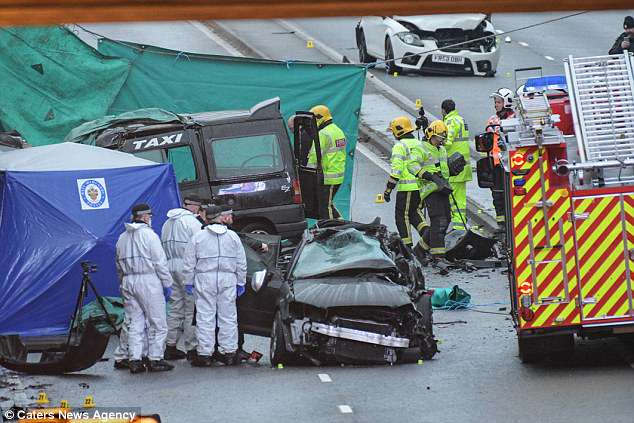 The horror crash saw victims ‘ejected through the sun roof’ as well as thrown through the rear of the Audi, with several sustaining ‘catastrophic brain injuries’

Nobody in the Audi was wearing a seat belt, and there was evidence the occupants had been dealing drugs earlier that night, the inquest heard.

Such was the violence of the crash at about 1.11am on December 17 last year that two of the men were ejected through the sunroof, and two others from the car’s boot.

The driver and passenger of a Toyota Yaris, which was struck by the taxi, miraculously suffered only slight injuries.

Concluding that the taxi’s occupants died as a result of a crash, senior coroner Louise Hunt said: ‘Fundamentally, the cause of the collision was as a result of excessive speed.’

She added: ‘Before the collision occurred, it’s likely the Audi was travelling between 94mph and 100mph in a 40mph limit.

‘It’s unlikely the driver of the taxi or the Toyota could have taken any reasonable action to avoid the collision.’

Post-mortem tests found he was carrying about £1,000 in cash, and had taken cannabis, but could not establish when.

The only survivor from the Audi, Zakkria Khan, 18, told the court he recalled Mr Jehangir had been driving the vehicle.

Mrs Hunt said: ‘On the balance of probabilities, Kasar Jehangir was the driver of the vehicle and that’s based on the fact of his final resting position, consistent with him being in the driving seat.

‘His bank cards were found on the seat, he was insured to drive the vehicle, and Mr Khan indicated that’s where he was.’

After the crash, locals said Mr Jehangir had just been released from jail after admitting driving dangerously and possessing drugs with an intent to supply. 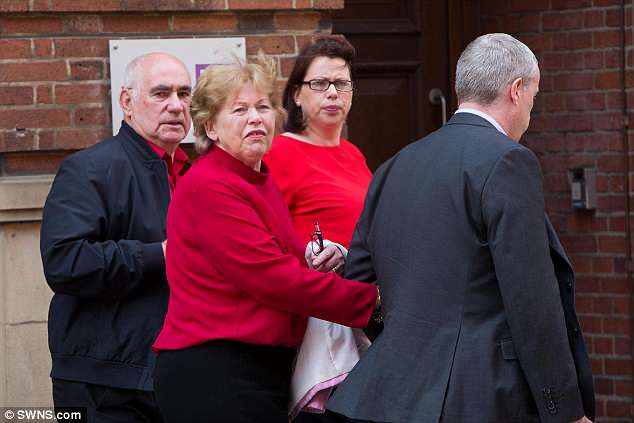 Miss Davis’s family, including her sister Alison Worth, second right, attended the inquest today and demanded to know whether Jehangir and his passengers had been involved in drugs 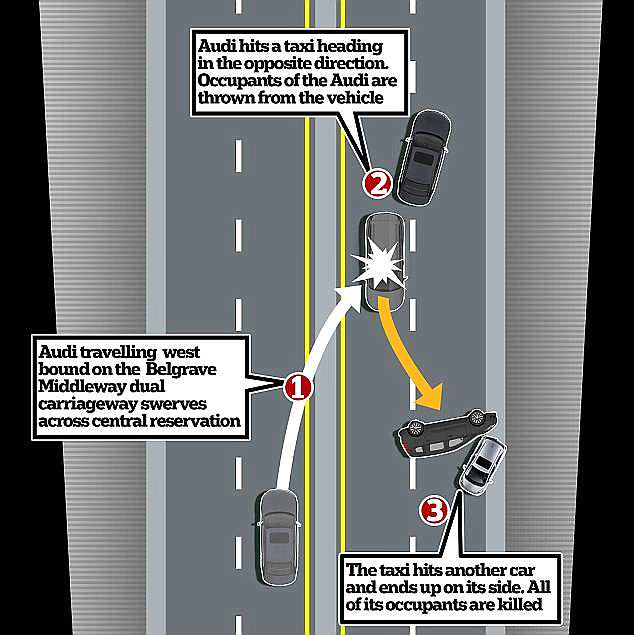 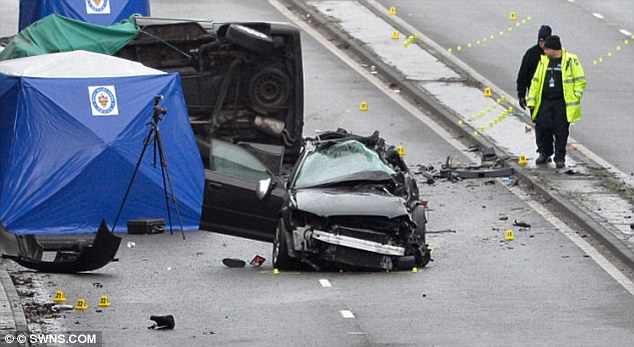 He had been jailed for three years in November 2016 for drugs offences after being caught on camera throwing heroin from the Audi he was driving.

Mr Khan denied that the car’s occupants had been out dealing drugs earlier that evening after cannabis was found in the vehicle, but admitted he had smoked a little.

He said he met with the other men in the car at 10pm, adding: ‘We went out to go see some friends, play snooker, get some food and drive around.

‘I was behind the driver in the car. I don’t remember anything about what happened. I just remember waking up in hospital.’

Mrs Hunt then asked: ‘Did you take any drugs?’

He said: ‘I probably did – cannabis maybe.’

She asked did anyone else take any drugs?

Mr Khan also said he did not remember the car being driven very fast and denied they were involved in any drugs scheme.

Miss Davis’s sister Alison, from Coventry, paid tribute to her sister in a moving Facebook post shortly after her death, writing: ‘They were happy. They were great together and had so many plans. You will always be in my heart and my thoughts. I miss you so much.’

Alison Worth, the sister of Miss Davis, from Kingstanding, Birmingham, read out a statement on behalf of the family.

She said: ‘She was a fun, loving, adventurous mom who was passionate about sign language.

‘She loved to travel and went to many fabulous places around the world. She lived life to the full.’

She also read heartbreaking words from her daughter, which added: ‘My mom was as important to me as air.

‘My heart is broken and I will be scarred for life. A wonderful mother like my mom shouldn’t be taken so soon. I will make her proud.’

A statement read on behalf of the family of Mr Jenkins, who lived in Harborne, Birmingham, said: ‘He grew up in Redditch and excelled at football.

‘He was an incredibly good footballer.

‘He studied physics at Bristol University and his great passion was music. He was a clinical scientist by day and rock and roll star by night.

‘He was a great leader. In between working he loved travel. Always coming back from holiday or planning one.

‘His love of adventure take him on many cycling, camping and waking trips. It was fitting he would find love with Lucy.

‘They shared the same interests and took every opportunity to go out and enjoy adventures together.’

A statement by the sister of Mr Mohammed, from Small Heath, Birmingham, was read out by the coroner.

She said: ‘He had big ambitions and dreams with a whole life ahead of him.

‘He was very comical. We were best friends. He had loads of friends, talkative, cheerful character he was.

He had banter, curiosity and joy.

‘When he would get the chance he would visit his mates for a catch up. Imtiaz married in 2001 and became a very different person.

‘He had lots of jobs before he became a self employed black taxi driver.

‘He would always go the extra mile for those passengers who loved him.

‘His death has come as a great shock to us all.

‘His youngest daughter turned four not 24 hours before he passed away.

‘Words cannot describe the pain we are going through. Our house is empty.

‘He was a legend and was was working hard on that night to support his family.’

Speaking outside court, Mr Jenkins’ mum Ann Jenkins called for a change in the law for serious driving offences. 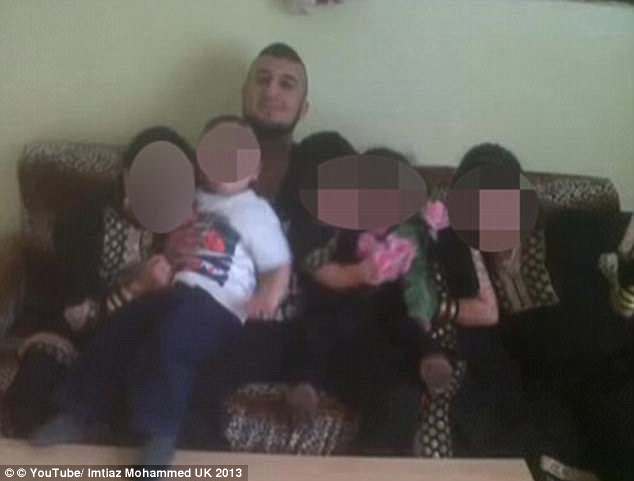 Taxi driver and father-of-six Imtiaz Mohammed, pictured with his family, was killed in the crash and also had drugs in his system, although the coroner was told it would have had no effect on the incident 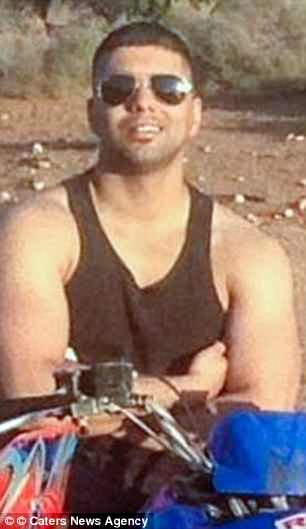 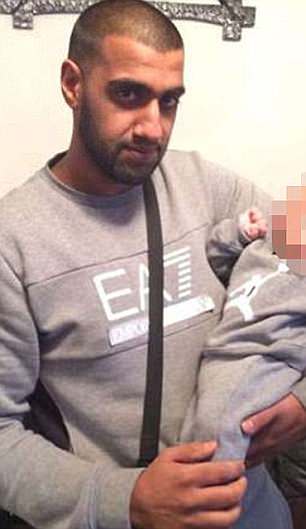 Audi passengers Tauqeer Hussain, left, and Mohammed Fahsa, right, were both in the Audi and both were killed in the crash

She said: ‘The owner of the car had been in prison for speeding at 130mph but he had just come out of prison released early.

‘If only he had stayed in prison for his full sentence Lee and Lucy would be alive today.

‘Every day is a struggle to live with the pain that will be with us for the rest of our lives.

‘We need to see a change in the sentencing from these horrific incidents. At the present time the most that can be given for these crimes is 14 years max.

‘If they plead guilty the sentence is reduced by half to seven years but then they can appeal and most likely they will be released after three-and-a-half years to speed and kill again.

‘I would love to know from above why the law is protecting these killers and innocent families have a life sentence of grief.

‘We need the law to change. I would like to see anybody speeding at 100mph or using drugs and they kill someone – it needs to be a life sentence.

‘Also speeding at 100mph needs to be a ban for life and it needs to mean life.

‘They were still speeding when the tragedy happened. Speed cameras and barrier need to be erected.

‘I don’t want police to have to inform other parents that their child is dead.

‘The driver of the car, his name was Kasar Jehangir and the survivor was Zakkria Khan and they both had cannabis in their system – that’s all I’ve got to say.’ 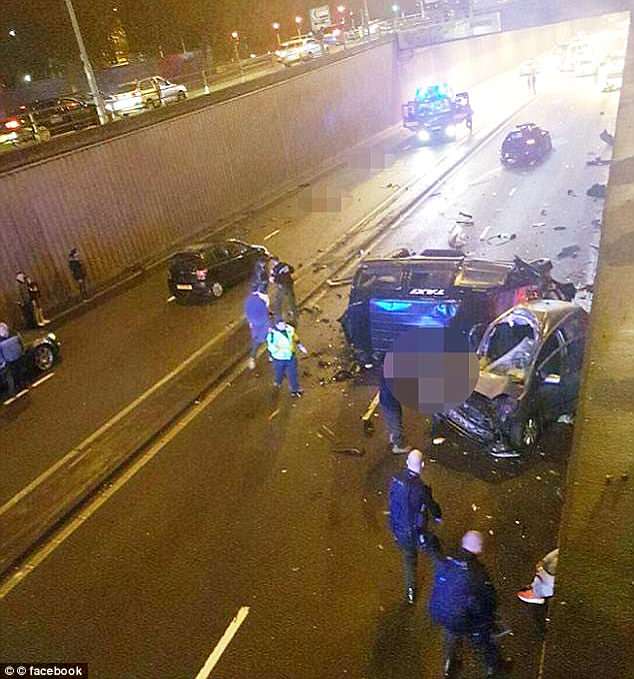 The inquest heard how Jehangir lost control of the vehicle, which crashed through the central reservation before hitting the taxi

However, Sergeant Alan Hands, of West Midlands Police, said: ‘Based on the movements of the vehicle, intelligence surrounding this vehicle and the occupants, it would be a reasonable grounds to suspect they were in the area, dealing drugs from that car.’

‘I would have stopped that vehicle, had I come across it,’ he added.

A police collision investigator found tyre scuff marks where the driver lost control, before ‘rotating’ sideways across the raised kerb of the central reservation on Lee Bank Middleway, Birmingham.

Sergeant Adam Green said the Audi went into the taxi at 87mph, adding: ‘It is clear the driver attempted to negotiate the bend in excess of the maximum speed.’

Mr Mohammed and Ms Davis were pronounced dead at the scene, and Mr Jenkins died a short time later after being taken to hospital.

The other men in the Audi, Tauqeer Hussain, 26, and 30-year-old Mohammed Fahsha, also died at the scene.

Mr Mohammed was not wearing his seat belt, though not a legal requirement for cabbies – neither would it have made a difference, such was the impact’s force.

He and his passengers, Mr Jenkins, 42, and Ms Davis, 43, who were both wearing lap belts, all died from multiple injuries

In a statement from Mr Jenkins’ family read to the court, they said: ‘It is perhaps fitting Lee would find love with Lucy – someone equally positive, full of life and who shared a love of doing things.’

Work colleagues at the city’s Queen Elizabeth Hospital, where he was a clinical scientist, described him as ‘such a top-class bloke’.

Ms Davis’s daughter, in a statement, said: ‘She didn’t deserve to be taken so soon, and should have been able to live with me, my younger brother and Lee.

‘Her adventure will live on and I will make her proud.’ 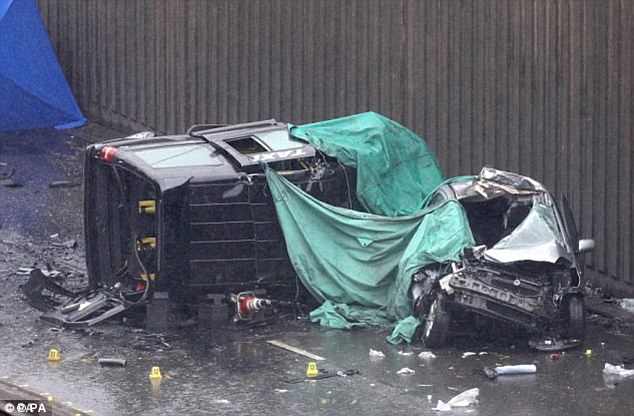 No one in the Audi was wearing suit belts while the driver of the taxi was not either, the inquest heard 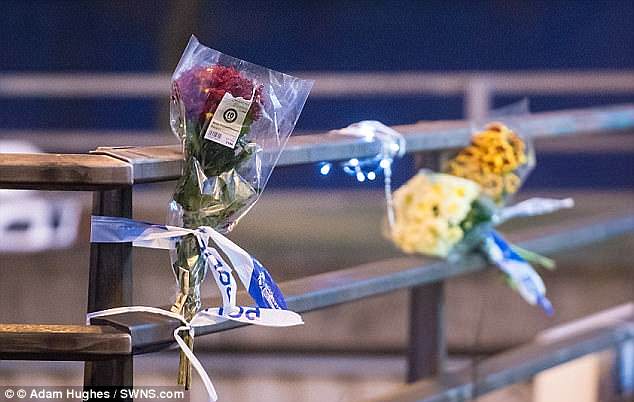 Tributes have been left near the scene of the crash, pictured, in memory of the victims

Mr Mohammed’s family said: ‘He was a legend. On that night he was working hard to make a living, and provide for his family, just like everyone else.’

The Belgrave Middleway, where the accident happened, has a 40mph speed limit and is covered by speed cameras at each end. But one camera, near a McDonald’s, is said to be inoperative.

Speaking at the time, a resident who lives nearby said: ‘The road is used as a racetrack by younger drivers.

‘People know that the camera on the McDonald’s side of the road does not work so they go at whatever speed they like. It’s common to see cars racing each other along here.’

Another onlooker, who filmed the aftermath of the carnage on his mobile phone, said: ‘That stretch of road is known for being used by lads racing their cars.

Inquests into the death’s of the Audi’s occupants are due to take place on Wednesday.