Driver is jailed for 24 weeks after running over and killing great-grandfather, 73

Driver is jailed for 24 weeks after running over and killing great-grandfather, 73, who was delivering birthday card to one of his grandchildren

A driver has been jailed for six months after running over and killing a great-grandfather who was delivering a birthday card to one of his grandchildren.

Zac Baker, 23, had gone home from work for lunch when he knocked over Steve Phillips, 73, as the ‘beloved grampy’ stood next to his car on a street in Swansea.

Mr Phillips was visiting his granddaughter Hannah at her home in the Treboeth area of the city to drop off the card on July 23 last year at about 2pm. 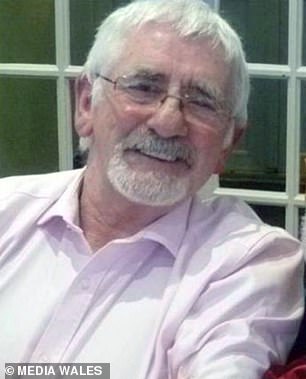 Zac Baker (left), 23, had popped home for lunch from work when he knocked over Steve Phillips (right), 73, as the ‘beloved grampy’ stood next to his car on a street in Swansea

Baker reversed out of the drive of his house and pulled off, returning to work – before his Renault Clio collided with Mr Phillips’s car and knocked over the pensioner.

Swansea Crown Court heard Mr Phillips’ granddaughter was just yards away from the crash, but had looked down to pick up her daughter seconds before the impact.

Relatives and neighbours ran to help Mr Phillips, and a car jack was used to lift Baker’s Clio. However, he had suffered ‘catastrophic’ injuries and could not be saved.

The court heard a ‘shocked’ Baker remained at the scene, repeatedly telling people in the street ‘I’m sorry I didn’t see him’.

When police arrived he was said to be ‘visibly upset’, and in his subsequent interview said he remembered feeling a bump and the car ‘jerking’ to the left.

Mr Phillips, who was a grandfather of six and great-grandfather of one, was described by his family as a loving husband and father and a ‘beloved grampy’. 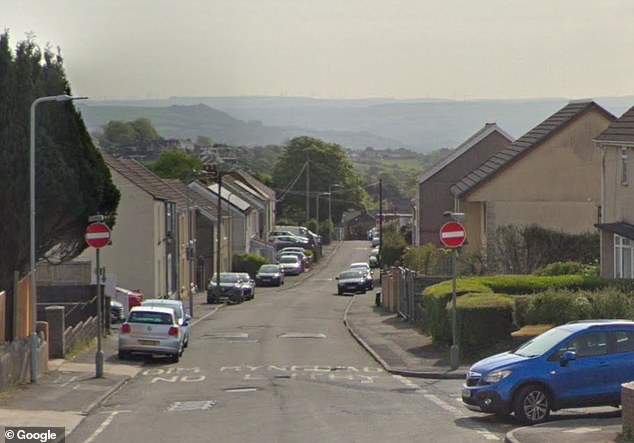 Baker reversed out of his drive on this road (above) in Swansea and pulled off, returning to work – before his Clio collided with Mr Phillips’s car and knocked over the pensioner

Stephen Rees, prosecuting, told the court crash investigators later concluded Baker must have clipped the kerb on the right-hand side of the narrow one-way street.

He would have then swerved to the left and hit Mr Phillips’ car and then Mr Phillips.

Baker had previously pleaded guilty to causing death by careless driving when he appeared in the dock for sentencing. He has no previous convictions.

Mr Phillips’s son, Nicholas, said the death had had a huge impact on everyone in the family, leaving them with feelings of ‘enormous sadness, anxiety, malice and hate’.

He said: ‘Emotionally the family feels broken from young to old – we are all now different people.’

Turning to his mother, he said his parents had worked hard all their lives so they could spend their latter years together.

He added that she ‘misses the big things as well as the little things – the goodnight kisses and morning cuppas they shared for 50 years’.

He said the death of Mr Phillips had left an ‘indelible mark’ on the family, and having to go through the court process had felt like a ‘taint’ on his father’s memory.

John Hipkin, for Baker, said his client was ‘truly remorseful’. He said Baker had been brought up in a Christian family, and would have to live with the knowledge he was responsible for taking another person’s life for as long as he lived.

Judge Keith Thomas said it was difficult to fully understand what had happened on the day in question but it was clear Baker’s lack of attention behind the wheel had led to devastating consequences.

He said no sentence a court could ever impose could reconcile a family to its loss, nor ease its pain, and such cases were difficult to sentence.

Judge Thomas said the Sentencing Council provided guidelines to ensure consistency of sentencing but often the families of victims were left with a feeling of ‘injustice’ at the outcome.

Giving the defendant a one-third discount for his guilty plea he sentenced him to 24 weeks in prison.

Baker will serve half that period in custody before being released on licence to serve the remainder in the community. He was also banned from driving for two years.