Rebecca Evans, 27, a charity worker, was eight months pregnant when she died in the crash on the M4

A heavily pregnant mother and her unborn daughter were killed when a BMW driver who finished making a hands-free call only seconds earlier ploughed into her car in a traffic queue, a court heard yesterday.

Rebecca Evans, 27, a charity worker, was eight months pregnant when she died in the crash on the M4.

He did not brake before the collision after failing to notice other drivers had slowed.

Miss Evans was in the passenger seat of a Peugeot 407 driven by her partner Alex Evans when Scott hit the back of the stationary car at around 70mph.

The court heard Mr Evans was in the outside lane of the M4 at Port Talbot, South Wales, when he saw cars in front slowing.

He came to a halt and put on his hazard lights before noticing the BMW looming in his mirror.

In a statement read to Swansea Crown Court, Mr Evans added: ‘Becca was looking down at her phone totally oblivious to what was going on.

He described an ‘almighty bang’ and said the scene was chaos. Witnesses rushed to help.

Mr Evans said: ‘I saw them pull Becca from the car and I saw the blood on her dress. I knew then that our daughter had gone.

‘I knew that straight away. Not in a million years did I think I would lose Becca.’ Mr Evans said: ‘I screamed and cried for them both.’ 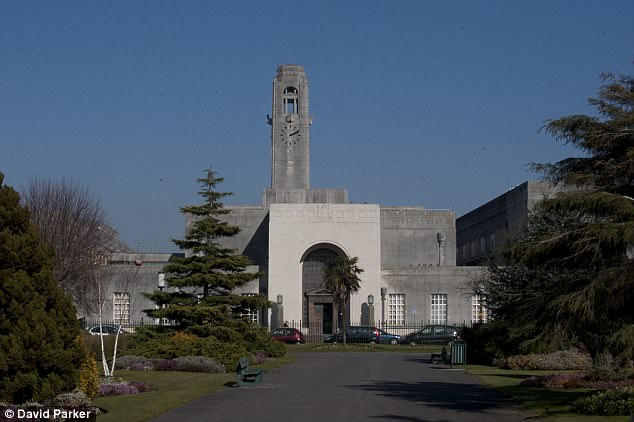 Swansea Crown Court, where businessman Craig Scott, 51, is on trial

Cian was flown to hospital where he was found to have bleeding between his brain and skull and a depressed skull fracture. Both his legs were broken.

Miss Evans died on the morning commute weeks before she was due to go on maternity leave from her job at housing charity Shelter.

Mr Evans also worked at Shelter and the couple, who lived in Bridgend, were due to drop Cian, who was in the back of the car, with Miss Evans’ mother, Meryl, on their way to work.

Scott told police he had been distracted by something on a motorway bridge just before the crash, and ended a hands-free call with work about five minutes before.

But phone data showed the call was actually between 14 and 34 seconds before the tragedy.

A driver who saw the crash in November 2016, Matthew Sutton, said visibility was excellent.

He said: ‘The silver car was completely mangled and I couldn’t see who was inside it.’

The court heard there was no evidence that the BMW brakes had been applied suddenly.