Driver parked outside fire station tells firefighters to ‘f*** off’

Firefighter who were on high alert this weekend due to the resurgence of the ‘Beast from the East’ were told to ‘f*** off’ by a motorist parked in their driveway when they politely asked him to move.

Despite the safety concern that the man was causing by blocking the area emergency exit, he refused to move away from the Kings Norton fire station, in Birmingham, while he ate his breakfast.

The team tweeted an image of the car parked in the heavy snow with the caption ‘This car has been left on our station cobbles, when asked to move he has told us to F$*£ off whilst he got his breakfast from the cafe opposite, some people have no consideration. ‘Stay safe out there!’

‘This car has been left on our station cobbles, when asked to move he has told us to F$*£ off whilst he got his breakfast from the cafe opposite’ the fire brigade tweeted

Nearby Cricklade Fire Station responded by posting their own photo of a driver parked over ‘keep clear’ lines outside their station.

Last week, a stubborn parent on the school run refused to move their Mercedes at pick-up time – even though they had parked it in front of a fire station.

Firefighters asked the parent to move their car from outside Cricklade Fire Station in Wiltshire.

But the driver refused to budge, claiming they were not an obstruction.

Kings Norton replied to their nearby colleagues saying: ‘It’s frustrating as they have no consideration for others, just themselves.’

Glynis CJ tweeted: ‘Selfish & probably the first to complain if you were delayed when he needed help.’

Others called it: ‘Unbelievable selfishness’ and some said ‘hopefully they will be visiting the drivers home’. 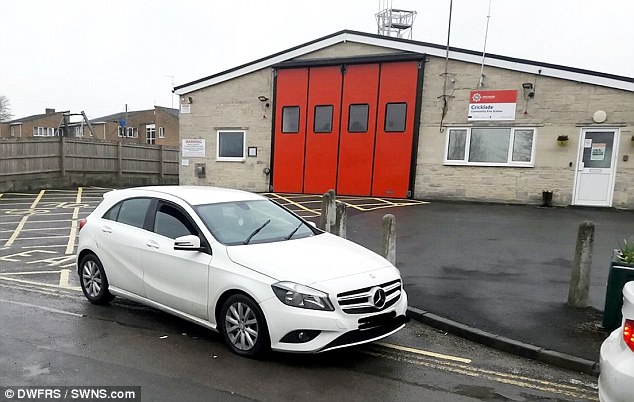 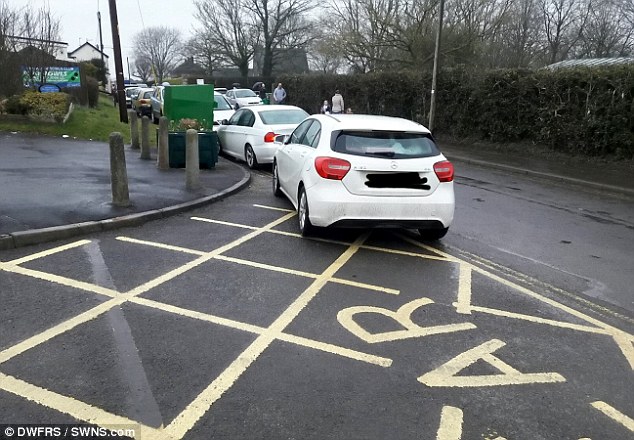 The brigade later tweeted that crews were going out in the city to do safety checks on vulnerable members of the community as snowfall swooped the country.

It comes as the latest in a string of reports of abuse being hailed at emergency service staff.

In February, a retired engineer blasted his ‘nightmare’ neighbour after she was fined just £120 for telling paramedics to ‘move your f**king van’.

Kirsty Sharman admitted a public order offence over leaving a foul note on when a crew that had been responding to a 999 call from her next-door neighbour in Stoke-on-Trent. She wrote ‘I couldn’t give a s*** if the whole street collapses. Now move your van from outside my house.’

In November, a teaching assistant left a moaning note on an ambulance telling it not to ‘block his driveway’ while paramedics treated a patient who later died.

Last week, a paramedic who returned to his ambulance outside a hospital found an angry note pinned to his windscreen from a consultant whose illegally-parked car had been blocked in.