A driver has called out a group of ‘idiot’ cyclists for overtaking him on a winding bend on a dangerous stretch of road.

Alex Smith captured the nerve-wracking dashcam footage along Greenhill Road in the Adelaide Hills, South Australia on the weekend.

‘Cyclists complain about cars all the time, but then they are seen doing this sort of s**t,’ he said.

The group of cyclists could be seen overtaking Mr Smith and another car along the double lined road on a blind corner.

Adelaide Hills locals are fed up of dealing with near-misses caused by cyclists riding dangerously.

‘We are sick of cyclists not being held accountable and not following the laws,’ Bauer told Seven News.

Others took to social media to slam the cyclists for their irresponsibility.

‘Such disregard for an oncoming driver of a car if he hit one,’ one man said.

‘And cyclists wonder why motorists have no respect for them. Perfect example right here,’ said another.

‘All cyclists should have to register their bikes and have a number plate on their bikes so the motorists can dob them in,’ one person suggested.

‘I’m sure he is a motor vehicle owner and if I saw him I would personally ask him, ‘How would you like it if you, as a driver, nearly missed or hit a cyclist and had them through your windscreen?’ 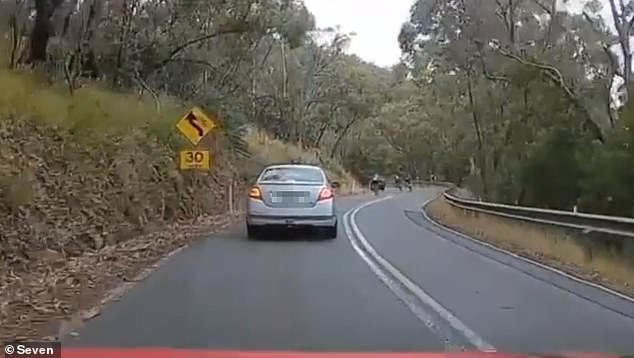 Alex Smith captured nerve-wracking dashcam footage along Greenhill Road, in the Adelaide Hills, on the weekend. Pictured: cyclists can be seen in the distance overtaking on a blind corner