Instant karma: The bizarre way this car began by ‘speeding away from police’ and ended up embedded in a stack of crates ten metres off the ground

A driver allegedly speeding away from police slammed into a railway line and catapulted, landing ten metres off the ground in a stack of orchard crates.

A driver speeding away from police in Hastings, in New Zealand’s Hawke’s Bay region, hit a a railway line and became airborne before landing into a stack of orchard crates (pictured)

New Zealand police said officers spotted the car driving at speed on the wrong side of Karamu Rd, in Hastings, on Sunday night and tried to pull it over.

But the driver failed to stop, instead fleeing down Kenilworth Road, Mayfair, where the car hit a patch of gravel at the base of the railway lines and became ‘airborne’, police said, the NZ Herald reports.

A police spokeswoman said the car launched metres into the air, over a fence, and crashed into the stack of fruit boxes about 12.30am.

Emergency services were called to the crash site where they worked into the early hours of the morning to extract the driver.

‘Our crews assisted with the extrication of the occupant,’ a Fire and Emergency New Zealand spokesman said.

The man, aged in his 20s, was rushed to Hawke’s Bay Hospital with serious injuries. He is now in a stable condition.

Footage posted online shows firefighters ascending ladders to reach the car as its rear protruded from the pile of crates.

The front half of the vehicle was completely crushed under the weight of the containers, and was still visibly lodged inside the stack later on Sunday.

Police said officers were not pursuing at the time of the crash.

Local resident Kristy Hall said she was watching TV when she heard a car racing down her street.

‘I immediately thought that he was going way too fast to stop and jumped up out of bed,’ she said.

‘Before my feet hit the floor, there was a half second skid and then the bang.

‘My initial thoughts were filled with fear that they would be pulling a body from that car.’

Investigations into the circumstances surrounding the crash continue. 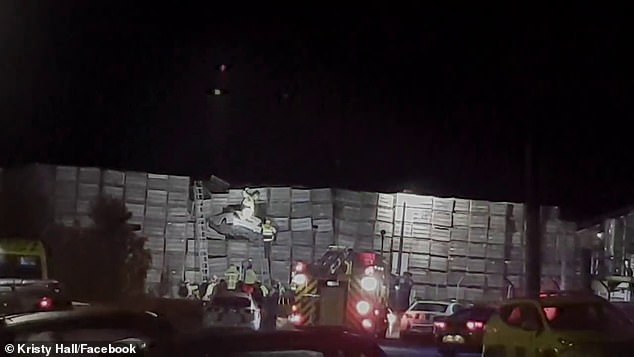 Emergency crews were called to Kenilworth Road, Mayfair, about 12.30pm Sunday to reports of a single-vehicle crash, where they worked in the early morning hours to extract the driver