A truck driver miraculously survived this horror crash which saw his truck roll and dangle precariously off the edge of a freeway ramp.

The man, aged in his 50s, was taken to hospital with soft tissue injuries, an Ambulance Victoria spokeswoman told 9News.com.au.

VicTraffic warned Melbourne motorists that the Calder Freeway had been closed inbound after the truck rolled over near Green Gully Road, Keilor, in Melbourne’s north west.

The contents of the truck had spilled across multiple lanes of freeway.

Traffic remained heavy for much of the evening after the incident, which happened at around 5pm.

It is understood that the clean-up will take much of the night.

Motorists were being warned to expect significant delays in the Keilor area. 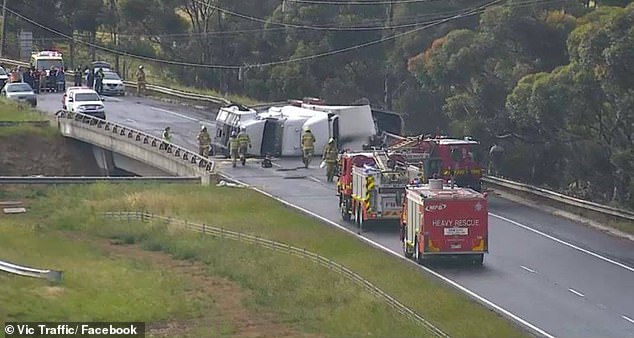 Melbourne motorists have been warned that the Calder Freeway has been closed inbound after the truck rolled over near Green Gully Road, Keilor, in Melbourne’s north west