A careless driver who killed the mother of Olympic cyclist Chris Boardman has been jailed for 30 weeks.

Rosney run her over at a mini-roundabout after the grandmother had fallen from her bicycle moments before.

Rosney was driving a Mitsubishi pick-up truck and had taken three calls on his mobile, which was on loudspeaker, in the minutes before the crash in Connah’s Quay, North Wales.

The final call, which was made to his wife, was made four seconds before the collision, the court heard.

Mr Boardman described the death as ‘horrifically life-changing’, and called for more driving bans to deter motorists breaking the law.

He was initially due to stand trial charged with causing death by dangerous driving, but pleaded guilty to the less serious charge in December.

Judge Rhys Rowlands sentenced Rosney to 30 weeks in prison and disqualified him from driving for 18 and a half months at Mold Crown Court.

Rosney and his wife Victoria, who he had been speaking to on the phone before the collision, had both originally been charged with perverting the course of justice after allegedly deleting call logs.

However, the charges were dropped halfway through a trial in July and the jury was discharged.

During the original trial, the court heard his father Peter Rosney, a retired detective constable, had tried to stop officers from questioning Mrs Rosney about the crash while she was at work. 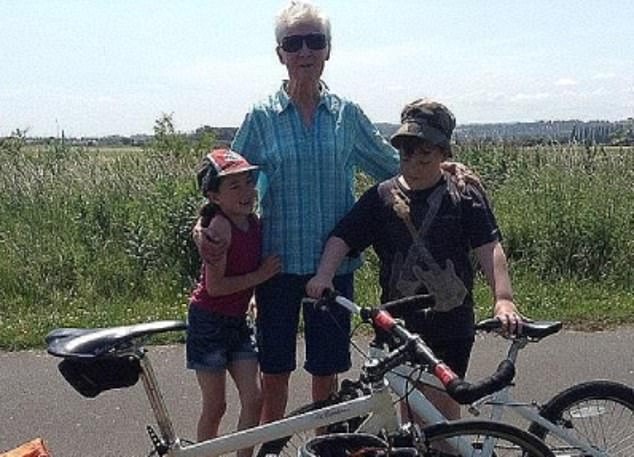 Carol Boardman (pictured, with her grandchildren) was on her bike when she was involved in the collision in Connah’s Quay, North Wales, on July 16, 2016

The judge said: ‘This was an accident which could have easily been prevented and your contribution to that accident is significant in as much as you were distracted, the distraction being as a result of you using your mobile phone before the actual collision.

‘Any accident which results in someone losing their life is the most appalling tragedy, the more so when the deceased, as here, was well loved and, as I have indicated already, a pretty remarkable woman.’

Mrs Boardman, 75, whose cyclist son Chris won gold at the 1992 Olympics, suffered multiple injuries when she was hit by Rosney’s Mitsubishi pick-up truck after falling from her bike on a mini-roundabout in Connah’s Quay, North Wales, on July 16 2016.

The court heard that in the minutes before Rosney hit Mrs Boardman, who had fallen from her bike on the junction of Mold Road and Ffordd Llanarth, he made or received three phone calls while driving his vehicle, which did not have a hands-free facility.

Matthew Curtis, prosecuting, said: ‘It’s clear he was speaking to his wife on the telephone four seconds before the fatal collision and he was, we submit, still distracted by the telephone call and mobile telephone handset.’

Oliver Jarvis, defending, said Rosney did not ‘want to make any excuses for his behaviour’. 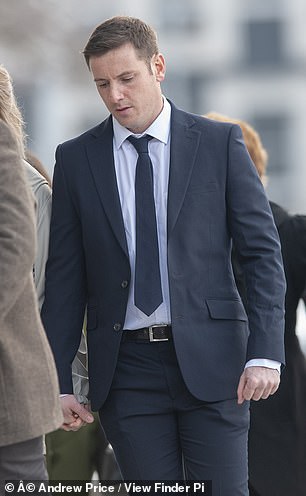 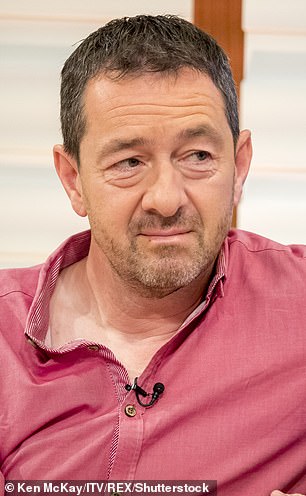 Rosney (left) was driving a Mitsubishi pick-up truck and had taken three calls on his mobile, which was on loudspeaker, before the crash that killed the mother of Chris Boardman (right)

He told the court: ‘He says that he has destroyed the lives of two families and therefore nothing I say will seek to undermine that guilty plea.’

But he said the father-of-two, who had a clean licence before the crash, was driving at an appropriate speed and if Mrs Boardman had not fallen from her bike he would not have hit her.

He added: ‘Mrs Boardman entered the bend over the give way lines when the defendant had priority and was already on the roundabout.’

In a statement, Mrs Boardman’s brother David Linfield said she had been a keen cyclist since the age of 16 and ran road awareness courses for young cyclists.

Reading the statement, Mr Curtis said: ‘The deceased finished work in order to bring up her children. She continued cycling through her life and encouraged her children to do the same.’

Speaking ahead of the sentencing, Mr Boardman said: ‘Somebody being careless takes somebody’s life and it’s treated as just that – carelessness.

‘Somebody who takes me swimming in the sea as a kid and races me for signs on a bike and has grandchildren is just taken away because somebody’s careless, because they used a mobile phone.

‘I’m pretty certain that the death of my mother, which has been horrifically life-changing among all of our family, won’t be enough to change that.’

Rosney, of Welland Drive in Connah’s Quay, had originally faced trial in July last year but the jury was discharged halfway through.

He and wife Victoria Rosney, 32, were both initially charged with doing an act tending or intending to pervert the course of justice by deleting call logs from their phones, but the jury in the first trial was directed to return not guilty verdicts after Judge Rowlands said they could not fairly convict them.