The parking fines you DON’T have to pay: Thousands of drivers are told to ignore penalty notices handed out by private companies

Drivers are being told not to pay parking tickets in more than 500 car parks across the country because they’re not enforceable – and the private company that owns them can’t track you down.

Parking Enforcement Services (PES), a division of Wilson Parking Australia, owns 300 car parks across Australia and employs  officers to issue $65 fines to anyone who fails to display a ticket, 9 News reported.

Care Park owns about 270 car parks across the nation and has a similar process, along with Ace Parking.

Thousands of drivers have reportedly paid the penalty, but experts said the notice isn’t a real fine and doesn’t need to be paid.

A PES spokesperson told the publication it only charges customers who don’t adhere to the entry terms.

‘Customers who do not adhere to the conditions of entry are issued with breach notices. Such notices are legally enforceable in Australian Courts under laws relating to contract and informed consent,’ it said.

But the fine print on the back of the infringement notices reads: ‘This is not a fine. 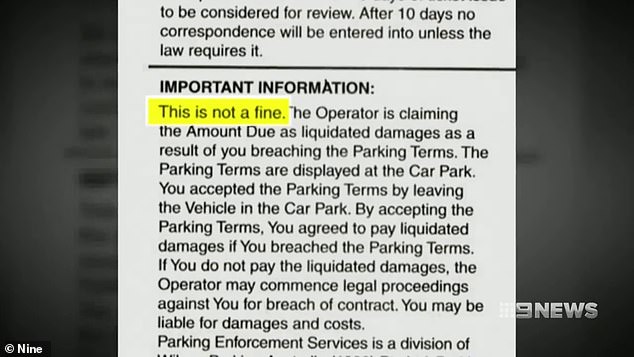 But the fine print on the back of the infringement notices says: ‘This is not a fine’

Without access to private records, the company can’t find the driver unless they appeal the fine through the website.

Barrister Sean Hardy, who said the notices are a form of bullying, urged drivers to simply ignore the notices.

‘It’s a business model that is aimed at the ignorance of people to pay up a relatively small amount of money to avoid the hassle of engaging in a fight with an entity that’s much stronger than they are and so it’s just a bullying tactic.’

He also said the invitation to appeal provides the company with your details – so they can then can sue. 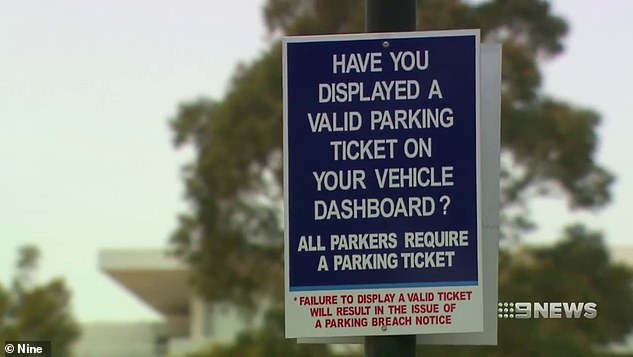 PES said parking fines make up a small percentage of their annual revenue.

On it’s website, PES said it prefers to charge people rather than towing and wheel-clamping because such ‘aggressive’ measures don’t allow the driver to appeal.

‘PES takes the direct confrontation out of policing car parks as it is essentially breach notice issuing,’ it reads.

‘The notices are not a ﬁne, but a breach of contract fee to cover the cost of enforcing the terms and conditions of parking and recovering the breach fee.’