A trip to the McDonald’s drive thru could land an unsuspecting driver with a £200 fine if they use Apple Pay while their engine is running.

The punishment for using a mobile phone behind the wheel has doubled from three points and a £100 fine to six points and a £200 fine.

The new law, enforced on March 1, means those using their phones even for Apple Pay at a McDonald’s Drive thru could face harsh sanctions.

The rise in the number of penalty points means newly qualified drivers immediately lose their licence as their points allowance is capped at six for the first two years.

And despite a misconception that McDonald’s is on private property drivers can still be fined, according to Greater Manchester Police.

While responding to questions on the force’s Traffic Twitter page they said if a car’s handbrake is on and Apple Pay is used a fine can be issued.

When Jay Chase asked police whether customers can escape a fine while using Apple Pay at a McDonald’s drive thru they said: ‘If your engine is off and your handbrake applied and you’re parked yes. If your engine is on no.’

The change came after a Government consultation decided to make the punishment for cars and HGV drivers the same.

A consultation document reads: ‘Research shows that mobile phones can be a considerable distraction to drivers.

‘One study by the Transport Research Laboratory (TRL) found the use of a mobile device impairs driving by a greater degree than if the driver were above the drink driving limit.’

And while before the change first time offenders could attend a training course to avoid the fine and points, this is no longer an option. 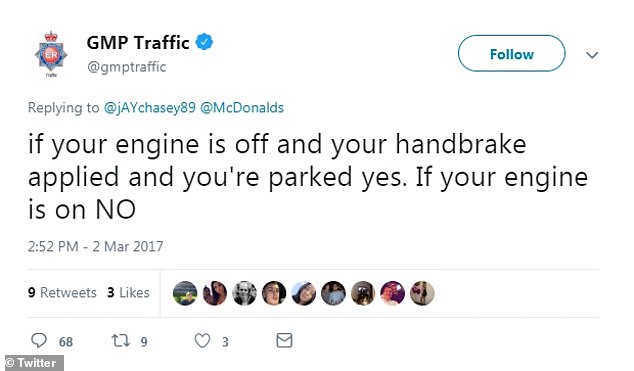 When Jay Chase asked police whether customers can escape a fine while using Apple Pay at a McDonald’s drive thru they said: ‘If your engine is off and your handbrake applied and you’re parked yes. If your engine is on no’

Penalty fines were first introduced in 2003 when drivers could face a £30 fine.

This was raised to £60 in 2007 when drivers could also expect three penalty points.

By 2013 the fine had risen to £100 but there had been no radical reduction in the number of people using their phones while driving.

‘To provide a strong deterrent in order to change behaviour, all drivers will face six penalty points regardless of vehicle type.

‘This means all drivers using a mobile phone will be treated equally seriously. We also propose that a remedial course is not offered to first-time offenders.’