Drivers who don’t buckle up facing points on licence

Motorists caught not wearing a seatbelt could be given penalty points on their licence under measures to cut road deaths.

The proposals also include in-car breathalysers for known drink-drivers, which will not let a vehicle start if they are over the limit.

And graduated licences – banning young drivers from the road at night or from taking passengers under a certain age – are part of the Department for Transport plans announced today.

Currently, motorists caught not wearing a seatbelt can be hit by an on-the-spot fine of £100, which will not lead to penalty points or affect their insurance premium. But raising penalties for this group is being considered as one of 74 actions to improve road safety.

In 2017, more than a quarter of car deaths involved people not wearing a seatbelt (stock image)

In 2017, more than a quarter of car deaths involved people not wearing a seatbelt. A public consultation could take place later this year but any plans would not come into effect until 2020 at the earliest.

Road safety minister Michael Ellis said: ‘Far too many people are not wearing a seatbelt, needlessly putting lives at risk.’

The Department for Transport is considering the recommendations made by the Parliamentary Advisory Council for Transport Safety on seatbelt use. In April, a survey found seven in ten drivers support giving those who shun seatbelts penalty points. 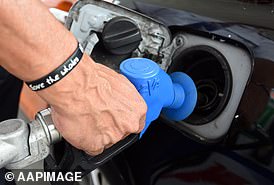 Average pump costs across the country jumped to 128.72p per litre for petrol (stock)

Drivers are facing the highest July petrol prices for five years, with the cost of filling a tank rising £7 in the past two years.

Average pump costs across the country jumped to 128.72p per litre for petrol and 131.61p for diesel this week, the highest July price since 2014, meaning it will cost almost £71 to fill up a typical family car.

The cost could soar further on the motorways, with some service stations adding as much as £10 to the cost of filling up.

Plans for ‘alcolocks’ may prove more controversial. The breathalyser-type devices could be connected to the ignition of convicted drink-drivers’ cars as part of their sentence. The motorist would blow into the device and, if they are over the alcohol limit, the car would fail to start. The Parliamentary Advisory Council has been given £50,000 to explore drink driving trends and how best to curb them, with the results due out next year.

It will also look at a scheme to ban young drivers from certain practices until they have gained more experience. The ‘graduated licence’ could feature restrictions on driving at night or with passengers under a certain age. It may also bar licence holders – who would most likely be under 25 – from driving cars with engines above a certain size.

The DfT did not reveal how long the measures would be in place after a driver has passed their test. Under current rules, new drivers have their licences revoked if they rack up six penalty points within the first two years.

Graduated licensing schemes already operate in parts of the US, Canada, Australia and Sweden.

AA president Edmund King OBE said: ‘We believe penalties for not wearing seatbelts should be toughened up as soon as possible, including higher fines and more penalty points.

‘It is perhaps surprising that drivers had not learnt from the high-profile car crash that claimed the lives of Princess Diana, Dodi Fayed and driver Henri Paul, none of whom were wearing seatbelts.’