Large crowds gathered at the roadside to watch drivers show off their souped-up cars on Heartlands Parkway in Saltley, Birmingham on Sunday.

As the cars drove through a roundabout flaunting their modified vehicles to the spectators, several police vans drive in and block a few cars in their way – stopping the event.

Police drone footage shows large crowds gathered at the roadside to watch drivers show off their souped-up cars on Heartlands Parkway in Saltley, Birmingham on Sunday

Aerial footage shows car fans quickly flee the scene and scatter to avoid being caught by the police.

No arrests were made on the night despite a High Court injunction in place banning street racing across Birmingham, Solihull and the Black Country.

Police also swooped at another similar event being held on the same night on the A38 in Sutton Coldfield, in the West Midlands. 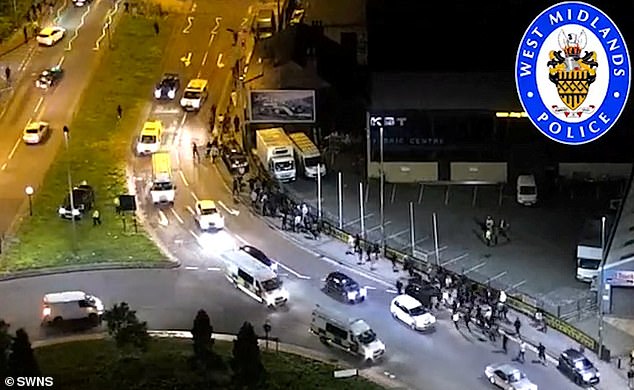 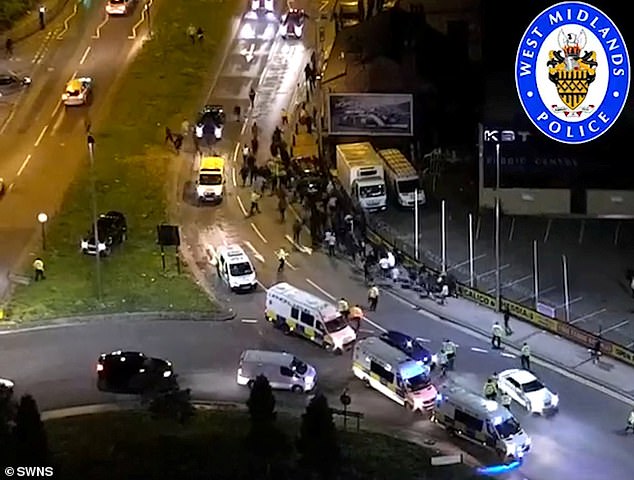 Spectators quickly fled the scene in a bid to not get caught by the officers. No arrests were made on the night

Road blocks were put in place and stop checks carried out on drivers and around 50 spectators who had lined the streets to watch the road menaces.

West Midlands Police said inquiries are continuing as the force vowed to take firm action against those breaching the injunction.

Chief Superintendent Steve Graham, of West Midlands Police, said: ‘We understand the impact that this type of anti-social activity has upon our communities, not to mention the danger it presents to participants and spectators. 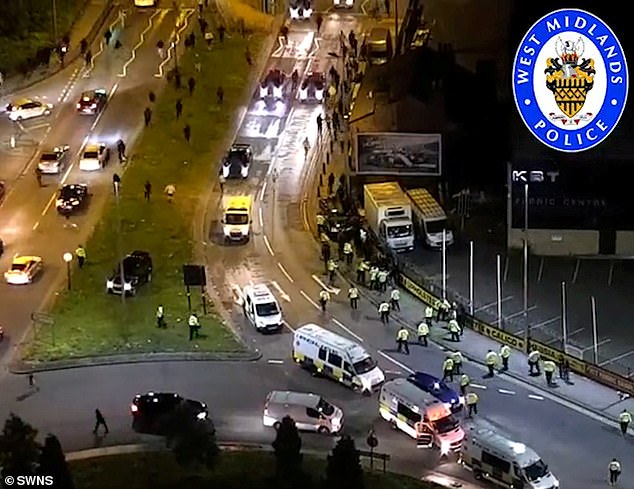 With the most of the crowd dispersed, only a few people can be seen being held back by officers. The bust on the illegal cruising event comes after a High Court injunction that bans street racing across Birmingham, Solihull and the Black Country

‘We are determined to continue these operations to send a message to those involved that we will not tolerate this behaviour and those who continue to drive dangerously or participate will be brought before the courts.

‘Our drone footage captures the activity in detail and we are examining footage taken last night to determine who was involved so that we can assist Birmingham City Council to pursue court action.

‘Drivers can also expect their insurance companies to be informed – and for their policies to be nullified – if they are caught joining illegal car gatherings which would clearly be at odds with the terms of their insurance cover.’ 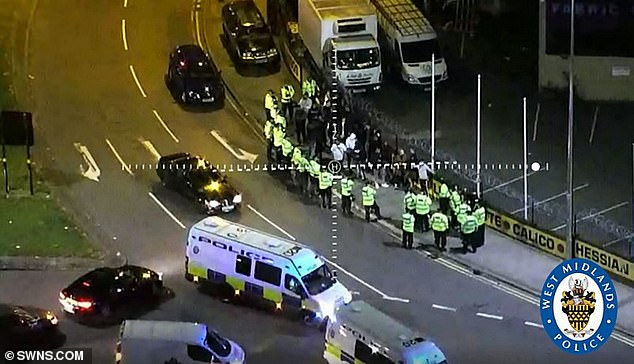 The High Court order bans people from taking part in car cruising, including speeding, racing and driving in convoy, performing stunts and causing an obstruction on a public highway.

It also bans spectating and promoting such events.

Inquiries are ongoing. Anyone with dashcam footage of the gathering is asked to contact West Midlands.