Drone passes within 5 feet of passenger jet at Heathrow

The pilot of an Airbus A321 passenger jet arriving at Heathrow thought he hit a ‘three or four engine drone’ approaching the airport after spotting the device less than five feet from the aircraft.

The jet was flying at 1,700 feet over Kew in West London on October 25, at 11.50am when the jet’s first officer spotted the drone out of his window at a range of about 5 feet.

The crew believed the drone was so close to the jet that there was no way it could not avoid striking the aircraft’s tail.

The Airbus A321 was at 1,700 feet approaching Heathrow Airport, pictured, when the pilot spotted the unmanned drone out of his window approximately five feet from the jet 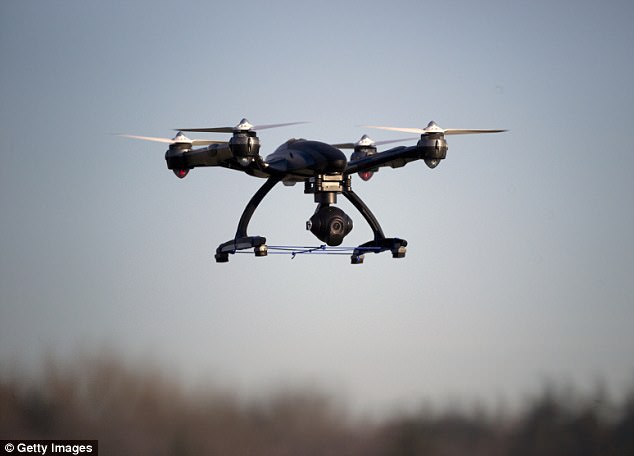 Fortunately the aircraft was able to land on runway 27 left without incident and engineers found no evidence that the jet had been damaged by the drone.

The aircraft was later released back into service after a full inspection.

However, the flight crew reported the incident to the UK Airprox Board, who assemble evidence of near misses in UK air space – including incidents involving drones.

According to the Airprox board the drone was being ‘flown in the vicinity of an airfield approach’ and ‘was endangering other aircraft at that location and altitude’.

The report concluded: ‘The Board considered that the pilot’s estimate of separation, allied to his overall account of the incident and his inability to avoid the drone portrayed a situation where providence had played a major part in the incident and / or a definite risk of collision had existed’.

Other drone incidents included an Airbus A320 on short finals at Manchester’s 23 Right runway when a passenger, who is also a qualified A320 pilot saw a ‘quadcopter’ pass 50 feet to the right and 50 feet below the aircraft.

Neither of the pilots on the flight deck spotted the drone which happened about 500 feet above the ground on November 4.

On November 17, around four miles north east of Manchester airport a Dornier 328 spotted a drone at around 1,400 feet while approaching the airfield.

The pilot said he spotted the object ‘slightly ahead and below’ his aircraft. He said there was ‘’very little time from first sighting to it passing behind and out of view’.

The Airprox report said the chance of collision between the drone and the aircraft was ‘high’.