Infectious diseases kill 20 percent fewer Americans now than they did in 1980, but people in some counties are still far more vulnerable than others, new research reveals.

The new study’s granular look at county-level deaths sheds light on the parts of the US where poverty and aging populations are driving surprisingly high death rates from easily treatable diseases.

Meanwhile, deaths from diarrheal diseases – commonly dismissed as problems of developing countries – have sky-rocketed by nearly 500 percent in the US since 1980.

Counties in Florida, South Dakota and the South still lose many people to tuberculosis, HIV, and hepatitis.

The authors of the University of Washington study urge that greater access to health care in poor communities and broader vaccination are key to keeping preventable diseases at bay.

Nationally, rates of death from infectious diseases have fallen by nearly 20 percent in the US, but there were still increases in places like the South, where there are more poorer counties

Between 1980 and 2014, nearly 4.1 million people died of an infectious disease, but 18.7 percent fewer people were dying of these illnesses by the end of that time period than were at the beginning.

Though 1980 is hardly the distant past, with time, hygiene, medicine and access to health care have only improved in the US, making infectious diseases less common and more treatable.

These broad decreases have been previously noted, but, as the new study’s authors note, ‘national- or state-level estimates can be misleading because they can mask variations at the local level.’

This distinction gets to the heart of the nature of infectious diseases, which begin and spread in small populations.

Modern medicine and public health policies can mostly contain these outbreaks from reaching an entire state’s our country’s population, but ‘estimating the burden of infectious disease at the county level can help identify geographic differences and their root causes,’ the researchers wrote.

Though it is less common now than it was in 1980, lower respiratory infections are still the most common killers in the US, accounting for nearly 80 percent of all infectious disease deaths that year.

Such high rates are likely due to the aging American population, as these infections are particularly common among elderly people, the authors suggested.

‘As the US population ages, infectious diseases among elderly persons will put strains on the medical system,’ they wrote.

Only diarrheal diseases killed more people in 2014 than in 1980, increasing by an astonishing 484 percent.

The sharpest increases occurred between Maine and Missouri, with high death rates also reported in counties in New Mexico, California, California and Arizona.

Diarrheal disease deaths were likely driven up by the aging population as well, considering that people over 65 are nine times more likely to get the common bug, C. diff, than are younger people.

Together, diarrheal diseases and respiratory infections cost Americans $46.3 billion, in 2013 alone, underscoring the importance of improved prevention and treatment for both common illnesses. 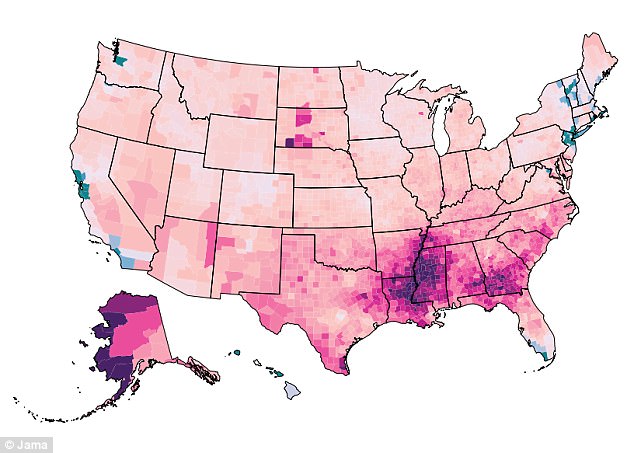 Once more common on the wealthy West Coast, high rates of HIV/AIDS deaths have moved to the poorer South in recent years

Infants, the elderly and people with compromised immune systems – such as those living with HIV/AIDS – are more vulnerable to diarrheal disease. Deaths from both diarrhea and HIV/AIDS remained high in the south.

Notably, HIV/AIDS ‘mortality increased first in some of the wealthiest US counties on the West Coast, but has shifted to some of the poorest counties in the southeastern United States,’ the study authors wrote.

They speculated: ‘Affluent populations might have been able to benefit from advanced medical HIV care and changing risky behaviors for HIV infection.’

But the same was not true for the poorer southern counties, where HIV/AIDS continued to kill more people as heroin use climbed, suggesting that needle sharing may have contributed to these high death rates.

The study authors also noted that some very specific populations are at an out-sized risk of dying from HIV/AIDS.

More people died of HIV/AIDS in Union County, Florida than anywhere else in the US in 2014, with the disease accounting for about 65 out of every 100,000 deaths there.

The same county had the greatest number of deaths from hepatitis. Both numbers, the study authors wrote, were likely due to the higher risk among inmates at a large prison, who account for 40 percent of the county’s population. 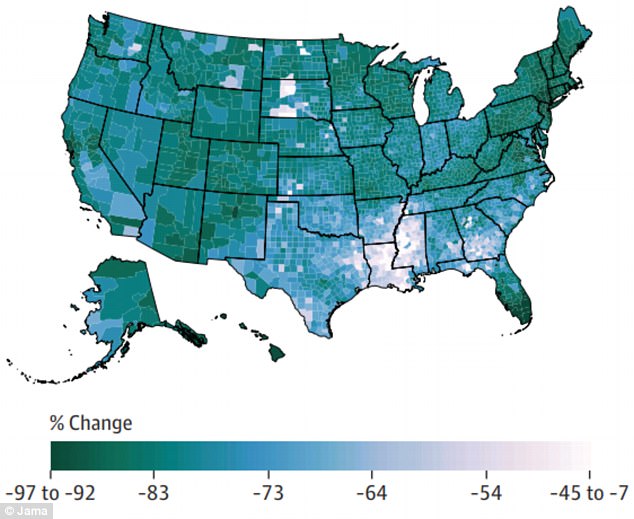 Tuberculosis deaths have become less common in the US overall, but there have been spikes in counties where people are poorer, smoke and drink more and have worse nutrition

Hepatitis deaths were down by 2014, but that decline followed an increase between 1983 and 2000, when, the study authors speculate, the US saw the fallout from the popularity of injected drugs in the previous years.

Like most infectious diseases, poorer counties were hit harder by both hepatitis and tuberculosis.

Though tuberculosis has not been a major cause for concern in the US for many years, the disease still thrives in poorer areas.

Oglala Lakota County in South Dakota had the highest rates of deaths from both tuberculosis and meningitis.

This trend was driven by ‘a multiplicity of factors’ as the county is ‘disadvantage overall…[with] very high rates of poverty, smoking, heavy drinking and diabetes,’ all of which put those people at greater risks for tuberculosis, the authors wrote.

‘Hence, it is necessary to focus on infectious diseases prevention through public health strategies to decrease their burden,’ the study authors wrote.

‘There is also a need to improve access to and quality of health care throughout the United States to improve health outcomes and increase immunization coverage for preventable diseases,’ they concluded.