Drug addict stole £25,000 from her mother to fund habit

A heroin addict left her mother with just 40p after stealing her life savings to fund her drug habit.

Katie Robinson, from Hull in East Yorkshire, pleaded guilty to theft and fraud after stealing some £4,000 from her mother’s Santander bank account on September 6.

The 27-year-old had already plundered £20,000 from the account, including her dead father’s insurance payment and her mother’s redundancy payout.

After the hearing Robinson, who will not be sentenced until next year, boasted about her crime on Facebook and changed her job to ‘HMP Newhall’.

The judge deferred sentencing Robinson for six months after her mother told him prison simply keeps her daughter ‘on the methadone’.

Steven Garth, defending Robinson, told Hull Crown Court: ‘This is a young woman who is acquiring for herself a rather bad and persistent record. It’s very much concerned with her heroin addiction, which she’s had for a very long time.

‘She seems to serve sentences, get released, and straight away get involved in drugs again. She has been stealing bank cards from her mother.

‘Her mother is in court today, and she made a point of speaking to me. She feels it’s time her daughter is helped if at all possible.’ 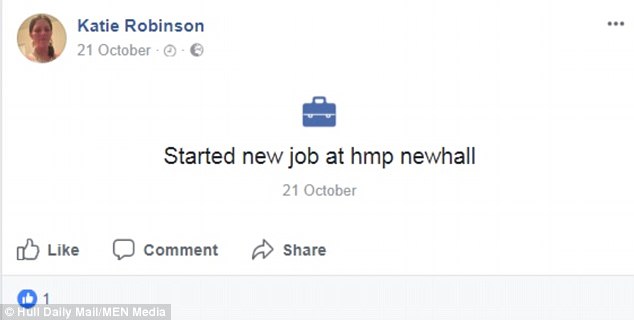 After the hearing Robinson, who will not be sentenced until next year, boasted about her crime on Facebook and changed her job to ‘HMP Newhall’ 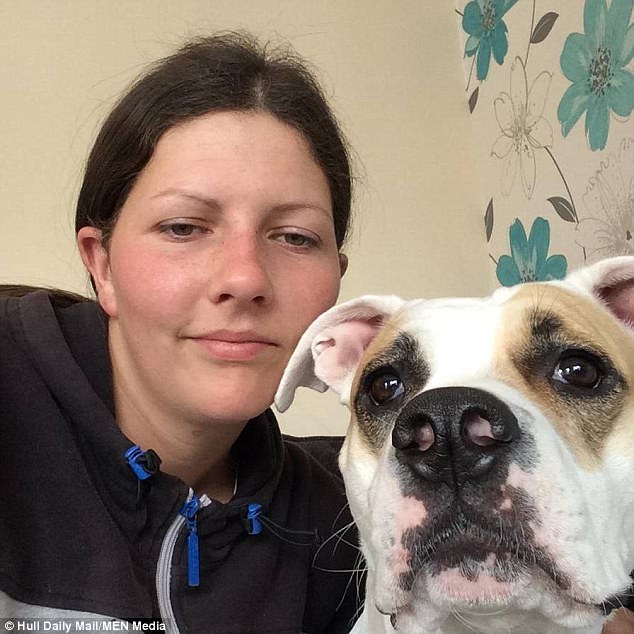 Robinson, from Hull in East Yorkshire, pleaded guilty to theft and fraud after stealing some £4,000 from her mother’s Santander bank account

Judge Mark Bury asked Robinson’s mother to address him from the witness box to find out more about her background.

She told him: ‘The kid’s had problems since she was born. She’s got ADHD but was not diagnosed until 14 and a half, and I had to deal with it on my own.

‘She was expelled from school because she can’t concentrate. She’s got a concentration span of about four seconds.

‘She’s better on medication; it made her see the consequences of her actions. She’s had to put up with things at home; there was domestic violence.’

Robinson’s mother said she had recently undergone rehabilitation and counselling for a drink problem.

She added: ‘I never got any money back the last time.Her father died. It was her father’s insurance. I got made redundant.

‘She left me with 40p and I had to go on food parcels, and I’ve been a community psychiatric nurse for 23 years. I was good at my job.’

Judge Bury said: ‘Some might say she has to be sent to prison – that would keep her off drugs.’

‘It doesn’t, it keeps her on the methadone,’ the mother replied.

The judge asked: ‘If I were to consider giving her another chance, is that something you would be approving of?’

She said: ‘From my point of view it’s very difficult, because whether she’s locked up or not there’s no change in her behaviour; she’s still an addict and behaves like an addict. Without rehabilitation in a residential place I don’t think it will change.

‘I can’t wipe her bottom any longer. She keeps saying she’s an adult – well behave like an adult then.’

The judge said he would defer sentencing Robinson for six months. She will be released from prison, and if she can stay off drugs and out of trouble for six weeks will be offered residential rehabilitation by the probation service.

Judge Bury told her: ‘You don’t deserve it, Miss Robinson, really, but I know you have problems and your mother is still supportive of you and you have her to thank for this.

‘If you don’t make a go of it all the court has left is to punish you for what you’ve done.’