Were a gold medal to be awarded for the best anthem at the Tokyo Games, there would surely be only one winner.

An excerpt from Tchaikovsky’s magnificent Piano Concerto Number One has been played during podium ceremonies in Japan on seven occasions so far.

Each one has marked a golden triumph for an athlete from ‘ROC’, whose team currently lies fourth in the overall medals table, trailing only the hosts, China and the USA.

But who or where is the country of ROC, you might wonder? The answer is Russia, in all but her traditional name, anthem, flag and federation logo – not to mention a suitable air of contrition.

Despite a current umbrella ‘ban’ on its participation in international events like the Olympics because of state-sponsored doping, Russia has been allowed to send 335 competitors to the world’s most prestigious sporting jamboree.

Beautiful music and other window-dressing such as calling itself the Russian Olympic Committee – to suggest an appearance of ‘neutrality’ – cannot mask the stench of corruption and appeasement.

During the Cold War, competitors from behind the Iron Curtain were widely suspected – with justification – of taking illegal substances to boost performances.

East Germany was perhaps the most infamous example of institutional cheating – some of its anabolic steroid and testosterone-administered female athletes looked as if they could give the men’s middleweight boxing contenders a run for their money.

East Germany no longer exists. The Iron Curtain is down. But the evidence is that Russia did not change when it came to formalised doping.

The extraordinary story of her recent exposure as a serial drugs cheat and subsequent avoidance of meaningful punishment begins in 2010.

That was the year of the Vancouver Winter Olympics, in which Russia’s relatively poor performance caused concern, not least in the Kremlin.

Measures had to be taken to avoid a repeat which might further damage national – and, by association, President Vladimir Putin’s – prestige. The Russian Anti-Doping Agency (RUSADA) had been established two years earlier, supposedly to stop the cheats.

But in 2010 a member of its staff, Vitaly Stepanov, began secretly informing the World Anti-Doping Agency (WADA) that the opposite was taking place. WADA was slow to take action. Eventually Stepanov went to a German TV broadcaster.

Their collaboration resulted in a sensational documentary in 2014 titled The Doping Secret: How Russia Creates Its Champions.

It was East Germany all over again. Now WADA had to act. Russia was banned from competing in world track and field events.

The laboratory where corrupted tests were carried out – the WADA-accredited Moscow Anti-Doping Centre – was prohibited from conducting further analysis. This development produced another even more devastating whistleblower.

In early 2016 Grigory Rodchenkov, the head of the Moscow laboratory and ringmaster to its misdeeds, fled to America.

He had feared he would be ‘disappeared’ by the Kremlin – two colleagues had already died in mysterious circumstances. From the security of the US witness protection programme, Rodchenkov began to sing like a performance-enhanced canary. 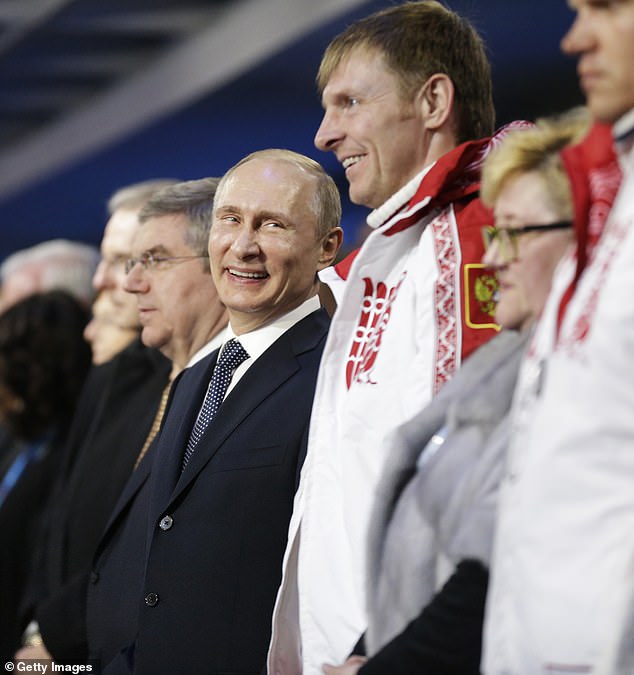 Russian athletes are competing as the ROC after the team was banned from international tournaments over a doping scandal, which focused on boosting performance at the 2014 Sochi Winter Olympics (pictured: Vladimir Putin at 2014 Games)

He alleged that Russia’s intelligence services were involved in the doping programme which had been focused on boosting performances at the 2014 Sochi Winter Olympics, upon which Putin had lavished billions of pounds.

It was a presidential vanity project and he expected a record medal haul in return.

Rodchenkov said Russian success at Sochi was underpinned by systematic cheating. Tainted urine samples were swapped for clean ones. At least 15 Russian medallists benefited in this way.

Using new analytical methods, both WADA and the International Olympic Committee began to re-examine Russian testing results, not only from Sochi but other recent Olympiads, including London 2012.

He found the London Games were ‘corrupted on an unprecedented scale’ by Russian state agencies – including RUSADA and the security services – which colluded with sports stars to hide their doping. Fifteen of these competitors were medallists.

At Sochi, the winners of four gold medals, as well as a female silver medal winner, had physiologically impossible salt readings in their urine – evidence their samples had been fixed.

Two female ice hockey players had male DNA in their urine samples. Would Russia would be punished with suitable severity?

At the 2016 Rio Olympiad, her track and field athletes were banned but competitors in other sports who had been part of the doping programme were present.

Violation-free athletes were allowed to compete at the 2018 Winter Olympics as an ‘Olympic Athlete from Russia’ (OAR) rather than a Russian athlete.

That summer, Russia was still allowed to host the football World Cup as if the doping scandal had never taken place. And there was more good news for the Kremlin as WADA voted to reinstate the Russian Anti-Doping Agency.

WADA set conditions – Russia would acknowledge previous infractions and allow access to testing data from the Moscow laboratory. Russia agreed, but it was lip service.

Some of the data that was received appeared to have been tampered with. In December 2019 WADA banned Russia from major international sporting events for four years.

So now we find ourselves watching the ROC compete in Tokyo. Russia’s first choice ROC anthem was the patriotic folk song Katyusha. But this was rejected. Tchaikovsky would have to do as camouflage.

The ROC flag is three flames – in the Russian colours of white, blue and red – burning over the Olympic rings.

Some might see it as a fitting representation of the immolation of sporting rules and ideals.