An Australian Open wildcard is set to cheer up Maria Sharapova after a shock Brisbane International first-round loss compounded a horror grand slam build-up that included a trip to the hospital.

Open tournament director Craig Tiley revealed on Wednesday that 2008 champion Sharapova will receive a wildcard entry as she attempts to fight back from her current world No.147 ranking.

The five-time grand slam champion cut a forlorn figure being bounced out of the Brisbane International by American qualifier Jennifer Brady in three tough sets on Tuesday night.

Sharapova, 32, is battling after being frustrated by a recurring shoulder complaint that has plagued her since serving a doping ban, limiting her to just eight events and 15 matches in 2019.

But it wasn’t the shoulder that caused problems before the Brisbane International, her first tournament since last September’s US Open.

‘I’ve been fighting virus for a couple weeks and ended up in the hospital the other day, so that wasn’t fun,’ she said.

‘I just couldn’t keep anything in (but) that’s the extent that I’m going to share with you.’

Despite her nightmare build-up, Sharapova initially didn’t show any signs of rust in her opening clash with world No.53 Brady.

However, the more the American qualifier fought the more Sharapova fatigued on Brisbane’s stadium court. 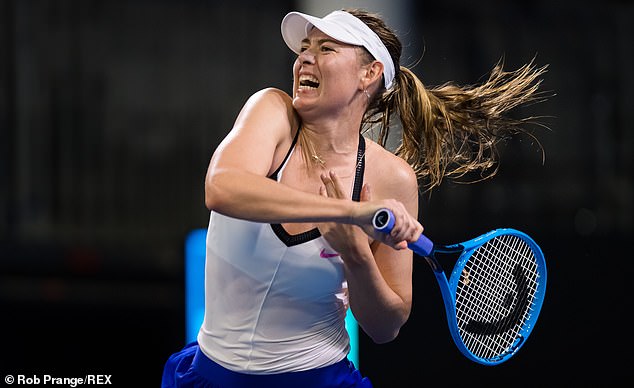 Sharapova will receive a wildcard entry as she attempts to fight back from her current world No.147 ranking

‘I think I’m always disappointed because it’s a result-oriented sport but I have to be proud of my effort,’ she said.

‘Yes there are a lot of improvements I need to make but I fought really hard.

‘I think I did a lot better than I expected of my body.’

Sharapova was suspended from the sport for 15 months in 2015 for doping after testing positive for banned drug meldonium.