Drug dealer, 14, knocked off moped and killed by gang rivals

The family of a murdered teenager ran out of the courtroom as harrowing CCTV footage showing his killers stabbing him to death was shown to jurors today.

Jaden Moodie, 14, was allegedly knocked off his moped by rival London gang members and then stabbed nine times in a ‘violent and frenzied’ attack, the Old Bailey heard on Wednesday.

Jaden’s family wailed and bolted from the courtroom when the distressing footage allegedly showing 19-year-old Ayoub Majdouline and four others take part in the brutal slaying.

Majdouline is accused of ‘butchering’ Jaden after he and four friends cruised around London in a stolen black Mercedes looking for rivals to attack, jurors were told. 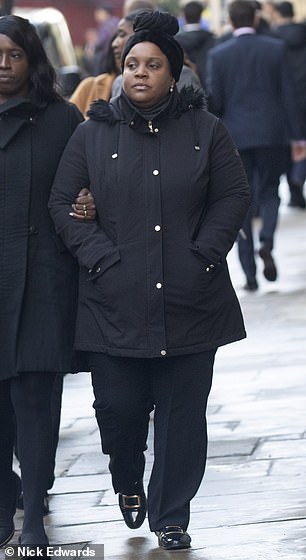 Jaden Moodie’s family wailed and bolted from the courtroom when the distressing footage allegedly showing 19-year-old Ayoub Majdouline and four others taking part in the slaying. Jaden (left) was knocked off his moped and stabbed nine times (his mother Jada Bailey, right) 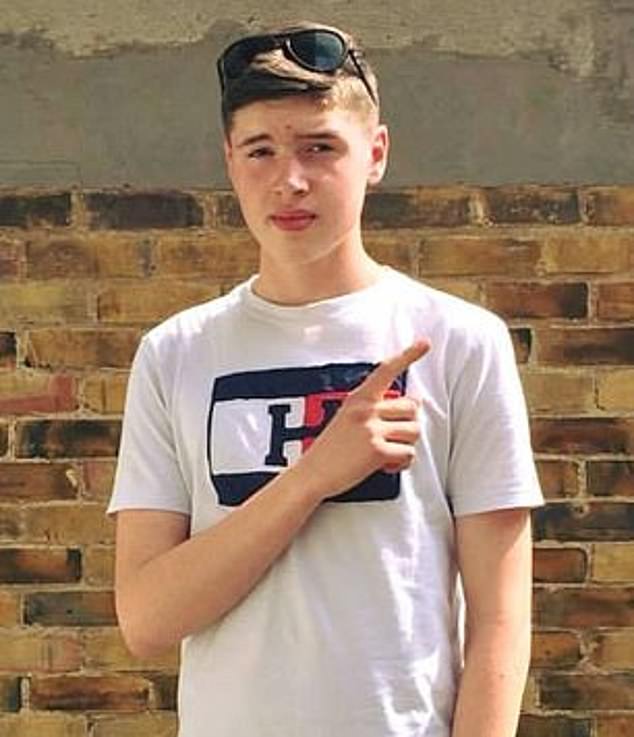 Ayoub Majdouline is accused of ‘butchering’ Jaden after he and his friends cruised the streets of London in a stolen black Mercedes looking for rivals to attack, jurors were told

Jaden was knocked off his moped by the saloon car that swerved into the oncoming lane and ploughed into him head on, before he was stabbed nine times in the chest and shoulders, the court heard.

Five suspects then fled in the car as Jaden was left to bleed to death in the road, jurors were told.

Police believe the victim, thought to handle drugs for a London gang, was targeted by a rival group of criminals.

Oliver Glasgow, prosecuting, said: ‘Four males got out while the driver stayed put [and] ran up to Jaden Moodie who was lying defenceless and seriously injured on the ground.

‘Rather than help him the three males embarked upon a violent and frenzied attack repeatedly stabbing him with knives that they must have armed themselves with for the purpose of such an attack.

’14 seconds was all it took and Jaden didn’t stand a chance.’ 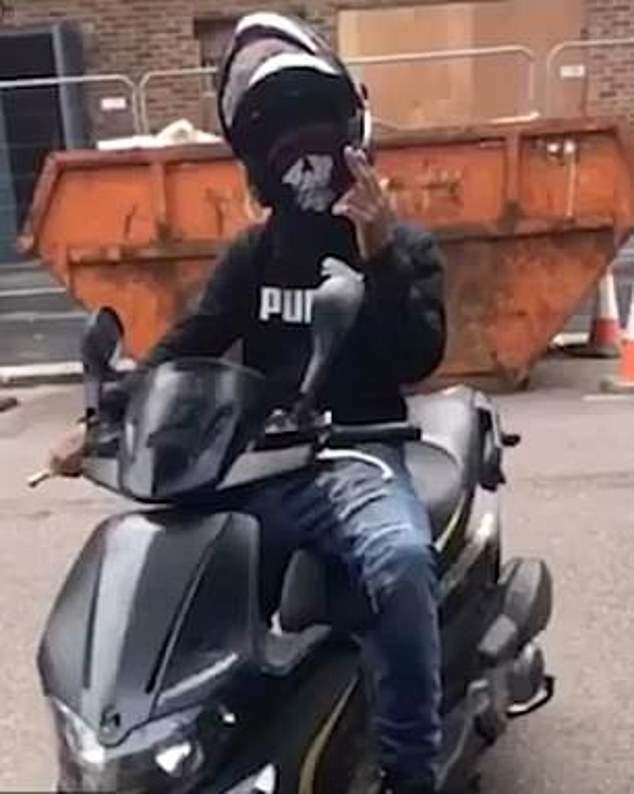 Jaden was knocked off his moped (pictured) by the stolen Mercedes that swerved into the oncoming lane and ploughed into him head on, before being stabbed nine times in the chest and shoulders, the court heard

The killers sped off in the Mercedes leaving the 14-year-old to bleed ‘slowly’ to death in the road, jurors were told.

Jaden was running drugs for kingpins of a rival gang around the residential area with ‘no idea’ of the fate that awaited him moments later, prosecutors claim.

‘The damage was catastrophic and Jaden Moodie slowly bled to death in the road.

‘The Mercedes did not travel far before the driver pulled into a quiet cul-de-sac and left the car in a parking bay.

‘All five occupants got out and calmly walked away as if nothing had happened.

‘Doubtless they had anticipated they would be caught by CCTV cameras hence the reason for covering their faces.

‘As Jaden Moodie’s killers left the area, they threw away a knife a pair of yellow rubber gloves in a drain beside the road. 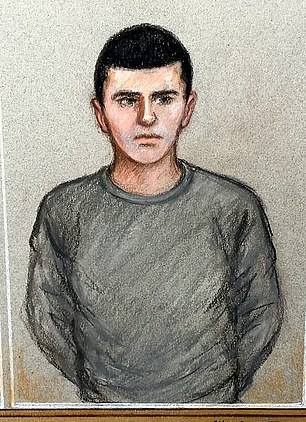 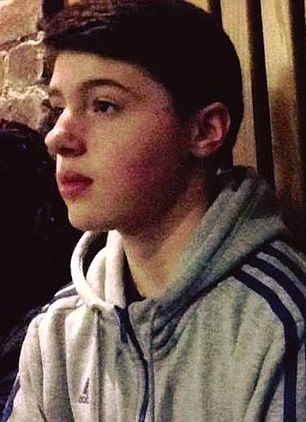 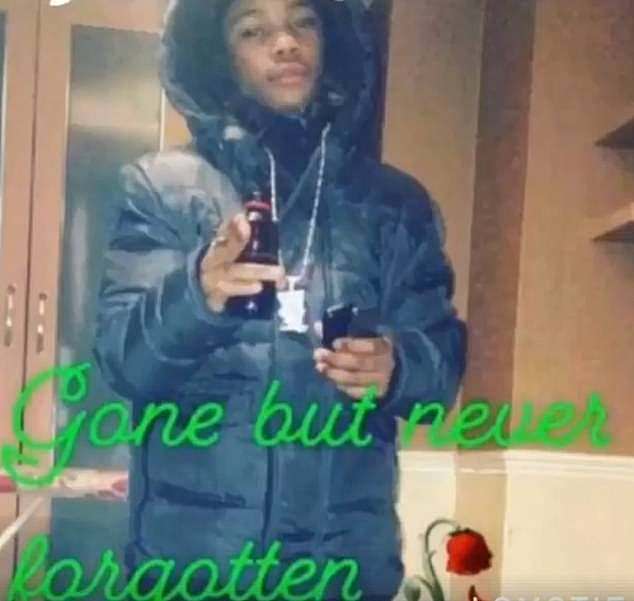 ‘These were found the next day.

‘A few days after the knife and gloves were found the police discovered a pile of burnt items in a churchyard.

‘This defendant was part of an armed group that went looking for a rival and, once they had found him, the group chased down the target and produced their weapons and the group butchered him.

‘What matters is [that he] was part of a group that set out ready for violence and that he wanted the victim to be really seriously hurt.

‘The occupants of the vehicle however were not ignorant of what was to happen.’

‘They had already taken steps to disguise themselves indeed the driver can be seen to have a pair of yellow gloves on his hands as he drives and the only reason to be dressed in such a fashion must have been because they had murder on their mind.’

Jurors heard how a forensic analyst passing by chance ran over to Jaden after he heard a ‘crashing sound’ and saw the car making off with the teenager collapsed in the road.

Ian Hounsell stayed with other members of the public helping the 14-year-old until emergency services quickly arrived on the scene.

Despite the best efforts of paramedics Jaden was pronounced dead from ‘catastrophic’ blood loss.

Mr Glasgow said: ‘Ian Hounsell is a forensic practitioner and by chance he was in the area dealing with an unrelated matter at [an address on the same road].

‘Mr Hounsell returned to his vehicle when his attention was drawn to a crashing sound.

‘He looked up to see the black Mercedes vehicle making off and a person, Jaden Moodie, lying in the road.

‘Mr Hounsell contacted the control room and relayed what he had seen and heard.

‘Mr Hounsell along with other members of the public went over to help Jaden Moodie.

‘The emergency services were called. Police officers and paramedics soon arrived on scene. They did their best to save Jaden’s life.

‘However, he had received numerous stab wounds and the damage caused by those injuries was too severe.

‘There was nothing that could be done to save his life.

Majdouline denies murder and possession of a offensive weapon.