This is the heart-stopping moment a driver allegedly high on drugs is sent skidding across a country highway after pulling out directly in front of a truck.

The driver, a 27-year-old man, had called NRMA roadside assistance after running out of petrol on the M1 motorway near Minmi, north of Sydney.

But when the NRMA technician arrived and filled his car with fuel, allegedly advising him he was in no state to be driving, he lurched suddenly onto the road.

Dashcam footage shows the Kia four-wheel-drive, with a female passenger and dog inside, flying across the two-lane highway as the truck screeches to a halt.

The NRMA technician claimed the Kia driver had been acting ‘erratically’.

Remarkably, police say neither of the occupants of the Kia nor the dog were seriously hurt.

The driver was taken to hospital and submitted to a blood test to check for illegal drugs and police say they are anticipating further action.

Both vehicles were towed away and the road was closed.

The driver was taken to the John Hunter Hospital and suffered impact injuries and damage caused by his seat belt, police from Lake Macquarie Highway Patrol said.

The truck driver remained in hospital.

His mother has said the driver ‘remains in hospital unable to move,’ on a Facebook post shared by Traffic and Highway Patrol Command.

Police said the driver appeared to be under the influence of drugs, but the results of blood tests won’t be available for ‘weeks’. 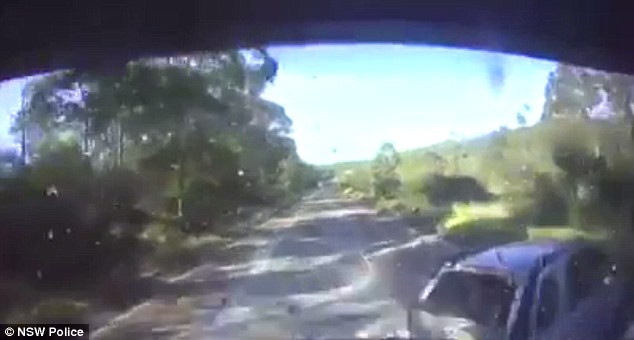 An NRMA technician noticed the driver had been acting erratically and advised him to discontinue driving. However, the man drove without warning onto the road, leaving no time for the truck behind him to stop, sending the Kia flying across the next lane