Robert Brown, pictured, 53, has been found dead in prison months after starting a 10-and-a-half year jail term for causing the deaths of two young boys in Coventry in a hit-and-run crash

A drug-driver who was jailed for 10-and-a-half years for killing two young boys in a hit-and-run crash has died in prison.

Robert Brown was sentenced in April for mowing down Corey and Casper Platt-May, aged six and two, in Coventry in February while high on a cocktail of drugs.

The circumstances of his death are currently being investigated but it is understood there were no other parties involved.

He had his jail term increased from nine years to 10 and a half by the Court of Appeal in July after public outrage at his initial sentence being ‘too lenient’.

A spokesman for Serco, which manages the prison, said: ‘We can confirm a prisoner died yesterday (Christmas Day) at HMP Dovegate, and, as is normal, the death will be subject to a coroner’s investigation.’

Brown, 53, and Gwendoline Harrison, 41, admitted causing the deaths of brothers Corey and Casper Platt-May, aged six and two, at Warwick Crown Court in March, a month after the collision.

He pleaded guilty to causing their deaths by dangerous driving while Harrison admitted assault with intent to resist arrest after attacking police.

The boys were out on a half-term trip to the park with their mother, Louise, and their aunts and cousins when the tragedy unfolded.

The family suffered another blow when the boys’ father Reece Platt-May, 30, was found hanged at a Greek hotel while on holiday in May. 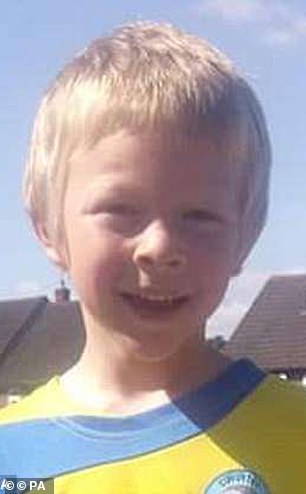 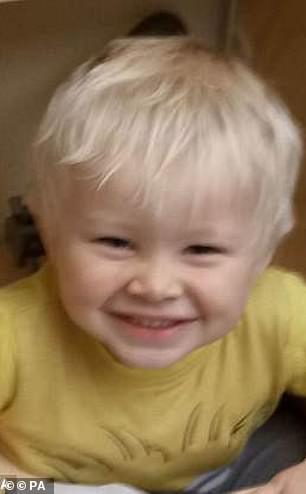 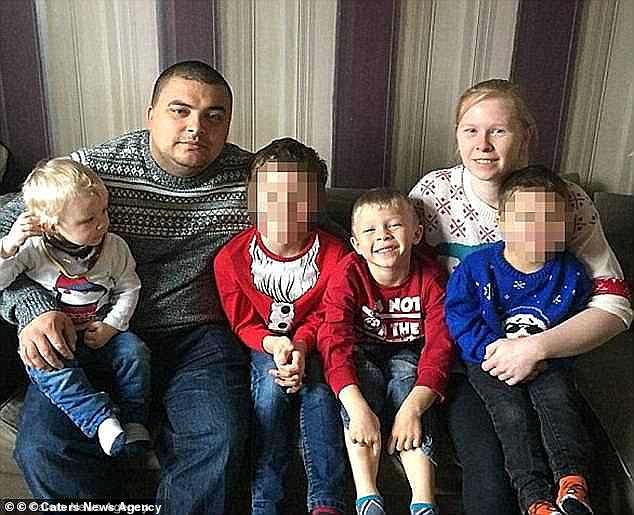 The family was hit by further tragedy when the boys’ father Reece, left with Casper, was found hanged while on holiday in Greece in May. Their mother Louise is pictured right with Corey

An inquest has been opened into his death, which Greek officials say was not suspicious, and it will be resumed at a later date.

Brown, of Wyken, Warwickshire, had 30 previous convictions for driving offences.

He was only released from a prison a week before the crash, after being jailed for having an offensive weapon.

Brown had never had a driving licence and was banned from driving at the time of the crash.

He had taken cocaine, diazepam and zopiclone before getting behind the wheel.

His sentence was originally nine years but it was increased on appeal in July. 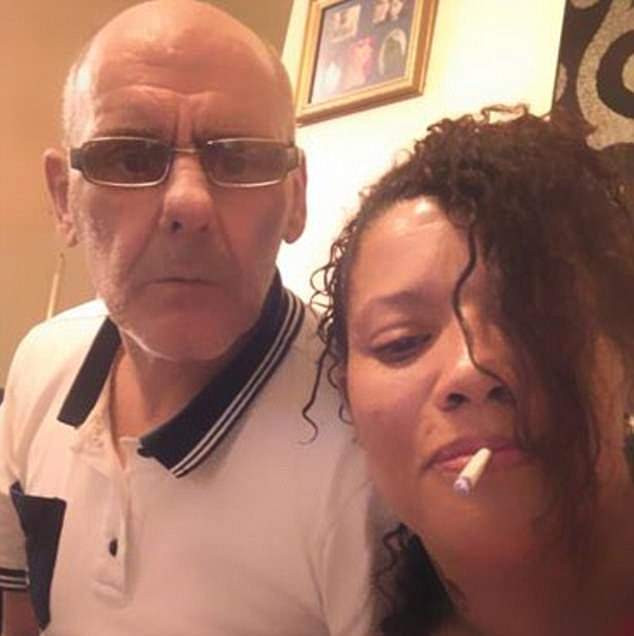 Brown, pictured with passenger Gwendoline Harrison, had taken cocaine, diazepam and zopiclone before getting behind the wheel 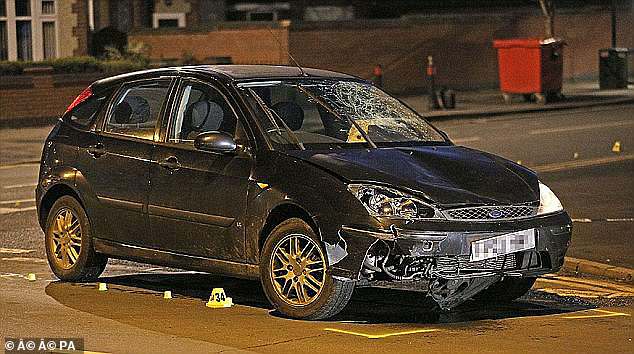 His black Ford Focus, pictured after the crash, was being driven at 60mph in the 30mph zone 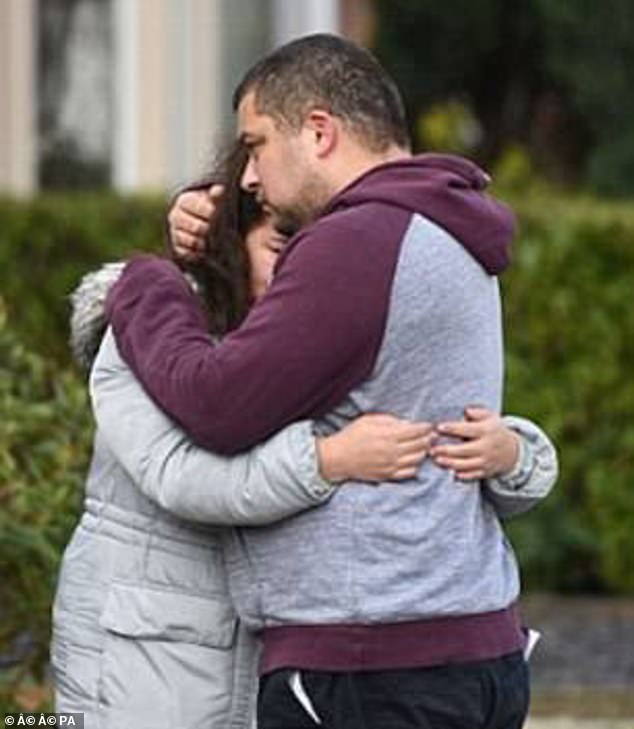 The family of Mr Platt-May, right, pictured here with sister Tia in the aftermath of the crash, were concerned for him shortly before his death due to calls he made from Greece

At a court hearing earlier this year, Brown shouted ‘this is f***ing kangaroo court’ and called the judge a ‘f***ing p***k’ before he was told to sit down or he would be removed from the court.

The boys’ mother previously released heart-rending tributes to her sons, saying Casper was a ‘cheeky’ boy who loved splashing in puddles, while Corey was football-mad and enjoyed maths at school.

Their aunt Tia Fletcher and grandfather Kim May were seen weeping when they visited the scene of the crash.

The children were taken to hospital with severe injuries, but Casper could not be revived and died a short time later.

Corey was rushed into surgery, but later died. Their mother was unhurt.

The boys lived round the corner from the scene of the incident with their mother, a care home worker, taxi driver father and two older brothers, Connor and Cooper. 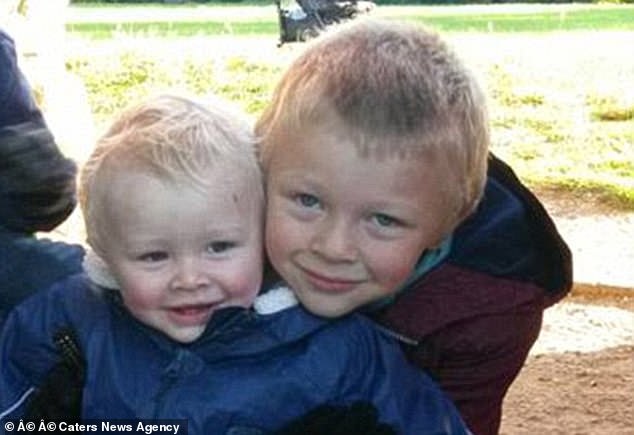 Casper, left, was described as a ‘cheeky little boy’ while his older brother Corey, right, was ‘football mad’, according to his family 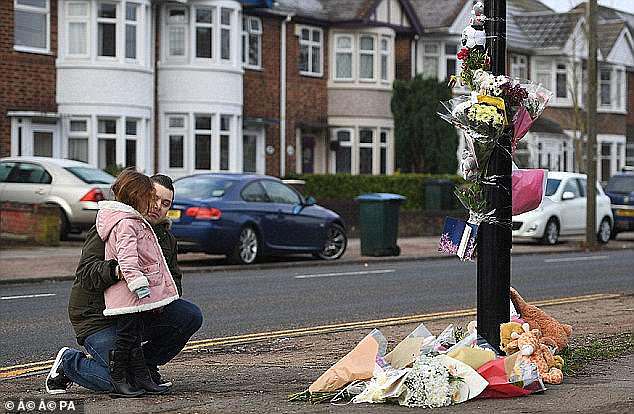 Floral tributes were left at the scene in Coventry, pictured, and people flocked to pay their respects to the boys at a memorial 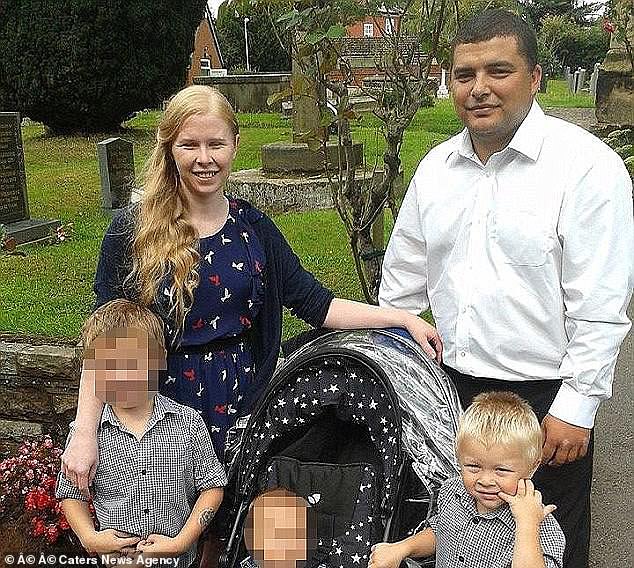 An inquest into Mr Platt-May’s death has been opened and adjourned. He is pictured with his sons and wife Louise

Describing the horrific incident days after it happened, aunt Ms Fletcher said: ‘We were crossing the road and had checked both ways, there wasn’t a car in sight so we step out into the road.

‘Next thing was saw was this black car come speeding round the corner and it just didn’t stop, never seemed to slow down. All it all happened so quickly, it’s just a blur.

‘The car hit the two boys. Casper was sat in his mini cooper toy car and it just smashed it to pieces. It was like a war zone.’

Describing the aftermath of the crash last month, Ms Fletcher, 22, added: ‘The children were in complete panic and screaming and crying. neighbours came running out and everyone was stopping and trying to help. They were doing CPR on Casper and Corey was in the recovery position.

‘Casper had no pulse and he had already gone but Corey had a slight one so they rushed him straight to Birmingham Children hospital. He just didn’t make it.’

She said of the boys’ parents at the time: ‘Louise and Reece are just trying to process whats happened. I spoke to them this morning and they are heartbroken.

‘All the children saw it happen and the eldest brother, Connor, is old enough to understand it all. He just keeps crying.’ 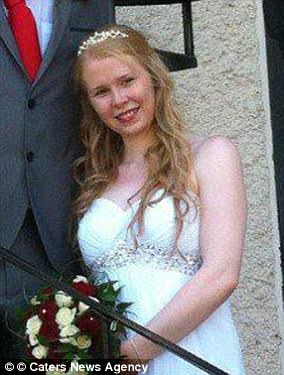 The boys’ mother Louise Platt-May said: ‘Corey was an amazing boy. He never kept still, always had to be doing something and coming up with new ideas of things to do.

‘He loved school more than any kid I know. His favourite subject was maths. But his main passion in life was his football.

‘He has been playing for a local team since he was four but since the day he could hold a ball he was never without one.

‘He will be deeply missed by all that had the pleasure of knowing him.’

Paying tribute to Casper, she said: ‘Casper was a cheeky little boy, always getting into trouble and driving his brothers crazy.

‘But he was so loving and caring and constantly told his family how much he loved them. He loved walking everywhere with his wellies and splashing in the puddles.

‘His smile could light up any room and he will be so so missed by all who knew him.’