A record number of Americans died from drug overdoses in 2020 amid the COVID-19 pandemic, provisional data show.

This represents a nearly 30 percent rise from the roughly 72,100 drug overdose deaths that were recorded in 2019.

The spike was mainly driven by increased use of opioids and specifically fentanyl, the synthetic opioid 100 times stronger than morphine.

For the advisory, the CDC looked at death records received and processed by the NCHS this year.

The team found that the overdose deaths were mainly driven by opioids, which were responsible for 74 percent, or 69,710 fatalities. 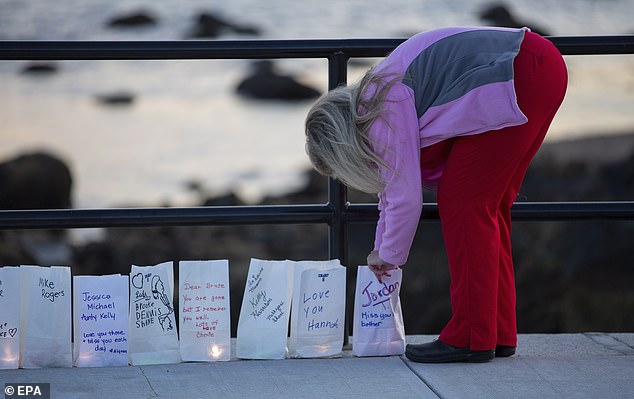 Counties in states such as California and Nevada say much of it is driven by fentanyl, the synthetic opioid 100 times stronger than morphine. Pictured: A woman tends to a luminary during a vigil in remembrance of victims of overdose deaths in Gloucester, Massachusetts, August 31

The data showed that overdose deaths from synthetic opioids, primarily fentanyl, and psychostimulants including methamphetamine rose in 2020.

Overdose deaths from cocaine also increased as did deaths from natural and semi-synthetic opioids like prescription medications.

In fact, the number of opioid prescriptions has decreased by 37 percent between 2014 and 2019, according to the American Medical Association.

However, many people can’t afford prescription painkillers anyway and end up turning to street drugs.

The pattern of drugs involved in overdose deaths has changed in recent years, moving away from heroin and natural opioids to synthetic opioids including fentanyl.

According to the Defense Intelligence Agency, 68 percent of fentanyl and precursors used to make the drug originate in China.

These factory-produced drugs, cheap and easy to make, are sold either directly to the U.S. or via trafficking networks set up in Mexico.

According to the Southern Nevada Health District, Clark County – of which Las Vegas is part – saw 63 deaths involving fentanyl among residents up to August of 2020.

Over the same period in 2020, there were 28 fentanyl deaths, which indicates an increase of 125 percent.

In San Diego, there have been 203 fentanyl-related deaths in the first six months of 2020, the U.S. Drug Enforcement Administration reported.

By comparison, there were 152 fentanyl-related overdose deaths in San Diego County in all of 2019.