The emergence of a new, drug-resistant strain of malaria in Southeast Asia has triggered concerns of a possible worldwide crisis.

Doctors and researchers are asking the World Health Organisation (WHO) to start a state of emergency in the region, because they fear it could spread to more vulnerable areas, like Africa.

The fear is that this will trigger a global crisis as millions  will be introduced to the new resistant strain of the parasite and this could lead to a sudden hike in infections.

Scientists are currently holding out for a cure in the hopes of limiting the virus to Southeast Asia.

Public health officials recorded the presence of the new strain of the Plasmodium falciparum malaria parasite in their study published in the October issue of The Lancet Infectious Diseases.

The malarial parasite is transmitted by mosquito, typically from the Anopheles genus. The terrain in Southeast Asia makes dealing with the threat difficult 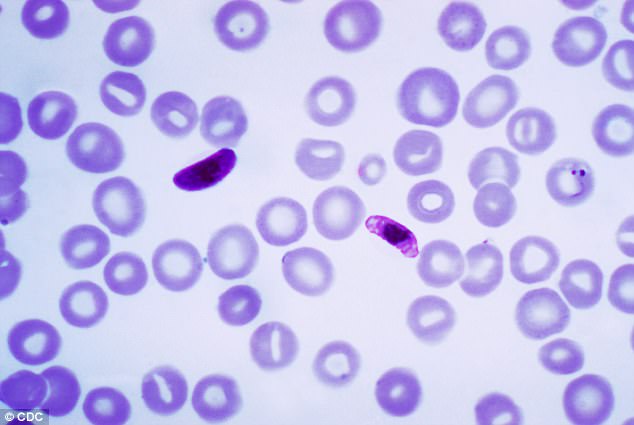 A new, drug-resistant strain has cropped up in Southeast Asia and is causing problems in the region

This deadly variation of malaria affects many countries in the region: like Cambodia, Thailand and Laos.

The parasite is of particular concern because it’s resistant to the typical drug combination currently in use: a mix of artemisinin and, usually, piperaquine.

Artemisinin is a very potent malaria treatment that is flushed out by the body relatively quickly. Piperaquine sticks around a bit longer and finishes off any remaining parasites.

In the past, P. falciparum has developed a resistance to widely adopted drugs.

In the 1950s and 60s, it was Chrloroquine, and the resistant strain also originated from Southeast Asia. Resistance to a blend, of sulfadoxine and pyremethamine, also caused problems for malarial experts.

Scientists are in a constant battle with malaria as they innovate new drugs to combat the parasite, and repeat the process every time it develops a resistance to them.

‘If this gets to Africa, it’s going to be catastrophic’

There is a particular concern that this drug resistant strain could spread to Africa, where the parasite is endemic and the people there are more vulnerable. Currently, 3,000 children each day are killed each day by malaria, despite the use of the current drug blend.

HOPE FOR A NEW MALARIA VACCINE

A powerful new malaria vaccine could be on its way after scientists found it was a success during a small trial.

Four of eight monkeys that were given the injection were completely protected from the deadly blood disease.

The modified jab, based on another experimental drug, fought off the tropical infection for nearly a month in three other apes.

Only one monkey fell victim to the virus passed on by a mosquito that causes the most serious form of malaria.

These anopheles mosquitoes are believed to kill in excess of 440,000 people each year as a result of passing on the virus.

The vaccine works by using a combination of two proteins – which better mimic the disease-causing parasite itself.

Researchers from the National Institute of Allergy and Infectious Diseases say their findings show the need for human trials.

‘If this gets to Africa, it’s going to be catastrophic,’ Dr. Christopher V. Plowe told the New York Times in an interview. He is a malaria expert at the University of Maryland School of Medicine.

Holding back the parasite in such a notoriously difficult territory as Southeast Asia, however, will be difficult.

The thick jungles make it not only difficult to conduct survey work, but provide the perfect breeding grounds for the mosquito which harbours the parasite.

Because of this, many medical practitioners feel hopeless about the possibility of preventing the spread.

However, some researchers are holding out for yet another cure.

Currently there are two drug companies, Sanofi and Novartis, who claim to have made a lot of progress with new treatments. It’s thought these could be in use by 2023.

An emergent crisis, for example if the strain reaches Africa, could push that date dramatically forward, for instance to 2020.

Some scientists are calling for World Healthcare Organisation (WHO) to declare a state of worldwide emergency, due to the appearance of this strain and the ubiquity of the drug it’s resistant to.

‘Why are people so reluctant to call it that?’ asks Dr. Lorenz von Seidlein while speaking to the New York Times: a researcher at the Mahidol unit in Thailand and who previously worked in western Africa.

The sheer number of drugs in development, he says, has created a sense of overconfidence. There remains the possibility that these new drugs might fail.