High and dry: ‘Drug smugglers’ are rescued after using ‘packages of COCAINE’ to stay afloat when their boat sank off of Colombia

Suspected drug traffickers had to be rescued from the ocean while floating on packets containing 1.2 tonnes of cocaine after their boat sank off the coast of Colombia.

A Colombian navy vessel spotted the desperate men clinging to packages in the Pacific Ocean, 30 nautical miles off the coast of Tumaco.

Three men were thought to be in the water for at least three hours surrounded by the bundles, reportedly of cocaine, which were wrapped in black packaging.

The stranded men were using the huge bricks to stay afloat after their boat sunk when it was hit by a wave, according to local media.

The three men were rescued when life rings were thrown to them and the trio were given medical attention as they had been floating for hours.

Video footage of the men in the water was recorded by rescuers and showed the moment they were pulled from the ocean.

Authorities reportedly confirmed the packages contained 1.2 tonnes of cocaine and the three men were arrested and detained. 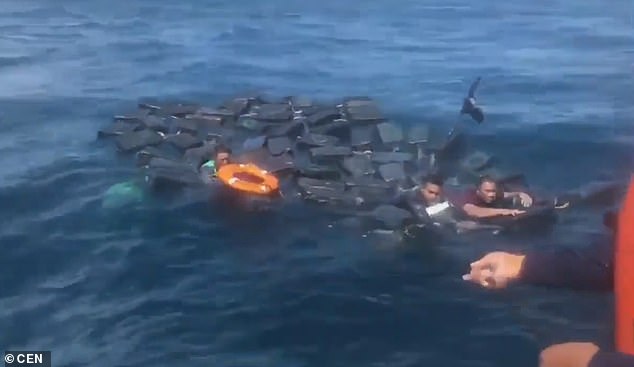 According to Colombian media the men are to be ‘prosecuted for the trafficking, fabrication and handling of narcotics’. It is unclear if they have been charged at this stage.

Reports also state one person who was on the boat was not rescued in the operation and the navy are continuing to search the area.

The Colombian Navy has reportedly seized 163 tonnes of cocaine so far this year. 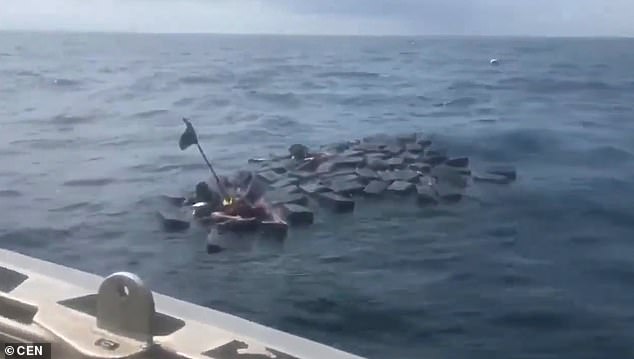 The Colombian navy rescued the men and they were arrested. A fourth man who was reportedly on board is thought to still be missing