Drugs may one day be delivered by ROBOTS we swallow

Drugs may one day be delivered by robots you SWALLOW: Scientists create a ingestible gadget that swims through the body to diseased tissue

Drugs could be delivered by microscopic, shape-shifting robots you swallow in the future, scientists believe.

Researchers have created the tiny gadgets, which are around 5mm in length and can navigate the narrow channels of the human body.

The tiny robots, developed by Swiss researchers, even change shape and speed as they travel through bendy blood vessels and thick bodily fluids.

Drugs may one day be delivered by microscopic robots (pictured) we swallow. The gadget travels to exactly where it is needed in the body and is controlled by an electromagnetic field 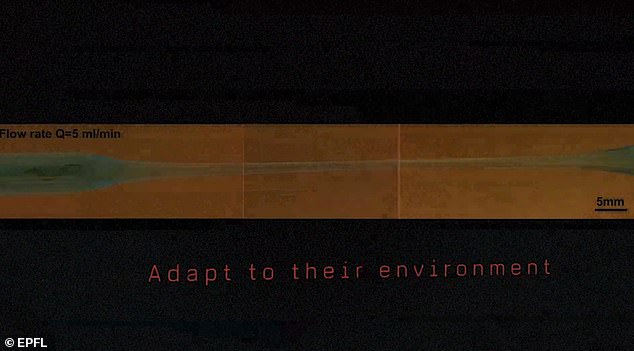 When tested in the lab, the robot adapted to squeeze through narrow tubes. This suggests it would be able to change shape according to its environment, like in narrow blood vessels

The robots, which are yet to be named, are made up of a gel that responds to heat, with added magnetic nanoparticles.

This allows them to be controlled by an electromagnetic field, the authors wrote in the journal Science Advances.

To make the robots move effectively, inspiration was drawn from bacteria, which get from place-to-place via a propeller-like tail known as a flagellum.

This was mimicked to create an ‘oar-like’ extension from the nano-robot, to allow it to swim through the body.

‘Nature has evolved a multitude of microorganisms that change shape as their environmental conditions change,’ Dr Nelson said.

When tested in a sucrose solution ‘with a similar viscosity to blood’, the robots ‘moved much faster compared to other prototypes’, the authors wrote. 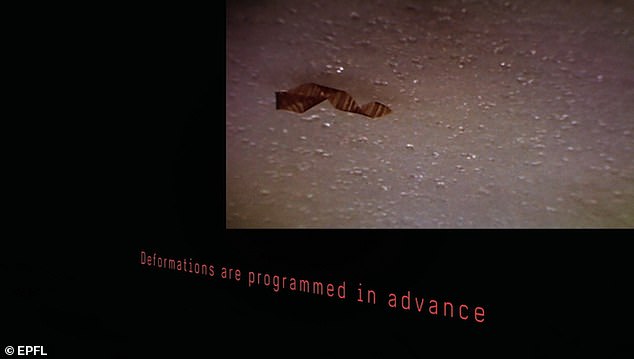 The robot has a cylinder-shaped ‘tail’ that helps it propel forward, like bacteria have 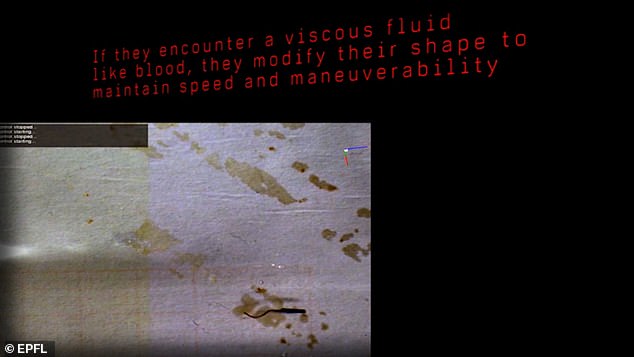 Pictured is the robot in a sucrose solution with a similar viscosity to blood. It ‘moved much faster compared to other prototypes’, suggesting it can adapt to different bodily fluids

They also changed shape to squeeze through glass tubes with lots of bendy passages, before reverting back to their original size.

The robots must be highly flexible if they are to travel through narrow blood vessels and dense fluids at high speeds.

‘Our robots have a special composition and structure that allow them to adapt to the characteristics of the fluid they are moving through,’ said Professor Selman Sakar, one of the researchers.

‘For instance, if they encounter a change in viscosity or osmotic concentration, they modify their shape to maintain their speed and maneuverability without losing control of the direction of motion.’

Changes to the robot’s shape can be ‘programmed’ in advance to maximise the robot’s effectiveness without the use of bulky sensors or machinery.

They can then be controlled by an electromagnetic field or left to navigate their own way through the body by following fluid flow.

Either way, they automatically mould into the most efficient shape.

The researchers are working on improving how the robots swim through different fluids in the human body.

If studies are successful, they believe the gadgets will be relatively cheap to produce.

A scientist has warned AI will eventually make doctors ‘obsolete’.

Dr Goldhahn – from ETH Zurich – also argues robots may help overcome healthcare funding shortages due to them being cheaper to hire and train than humans.

But while Dr Vanessa Rampton acknowledges AI may be a useful aid to medics, she argues it will never completely replace human healthcare.

‘Computers aren’t able to care for patients in the sense of showing devotion or concern for the other as a person, because they are not people and do not care about anything,’ Dr Rampton, from McGill University, said.