Michael Greene, 59, allegedly headbutted a female police officer at the Melbourne Cricket Ground on Saturday as he was being escorted out for being too intoxicated.

Police are believed to have removed Greene from male bathrooms at about 5pm after complaints from other spectators.

Witness Annie, who asked her full name not be disclosed, said Greene senior was screaming at the top of his voice.

Police surround Michael Green outside the MCG on Saturday. They placed him next to a sign outlining the ‘conditions of entry’ which allegedly Greene breached with gusto 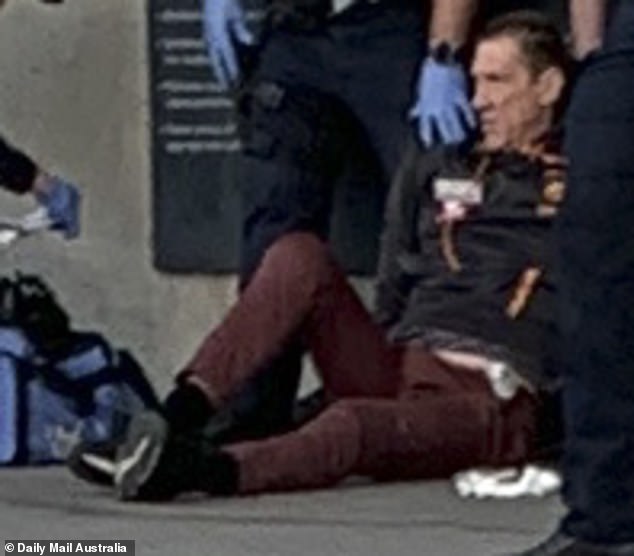 ‘I reckon at least eight officers had to barricade him from the crowd while they went through his bag. He was just so agitated.’

Annie said the clearly intoxicated Greene was held at bay for up to 15 minutes while police worked to get a van onto the concourse to evacuate him.

‘It took four police to actually get this guy into the back of the van. I had no idea it was Toby Greene’s dad and I just thought it was a completely drunk man … and I was thinking “what a waste of police resources for one person”,’ she said.

Police spent up to half-an-hour searching Greene’s possessions and instructed the irate boozer to keep his mouth shut, Annie said.

‘It was just so in your face. The police did an amazing job because I just feared this may turn ugly, especially with GWS losing, but they did contain the situation well,’ she said.

Daily Mail Australia can reveal police were perhaps wise to deal with the drunken Greene elder in greater numbers.

A search of his criminal history shows the troubled father has struggled to remain on the straight and has more than a dozen prior convictions.

Prior charges include assaults, stalking, thefts and multiple driving offences, including drink-driving and driving while disqualified.

He has also previously been convicted of resisting arrest in 2004 when he received a community based order and made to undertake a sex offenders program to deal with his stalking offences.

Previous court orders state he is suspected of suffering from schizophrenia and has fought drug addiction for years.

Greene and his 26-year-old son are understood to be estranged from each other and haven’t had a solid relationship in recent years.

Victoria Police confirmed a 59-year-old man was removed from the ground after he allegedly headbutted a female officer. 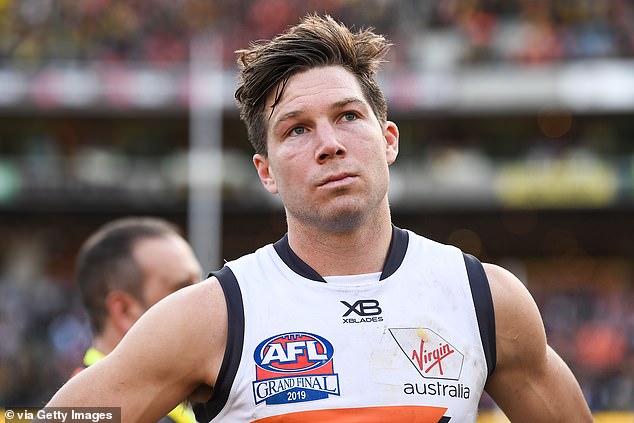 He was charged with intentionally causing serious injury, assaulting and resisting police.

He appeared in court on Sunday dressed in a blue shirt over what appeared to be an orange footy jumper.

While in custody he needed Valium and suboxone, which is used to treat opioid addiction, Greene’s lawyer told the court.

Greene did not apply for bail and was remanded to appear at the Ringwood Magistrates’ Court next month.

Toby’s finals campaign was difficult at best prior to his dad’s arrest.

The half-forward’s 20-year-old cousin Finley took his own life in June, as the GWS star and his team worked toward qualifying for their first Grand Final appearance. 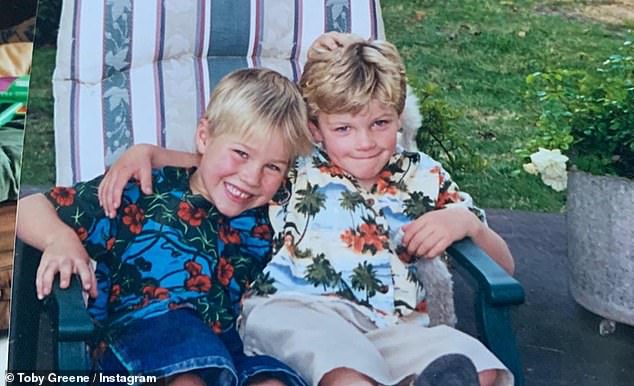 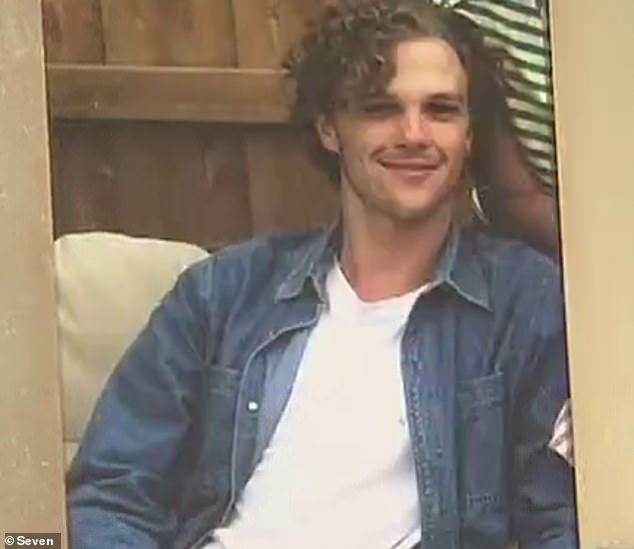 Toby was going to dedicate the premiership to his late cousin if his team were able to topple the Tigers.

Instead of her son, it was Ms Greene’s ex-husband who made headlines for his alleged performance at the MCG on Saturday.

Toby previously said his parents separated when he was five or six, but that both his parents tried their best to raise him.

‘I don’t think I had a difficult upbringing,’ he told The Herald Sun in 2017.

‘Mum and dad were pretty much the complete opposite. Mum was a really good mum. I went to a private school, got a scholarship to Wesley and that was lucky, and dad sort of had some troubles growing up.

‘He’s still a good dad, but he couldn’t control himself sometimes I guess.’ 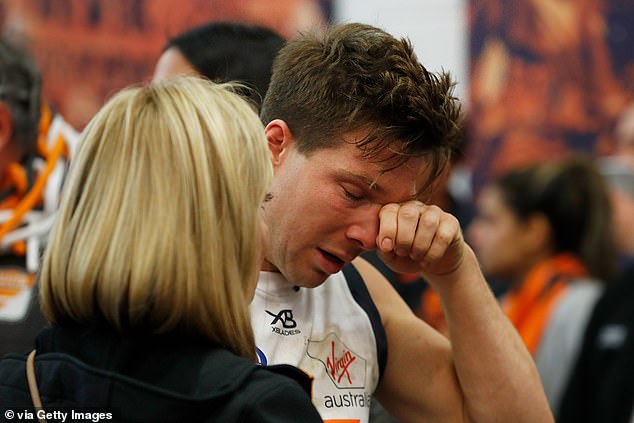 Toby acknowledged he and his dad had some difficult and sometimes terse interactions growing up – particularly when his father was intoxicated.

But he said his father’s heart was always in the right place.

‘He is one of the nicest guys you’d ever meet. If you ask all my mates, he always looked after us really well, he just let so much go. He’s really caring, really understanding, but he’s just put his body through too much,’ he said.

A spokeswoman for the GWS Giants refused to comment on the matter allegedly involving Toby’s father.

Greene was one of 43 people who were ejected from the Grand Final on Saturday. 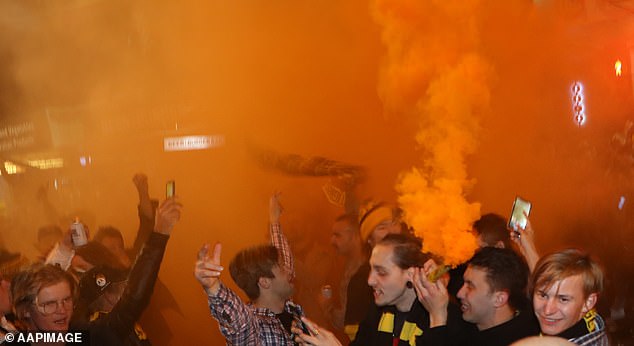 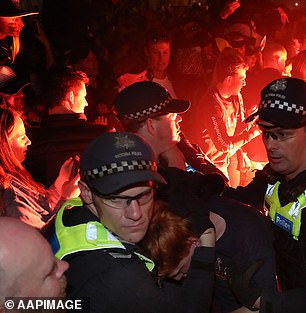 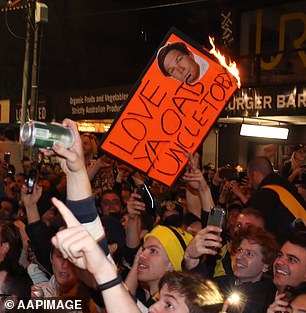 A 21-year-old allegedly bit an officer, who required treatment in hospital after the attack, while a 27-year-old was charged with hitting an officer on the back of the head.

A further six people were arrested during post match celebrations. 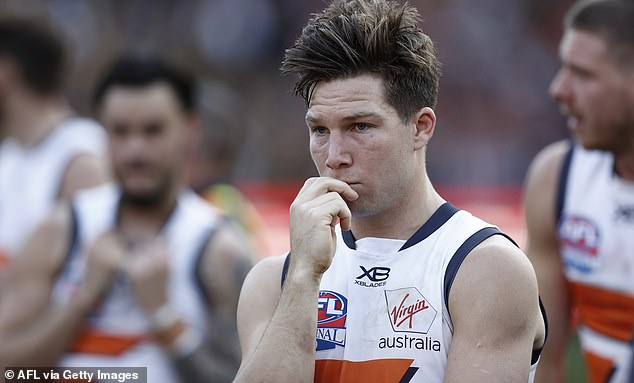