A schools admission officer kicked a constable in the groin during a violent rage in a departures lounge after being told she was too drunk to fly for her dream 50th birthday break.

Grandmother Alison Yorston got intoxicated on Prosecco while waiting to board an Emirates flight to Dubai for what she called ‘the holiday of a lifetime’ with her daughter.

Cabin crew refused to let her on the aircraft after she stumbled toward Gate 12 at Manchester Airport in high heels and was the last passenger to arrive.

Later as the company director’s wife was waiting for her baggage to be taken off the holiday jet, police had to be called when she began pushing and prodding ground crew, screaming: ‘They’ve ruined my holiday – I’m going to board that f****** plane’.

Yorston, 50, flailed her arms around wildly and warned intervening officers that her brother in law was a police sergeant before kicking a constable in the groin.

During a struggle, she fell to the concrete floor in a drunken stupor, breaking her right arm to break in three places.

Police body cam audio footage taped Yorston as she ranted: ‘This was a special present for me. Why you f****** breaking my arm? Don’t f****** touch me.

‘Why are you breaking my arm? I will f****** see him. What’s your number? It was not an accident, oh my God, there was no accident. The police officers broke my arm. I’m asking for your number because you broke my f****** arm.’ 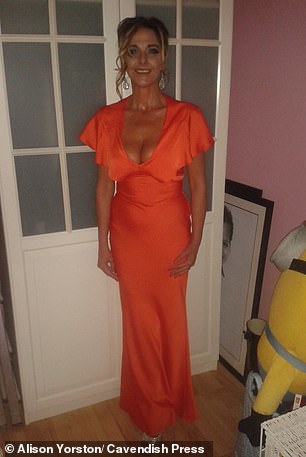 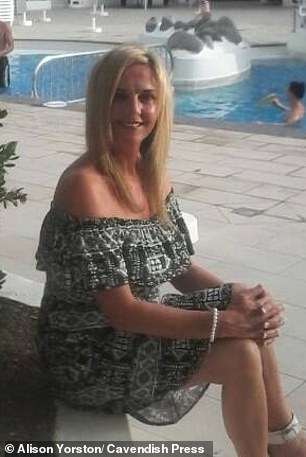 The admissions officer (pictured) has been placed on tag and is under curfew following her violent, foul-mouthed rage at Manchester Airport where staff refused to let her board a plane

Yorston, from Sale, appeared in the dock at Manchester Magistrates’ Court yesterday with her arm in a sling and wept as she was ordered to wear an electronic tag after admitting common assault and a public order offence. She was convicted of a third charge of assaulting a policeman following a trial.

She was sentenced to a six-month community order, must wear the tag under the terms of a 7pm-7am curfew and was also ordered to pay £735 court costs. It is thought she is about to lose her employment at a local high school.

The 8.30pm incident took place on June 1 last year after Yorston was about to go on the dream holiday to Dubai with her daughter and grandson after the trip was gifted to her as a 50th birthday present from family and friends.

Prosecutor Richard Stone said: ‘She had some drink before she went to the airport and whilst in the departures lounge she and her daughter shared a bottle of Prosecco. When it came to boarding the plane, staff refused to allow her to board.

‘She was one of the last passengers and staff found her behaviour to be aggressive and asked for her bag to be taken off the aircraft. A number of the members of staff noticed that when she arrived she stumbled about and the crew directed her to the baggage reclaim area. Her family stayed on the plane.

‘Once Mrs Yorston was removed from the flight, she became aggressive and started to kick at the ground staff and said it was her 50th birthday and she said the airline staff had ruined her holiday. She spent a few minutes remonstrating and called the staff: “f****** d****”. 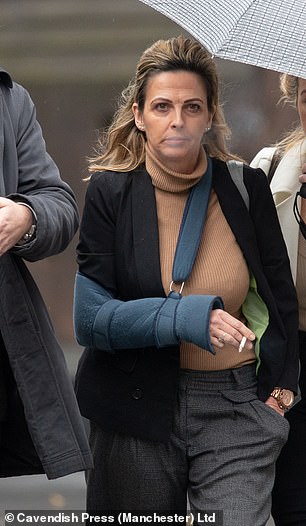 ‘As the ground staff tried to move her, she began prodding, poking and pushing at them. She was telling them: “I’m going to board that f****** plane.”

‘When the police got to the area and approached her, she started redirecting the abuse to them. She was trying to make a phone call when one police constable approached her, took hold of her right wrist in an attempt to calm her down, but she lashed out.

‘She kicked out towards the PC kicking him in the groin area and as a result she was taken to the floor. During being taken to the floor, the officer still had hold of her arm when the arm was broken in three places quite severely. The medical crew were called to assist her.

‘During her interview, Mrs Yorston stated she had shared a bottle of Prosecco before going to the gate, she said she was 5 on a scale of one to 10 of how drunk she was. She said she was wobbling due to the shoes she was wearing.

‘She has admitted to swearing and being abusive and being concerned with prodding and pushing staff. She said it was the police who were attacking her.

‘She said she was on the phone to her daughter when the police stopped her. She said it was not her intention to hit the officer, she was just kicking out. She may not have known the intention but the act was reckless in doing so.’

Giving evidence, PC Martin Sharrocks said: ‘There were three to four members of staff and a female who was staggering around and waving her arms and shouting abuse. She was using quite a few F words.

‘She was shouting something along the lines of “it’s the f****** police” or words to that effect. She then sat down on the seats and sat on her phone. I became aware she had been offloaded and one of the airline staff said “other than slap me a few times” so I believed he had been assaulted. 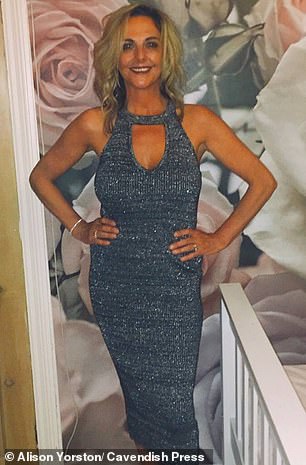 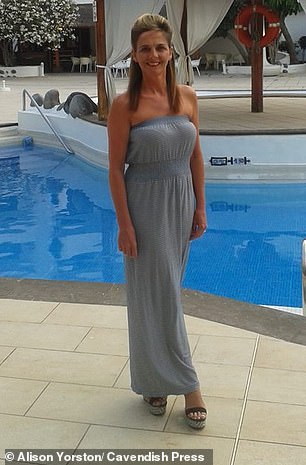 ‘I approached Miss Yorston but she was irate, swearing and screaming ‘f*** off’, then she started using her phone and dialling trying to make a phone call. She was drunk and there was a very strong smell of alcohol that I could smell a metre away. I approached her initially as we needed to calm her down and I wasn’t intending to arrest her.

‘I then took hold of her arm and took her phone off her to calm her down for her own safety and everybody else. But she was waving her arms around and threatening and shouting abuse at other people around.

‘She was telling me to “f*** off” and she said something about informing her brother in law as he was a Police Sergeant and she said he was going to “f*** me over”.

‘I had hold of her right arm and I was sat in front of her. I was trying to explain that she wasn’t getting into that flight and that I didn’t want to arrest her and I kept telling her to calm down.

‘At this stage, I don’t know how it happened but she managed to go towards me and either pushed or kicked me away and in doing so, I was impacted on my inner thigh into my testicles. She was then going to be arrested, I didn’t have any other option. I then shouted ‘on the floor’.

‘I don’t know whether she lunged forward or slumped forward but she went to the floor. At the time it seemed she wasn’t aware of her arm breaking and she continued to abuse us and told us to get off her.

‘But at this stage I knew the arm was damaged and we needed medical assistance. We tried to keep her still as she was kicking out so we put her in leg restraints.

‘We told her that her arm was broken and she started shouting “you’ve broke my f****** arm”. I did try to speak to her as I approached her. I didn’t go in guns blazing. I had been told she had been slapping the staff.’

PC Amy Barratt, a Counter Terrorism Officer at Manchester Airport added: ‘She was shouting and swearing and waving her arms excitedly at staff.

‘She was saying something along the lines of “you f****** d**** have ruined my holiday” and then she mentioned it was something to do with her 50th birthday. She was waving her arms and making contact with staff. There were a few scratches.

‘She was angry and aggressive and her arms were going everywhere. Pc Sharrocks was trying to reason with her. She was not happy.

‘She had high heels on and kicked out at him making contact. He said to her “that really hurt”. She was constantly swearing and telling us to get off and saying how she had done nothing wrong.

‘Then her whole body lunged forward and we fell to the floor. I heard a loud snap, it sounded like a pair of glasses breaking.’

Yorston said: ‘I was due to fly to Dubai for my 50th birthday with my daughter and my grandson. I had a wine and soda whilst getting ready and I shared a bottle of Prosecco with my daughter but I didn’t consider myself to be drunk.

‘My reason for stumbling was because I was wearing high heeled shoes and I was unsteady whilst walking. I admit I was abusive towards staff and I prodded them but I was very upset and emotional as I couldn’t go on the holiday of a lifetime, it was a gift and contributions from family and friends. I felt let down and disappointed.

‘Now I feel ashamed, it’s not in my character to be like that and I have apologised for my behaviour. The officer approached me and grabbed me by the arm and then grabbed my wrist but he didn’t explain why he was doing this to me, he was aggressive and forceful.

‘I was just waving my arms about saying: ‘what’s going on, why am I in this position?’ I didn’t kick out and I didn’t lunge. After that there was a bit of commotion and I heard a crack and I was on the floor. I was taken to hospital and told my elbow was snapped in three places.

‘I was annoyed, emotional, upset and in excruciating pain. I had to have two surgeries.’

She added: ‘I told my family to go, I didn’t want them to stay with me. The staff didn’t want me to get on the plane because I couldn’t walk in my heels. I wasn’t going on holiday and that was a normal reaction. I wasn’t drunk, I was angry and upset. I was annoyed when the police turned up. I didn’t want anything to do with them.

‘There probably was a red mist and I probably wasn’t listening. I don’t agree that my own actions let to my misfortune, there was somebody else to blame for my injury.’

Her lawyer Paul Shepherd said: ‘She is currently off work sick, she hasn’t been able to work and her employment is coming to an end. She has no alcohol or drug issues. This was totally out of character for her.’