A Florida man has been caught on video choking out a Lyft driver while the car was still moving, causing the motor to cross a median and put multiple other lives in danger.

Travis S. Smith, 36, is seen in dashboard footage ripping down a plastic screen erected to help protect the driver amid the coronavirus outbreak and placing him in a choke hold in the early hours of Sunday morning.

Smith’s friend, Andy Kastl, is heard encouraging the attack and Kastl’s seven-year-old son, who was accompanying his father on a visit from Maine, is heard crying.

The clip shows Smith striking up a conversation with the 47-year-old victim.

Travis S. Smith, 36, is seen in dashboard footage from Sunday ripping down a plastic screen erected to help protect the driver amid the COVID-19 outbreak 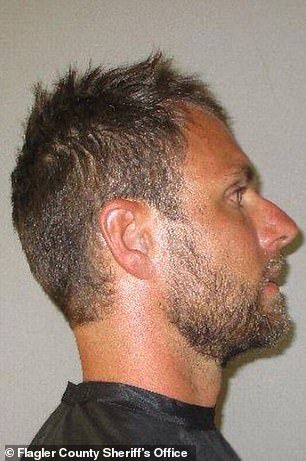 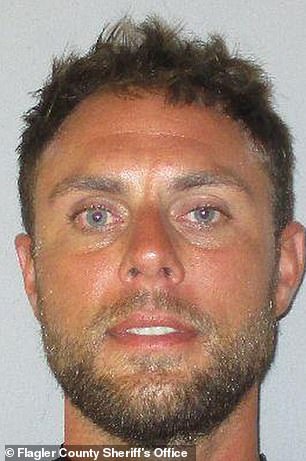 Travis S. Smith, 36, was arrested and charged with Battery and Child Abuse as he put the young passenger’s life in danger

‘How did you seal that up … like, you did that yourself?’ Smith asks about a sneeze screen.

‘Yeah, I did it myself,’ the driver responds, explaining that he purchased it from eBay.

During the conversation Smith calls the driver a ‘liar’. When an indication light comes on at the back of the vehicle, the driver asks: ‘Did you open the door man?’

However Smith responds: ‘Nope, nobody has opened the door.’

Smith then carries out the attack, yanking the man’s head back and his friend appears to say: ‘Get that ‘motherf***er.’

At the same time the friend jumps out of the vehicle, grabbing his crying son and encouraging Smith to get out.

As the driver gets out and yells for witnesses to call police, the car is seen rolling away.

By the time police from the Flagler County Sheriff’s Office (FCSO) responded to the intersection of Belle Terre Parkway and Royal Palm Parkway after receiving calls regarding a fight in the street, Smith was on top of the driver restricting his movement. 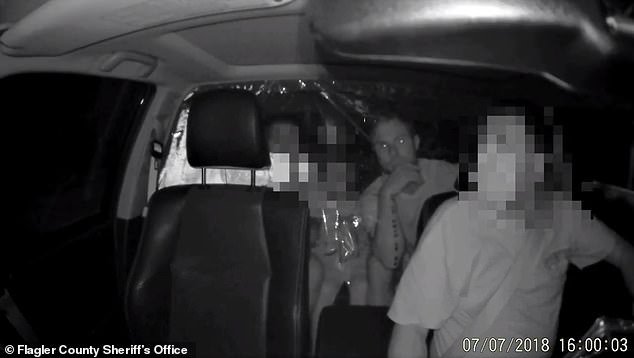 ‘How did you seal that up … like, you did that yourself?’ Smith asks about a sneeze screen. ‘Yeah, I did it myself,’ the driver responds, explaining that he purchased it from eBay 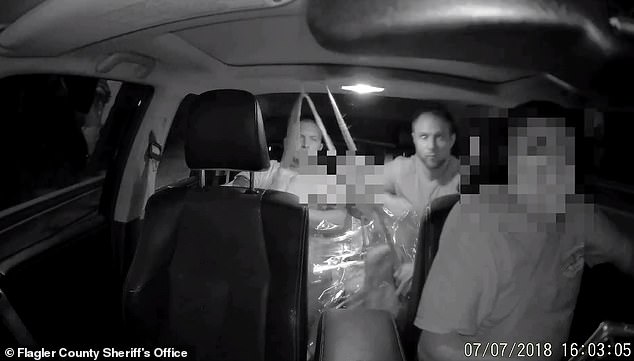 Deputies ordered Smith to get off of the driver and Smith responded: ‘You ready for him?

Cops conducted individual interviews to determine what had occurred but Smith, who was visibly intoxicated, lied about the encounter.

Smith claimed the group was traveling home from Flagler Beach when the Lyft driver began driving recklessly. He claims he grabbed the driver and forced him to pull over in order to protect himself and his friends.

On the other hand, the Lyft driver told deputies that Smith suddenly attacked him while he was driving, causing him to lose control of the vehicle. He said the two exited the vehicle with the car still in drive and began to fight in the street while the driver called out for passersby to contact police.

The driver also said Smith spat on him and cops notice spit beneath his eye.

The driver told deputies that he has a dash camera in his vehicle that records the interior as well as the road.

Deputies reviewed the footage which corroborated his story.

Police asked Smith to give his friend and son access to his home as they were visiting from Maine however he refused to give them a key and replied: ‘Go fuck yourselves.’

Deputies gave the other passenger and his child a courtesy ride to a local hotel after the boy told cops: ‘I just want to go to sleep.’

The Lyft driver suffered minor injuries during the altercation, including a hematoma on the side of his forehead. 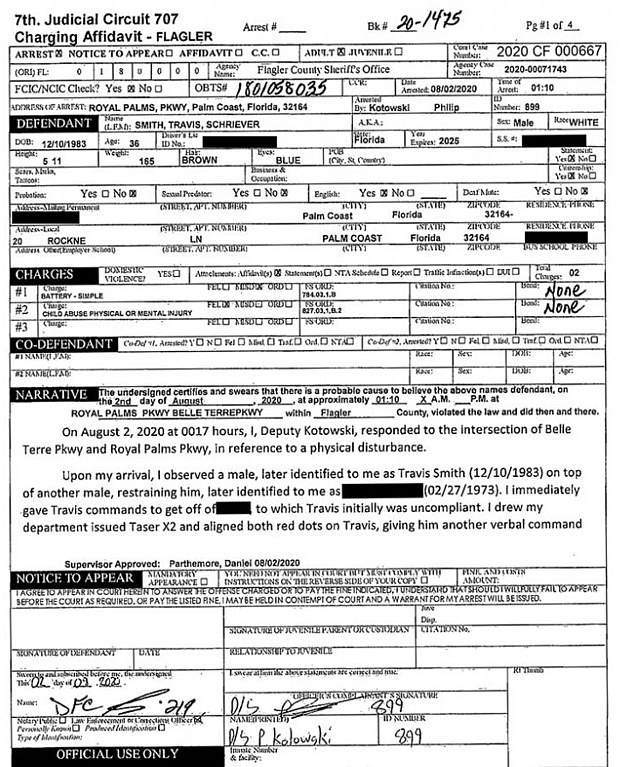 Smith was found of top of the driver when cops arrived at the scene. He was booked into the Sheriff Perry Hall Inmate Detention Facility and released after posting a $7,500 bond

Smith was arrested and charged with Battery and Child Abuse, due to putting the child’s life’s in jeopardy during the attack in a moving vehicle.

‘This was a very dangerous situation for not only the people inside the vehicle but for the other motorists on the roadway,’ Sheriff Rick Staly said.

‘This drunk attacked an innocent driver and put numerous lives in danger. These rider-share services can quickly become dangerous and drivers should be cautious of who they let in their vehicle. Thankfully the video recording device captured the entire incident and he went to jail.’

Smith was booked into the Sheriff Perry Hall Inmate Detention Facility and released after posting a $7,500 bond.

‘Earlier this month, Lyft began providing partitions to frequent drivers, as well as those in our Express Drive rental program,’ a statement on the company website reads.

The driver in the video didn’t appear to be using one of theirs however.