Drunk man, 38, sent ‘humiliating’ video of him and woman having sex to her boss jailed

A court heard John Davison, 38, from Gateshead, drank vodka and took sleeping pills in a suicide bid before sending the explicit clip via Facebook to three people including the woman’s employer.

It came two weeks after he wrecked her Selby home, smashing her belongings after the pair rowed in a pub.

Alisha Kaye, prosecuting, said the woman was ‘humiliated and upset’ over having to discus the matter at work.

She said: ‘It was a horrible incident and affected her, her family, friends and at work.’

Davison’s barrister Brooke Morrison said he had no idea he had sent the videos because at the time he had been drinking vodka and taking pills in a suicide bid.

‘He remembers nothing from this point until he was woken up by the police knocking on his door 24 hours later,’ she said.

Judge Simon Hickey described the video of Davison having sex with the woman as ‘disgusting material’.

‘This sentence must send a message to the public that sending this type of material will not be tolerated,’ he told York Crown Court. 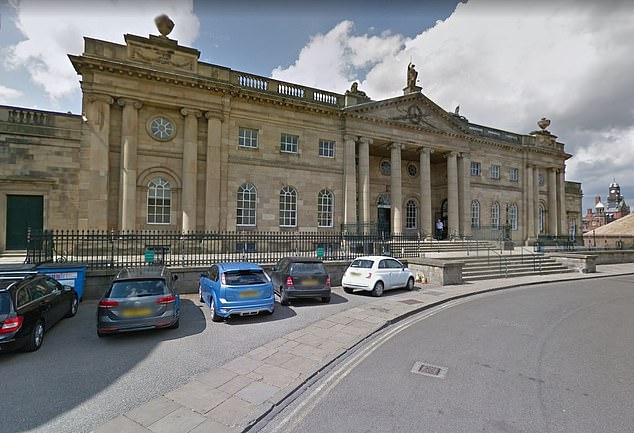 He was jailed for eight months and banned from contacting the woman or going near her home for five years.

Miss Kaye, prosecuting, said Davison had accompanied the woman and others home after they had been talking together in a pub.

The pair’s relationship was short-lived but the court heard that Davison and the woman, who live 200 miles from each other, had more than a ‘one-night stand’.

In the house, he threw bottles at the woman’s television and other items, the court heard.

Sixteen days later, a second woman alerted the first that she had received photographs and a video from Davison at 8.30am.

The first woman asked Davison not to send it to others, but he was abusive to her.

Miss Morrison said Davison had been going through a difficult period because members of his family had been ill and his mental health had suffered.

He is ‘genuinely remorseful’, she said.