A Russian cargo ship captain may have been slightly drunk when he veered off course and crashed into a busy South Korean bridge this afternoon.

The 6,000 ton Seagrand collided with the side of the Gwangan Bridge in Busan, in the southeast of the country, at around 4.20pm local time.

The ship then attempted to turn and vacate the area before it was detained by the Korea Coast Guard (KCG).

The Russian cargo ship Seagrand bumped into the side of the Gwangan Bridge in Busan, South Korea on Thursday with a ‘drunk’ captain on-board

KCG officials said the captain’s blood alcohol level was 0.086 per cent – almost three times the legal limit of 0.03 per cent.

According to local news agency Yonhap the Seagrand also hit a moored cruise ship just 40 minutes before the accident.

Authorities said they spoke to the cargo ship’s crew and were still determining whether the captain, whose identity has not been released, was at the helm at the time of the crash.

Drinking alcohol on-board is perfectly legal so as long as the person is not steering, the KCG said. 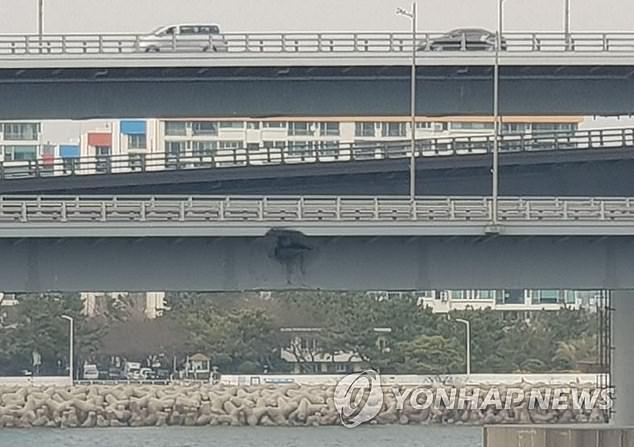 The accident caused some superficial damage to the lower level of the bridge, but no injuries were reported

Officials are also looking into why the vessel was in the waters near the £500 billion Gwangan Bridge – South Korea’s second longest – when it should have been heading in the opposite direction.

According to the KCG, the Seagrand arrived in Busan around 9am on Wednesday morning to unload 1,495 tons of iron pipes.

It departed for Vladivostok, Russia on Thursday with 1,415 tons of steel coils.

No injuries were reported, but a section of the bridge was closed off for a safety inspection.

Photographs show some superficial damage to the lower level of the two-tiered structure.