Drunken neighbour who threatened to ‘slice up’ residents faces jail

A drunken neighbour is facing jail for threatening to ‘slice up’ residents in a foul-mouthed tirade outside his home after downing seven pints.

Timothy Coldwell told them: ‘I am going to kill you all’ after returning to his flat in Solihull, West Midlands, following several days away to find police had been inside.

He unleashed a torrent of swear words inside the property before punching the walls.

He dismissed the claims as ‘twaddle’ as he stood trial at Birmingham Magistrates’ Court.

But the 53-year-old was convicted of two counts of using threatening or abusive words and behaviour with intent to cause fear on July 3.

It was also revealed Coldwell had pleaded guilty to one charge of arson after setting fire to a 30ft conifer tree in the communal garden, owned by Solihull Council on June 30.

Jeanette Stevenson, prosecuting, said Coldwell flew into a rage after finishing his drinking bender and returning to his council flat.

Ms Stevenson said neighbour Peter Felton told Coldwell that police had been inside following concerns someone had broken in and the keys had been taken to a police station.

He unleashed a torrent of expletives inside his flat before punching the walls.

She said: ‘I was hearing a lot of shouting and banging and became concerned for Peter.

‘I saw him (Coldwell) and asked what was wrong.

‘He said: ‘The state of my flat when I came back was a mess.’

‘He was getting very angry and started shouting and swearing. He then said: ‘I am going to kill you all’. I felt terrified.’

Resident Stephen Fisher told the court: ‘He was shouting: ‘I am going to slice people up. I am going to kill people’. 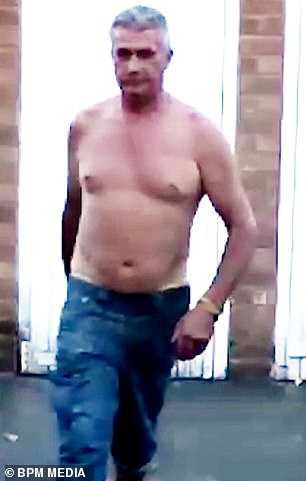 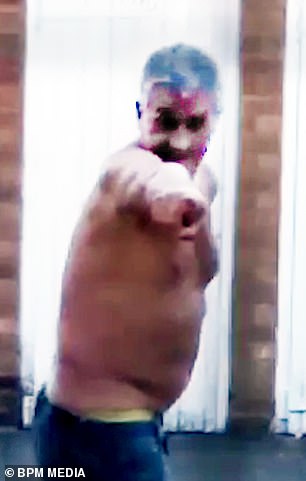 ‘I believe from his demeanour he had been drinking.’

Giving evidence, Pc Jessica Whitehurst said: ‘He was angry and had a clenched fist.

‘He kicked something, maybe a bag at my colleague Pc White.

‘He was shouting, saying police had left his flat in a mess. He was spitting and was aggressive so we handcuffed him and arrested him.’

Coldwell told police he couldn’t remember anything because he had been drinking.

But, giving evidence in court, he claimed he could recall the incident and admitted to having seven pints during the day.

He told the court: ‘It is all a load of twaddle.

‘I had been drinking but I remember everything that happened.

‘I came back to watch the England game but I did not say those things. It did not happen.’

District Judge Jan Jellema found him guilty of both charges.

It was also revealed he had pleaded guilty to assaulting a constable in the execution of his duty by kicking an officer.

The judge said: ‘I want to find out more about the defendant before sentencing him so I want a pre-sentence report to be prepared.

‘I am looking at the possibility of handing out a criminal behaviour order and all sentencing options will be considered, including custody.’

Speaking after the case, resident Mr Fisher, who filmed a bare-chested Coldwell pointing and ranting at him in June, said: ‘We have been putting up with Mr Coldwell’s anti-social behaviour for years.

‘This includes ripping out shrubs in the communal garden while shouting obscenities at the council and lying drunk in the middle of the road with cars driving around him.

‘We are all relieved he has been convicted.’