When the flouro rabble retired to their Woodstock bourbons in front of the TV on Tuesday night, they were probably pretty proud of themselves.

By the end of the day they had caused chaos across Melbourne and made monkeys out of Victoria Police once again.

The sun was about to set when the militant remainders of the mob returned to CFMEU headquarters.

Hard day on the tools: A protester shows his colours on Tuesday in Melbourne 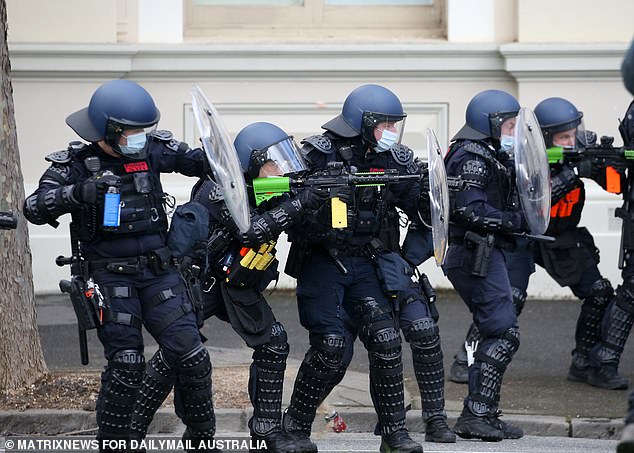 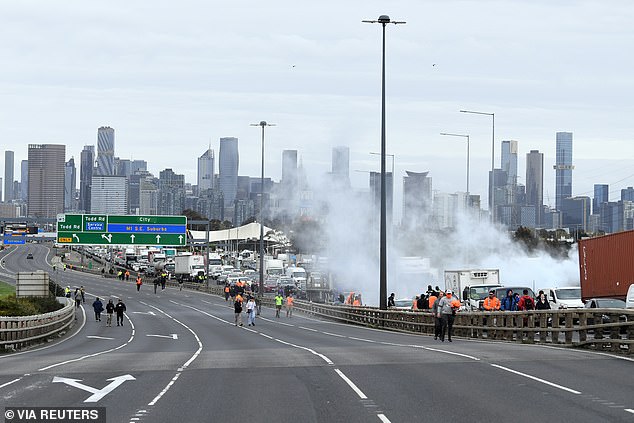 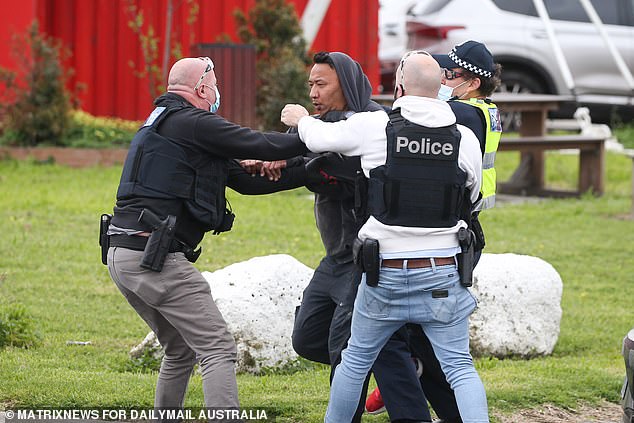 Police appeared to make one of a hand full of arrests on Tuesday. This one was on the West Gate Freeway at rush hour

They’d been on the march since 10am, waltzing up and down the CBD like they owned the place.

And for the day, they effectively did.

Sucking down cans of Canadian Club and some other berry concoctions, they sent home their point to Victorian Premier Daniel Andrews and their own leader, John Setka, that they controlled the state.

Somehow police had let them march all the way to the top of the West Gate Bridge to take part in a sing-a-long of Daryl Braithwaite’s ’90s hit The Horses.

It was totally bizarre.

As the protesters marched towards the bridge, a motorcyclist sped up and down in front of them pulling monos on the wrong side of the road.

He sped off without so much as a glance. 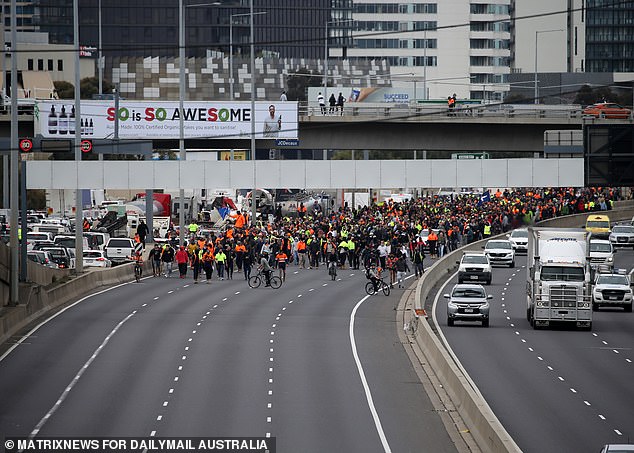 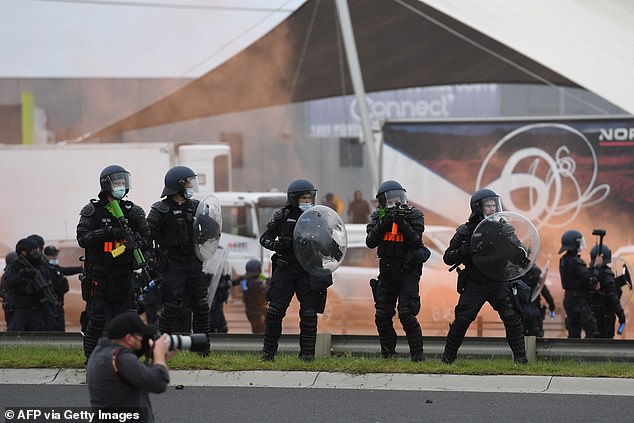 Police decided to take their last stand on a busy freeway during pandemic rush hour.

Tradies on scooters and bicycles literally rode circles around police cars as they crawled in their cruisers ahead of the mob.

What was equally as bizarre was that police had allowed traffic to continue up the bridge.

When the protesters decided to walk back towards Melbourne, cops decided to create a Mexican stand-off in the dead centre of the freeway – with traffic still flowing from the east.

It was the most people Melbourne’s CBD had seen for months.

Sadly the only retailers to benefit were cafes around Queen Victoria Market and the various bottle shops.

Apart from some rough sleepers, very few on the street were about to witness the march.

The only observers to the chaos appeared to be fellow tradies who gawked with glee from the service station on the freeway. 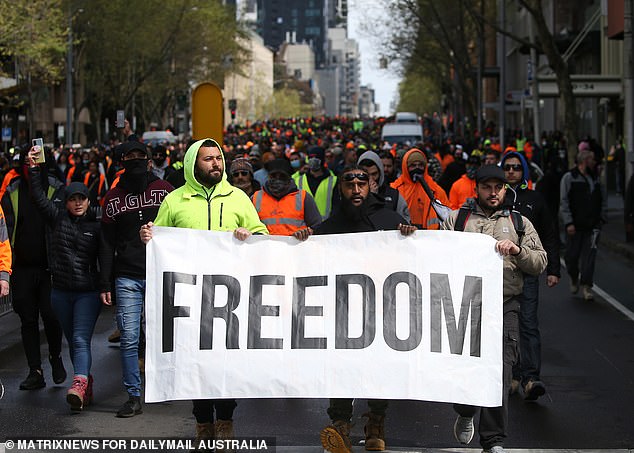 Some preach ‘freedom’ while others want ‘pain’

City residents perhaps wisely kept their comments to themselves – this was not a mob you wanted to trifle with from the balcony of a high-rise flat.

The mob claimed they ‘built this city’.

And while that may have been true for their fathers, you couldn’t help but wonder whether it applied to many of those in attendance.

Hours earlier, police looked certain to take control of the situation where it all began- outside CFMEU headquarters on Elizabeth Street.

It took but the lighting of a flare and the hurling of a plastic bottle for police to hit the megaphone and issue what appeared to be an ultimatum.

Stuck between the protesters and the police, a pack of photographers and television cameras waited anxiously.

They were peppered with abuse from the mob with familiar jibes about ‘fake news’. 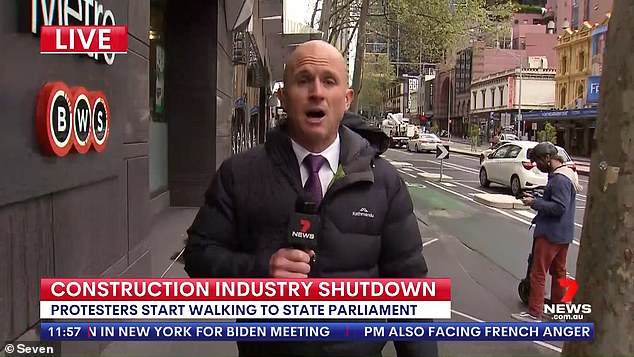 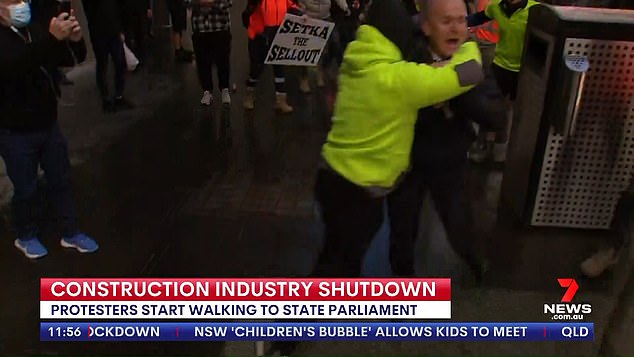 Dowsley is tackled by a flouro wearing coward on Tuesday

But it was more than just jibes. These blokes aimed to intimidate. Some wanted to inflict pain.

A woman chased Channel 7 reporter Paul Dowsley up the road to the point he almost crashed into the police blockade.

His day was about to get much worse.

With police moving forward, the protesters began moving along Victoria Street towards Parliament.

While the ‘people’s champion’ Rukshan Fernando live streamed to his Facebook page from up front, something more sinister was happening at the rear.

A Channel 7 crew was attacked and Dowsley was repeatedly spat on before being assaulted.

The mob swirled, tossing what stank as if it was urine all over myself and the television crew. 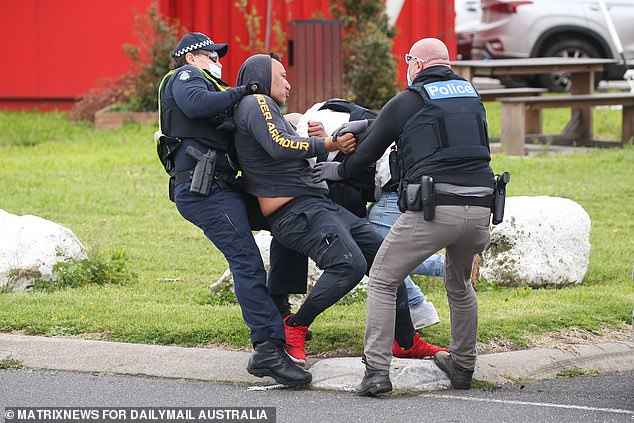 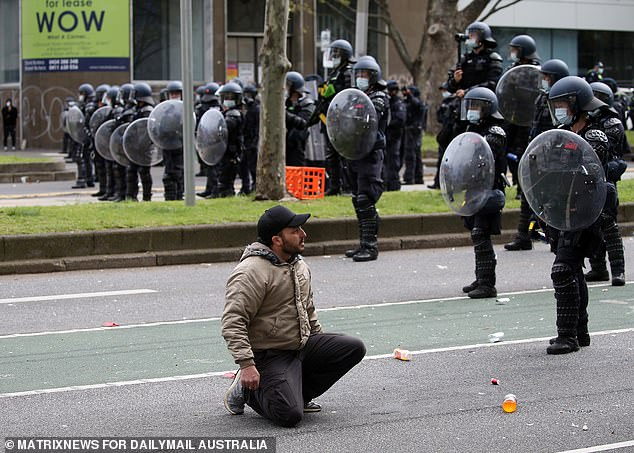 A protester pleads with police outside CFMEU HQ on Tuesday. An explosion saw him take-off moments later 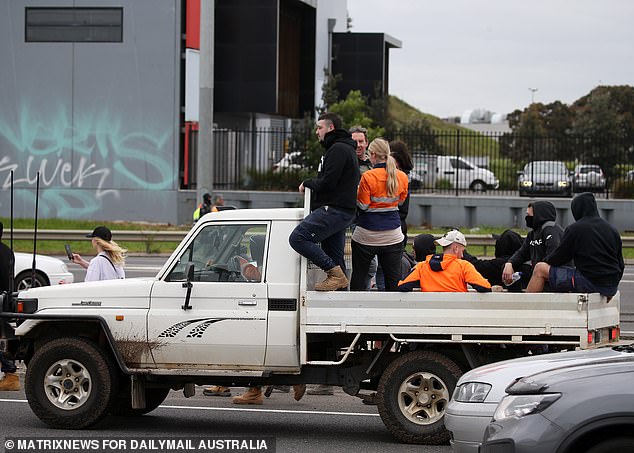 Protesters on the West Gate Freeway on Tuesday

‘For the kids’, they shouted at police.

Then to the bottle-o for another few cans.

Woolies on Exhibition Street was doing a roaring trade.

By mid afternoon, the horde began to up their angst towards anyone they believed to work for mainstream media.

I hid my accreditation and thought it better to take my chances with a face full of pepper foam from police than a king hit from a drunken tradie. 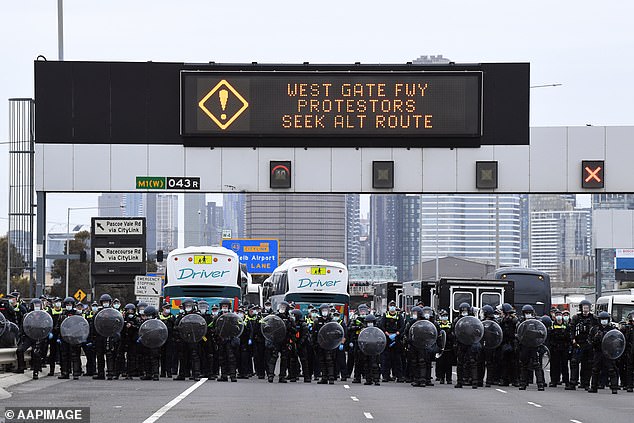 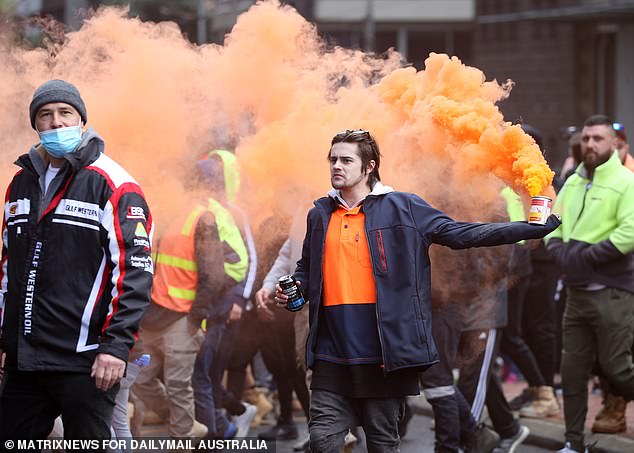 Around the corner from CFMEU HQ, the sound of thunder cracked at ground level, followed by acrid smoke.

Police had been firing off pellets sporadically throughout the day.

On Wednesday the mob will return for another crack at cops, Setka and the media.

It’ll be a good day for a few cans with mates among what has felt like an endless lockdown for Melburnians.

‘Every day,’ they chant.

And you have to believe them after today’s shemozzle. 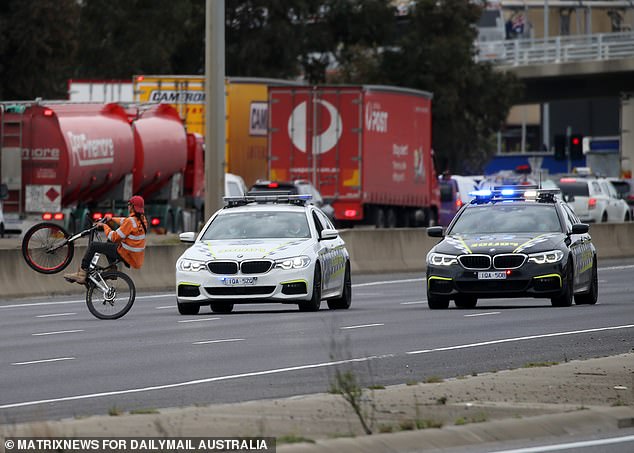