The Duchess of Cambridge is paying a surprise visit to London’s Imperial War Museum ahead of Armistice Day to see letters about three brothers of her great-grandmother, all of whom fought and died in the First World War.

Stepping out for her second engagement of the week, Kate, 36, is visiting the IWM’s Documents Archive and will also undertake a short tour of the First World War Galleries.

Kate cut an elegant figure in a simple blue shift dress by Jenny Packham, teamed with her go-to nude heels.

She’s set to meet historians, curators and the fellow descendant of a First World War soldier, and will also be shown a letter of condolence from the Keeper of the Privy Purse at Buckingham Palace to her relatives.

It’s been a busy week so far for the Duchess who paid a visit to Coach Core Essex in Basildon yesterday to meet with young coaching apprentices.

The Duchess of Cambridge is paying what’s set to be a poignant visit to London’s Imperial War Museum to view letters relating to the three brothers of her great-grandmother, all of whom fought and died in the First World War 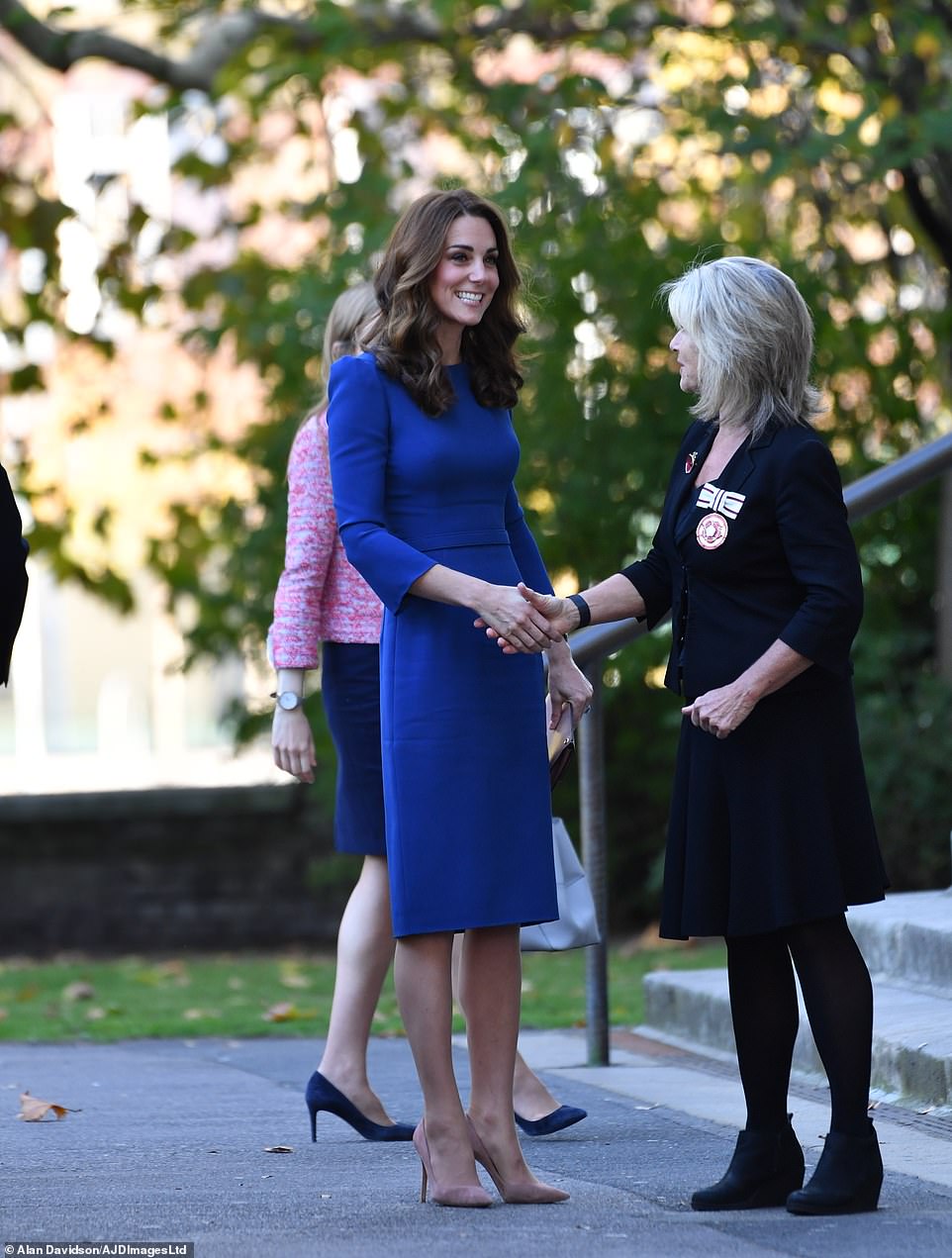 The Duchess of Cambridge is at The Imperial War Museum to view letters about three brothers of her great-grandmother, all of whom fought and died in the First World War, where she was greeted by Deputy Lord-Lieutenant of Lambeth, Rosi Prescott 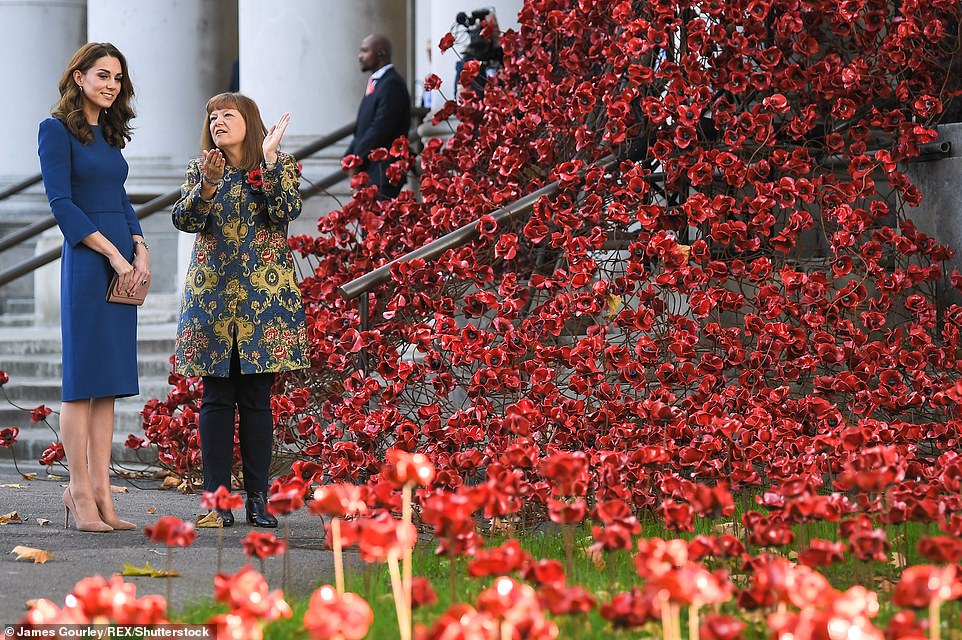 Before heading inside, Kate was shown the ‘Poppies: Weeping Willow’ artwork by Paul Cummins and Tom Piper by Diane Lees, Director-General of IWM 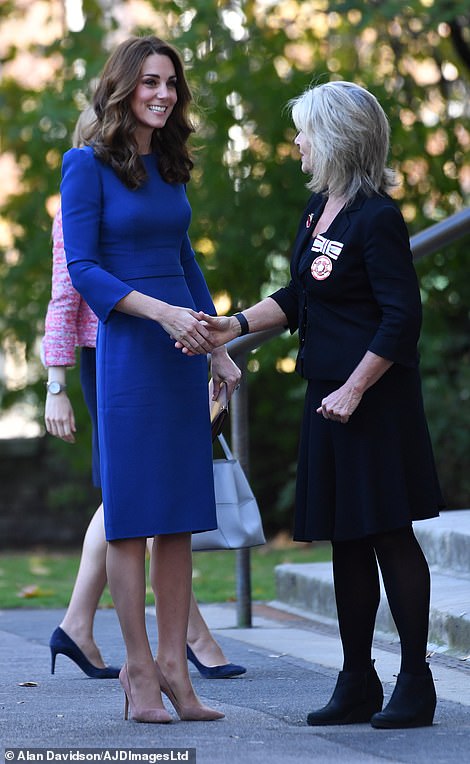 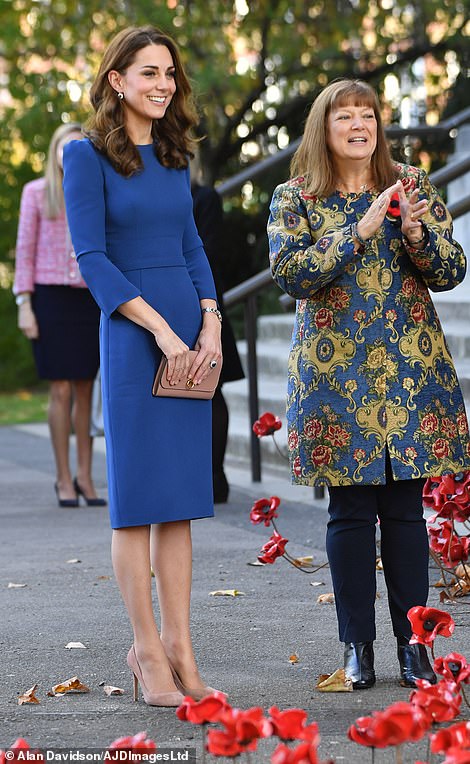 Back to her best! It’s been a busy week for Kate who today paid a surprise visit to the Imperial War Museum, a day after visiting Coach Core Essex in Basildon. The Duchess looked elegant in a blue Jenny Packham dress and carried a nude clutch by Mulberry 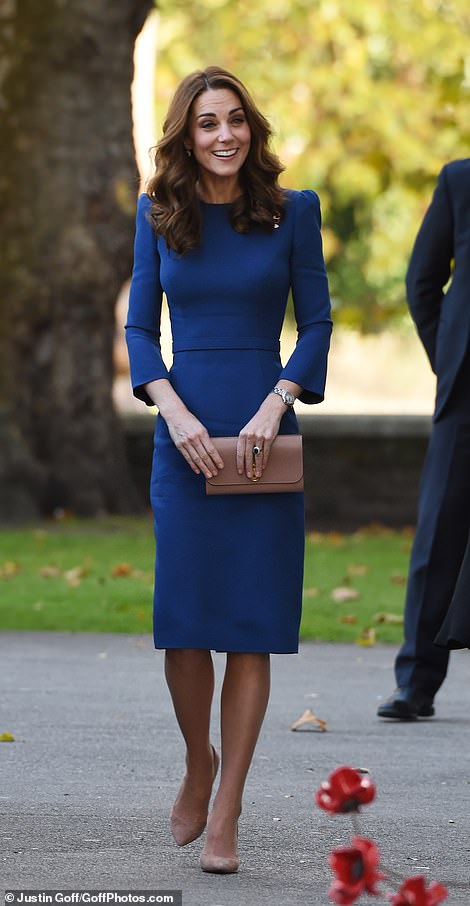 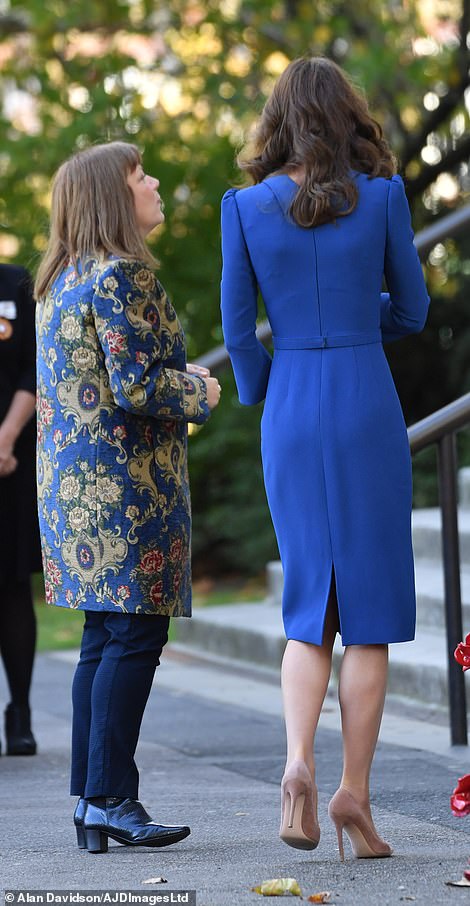 Kate was impeccably co-ordinated for the occasion, matching her nude Mulberry clutch to her heels. The Duchess, who was a vision of royal blue, was shown inside by Diane Lees, Director-General of IWM, after viewing the Poppies: Weeping Willow artwork

Kate has been getting back into the swing of royal duties throughout the month of October, following her return from maternity leave.

She was seen at a handful of family events over the summer, including Prince Harry’s wedding and Trooping The Colour, but has been enjoying time away from official duties since Prince Louis’ birth in April.

Even though Kate was resumed royal duties, her ‘primary focus’ will be her children throughout the Autumn, according to palace aides.

Meanwhile, her sister-in-law Meghan and Prince Harry have been the focus of attention in recent weeks as they complete their first major official overseas tour as a married couple.

Kate confronts horrors of family’s past: Heartbreaking letters reveal how her great-grandmother’s three brothers were all killed within two years after signing up to fight in WWI

All three sons of Kate’s great-great-grandfather Francis Martineau Lupton were killed in action within two years of each other while serving during the conflict.

She will be shown several documents relating to her relatives’ experiences, including a letter of condolence from the Keeper of the Privy Purse at Buckingham Palace.

One of the three brothers, Lieutenant Lionel, served with 28th Brigade Royal Field Artillery, spending time in the front line trenches in France. He died at the Somme. 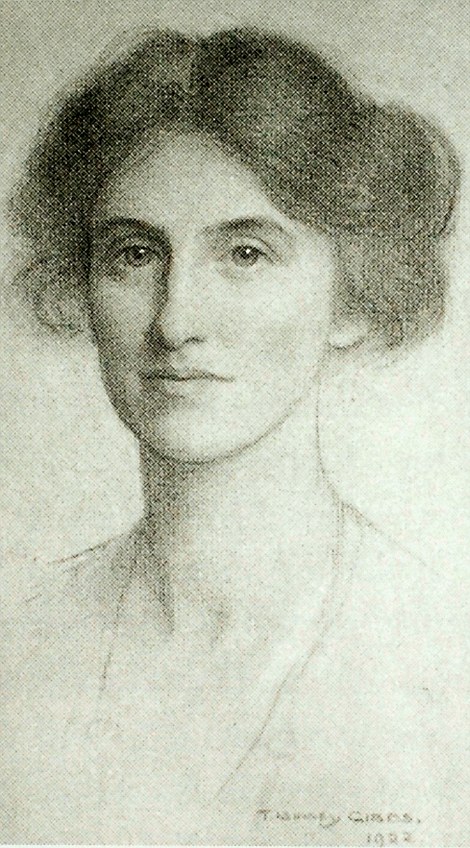 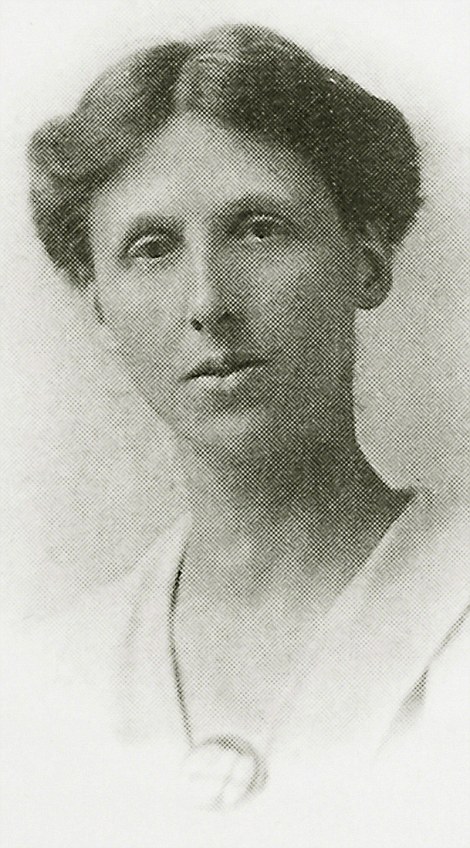 The brothers had two sisters – Anne (left) and Olive (right). Kate is descended from the latter

Captain Maurice served with the 7th Battalion West Yorkshire Regiment and also spent time in the trenches, occasionally seeing Lionel, but he was killed by a sniper.

Major Francis, who was the last of the three sons to be killed – on February 19, 1917 – served with the 8th Battalion West Yorkshire Regiment and was killed by a bomb.

Francis Martineau had five children – with the other two being his two daughters, Anne, who lived the longest of all five until 1967, and Olive, who died in 1936.

Today, the Duchess will view Olive’s registration card and a telegram announcing that the body of Major Francis Lupton, Kate’s great uncle, had been found. 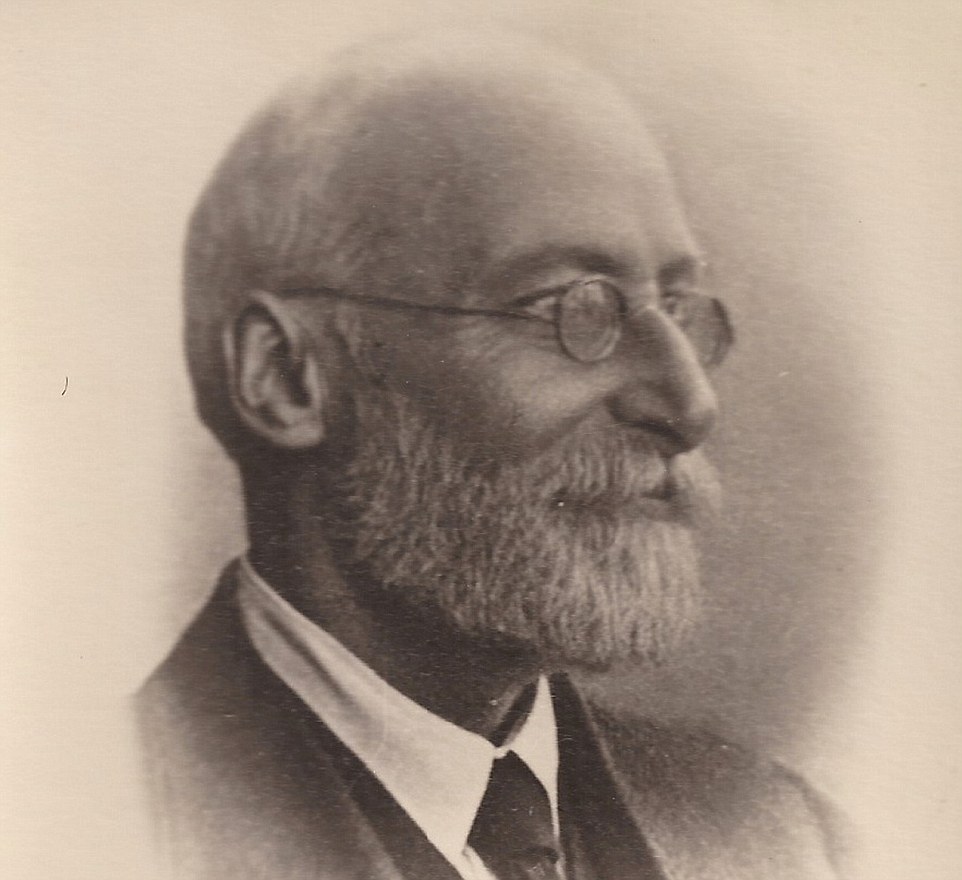 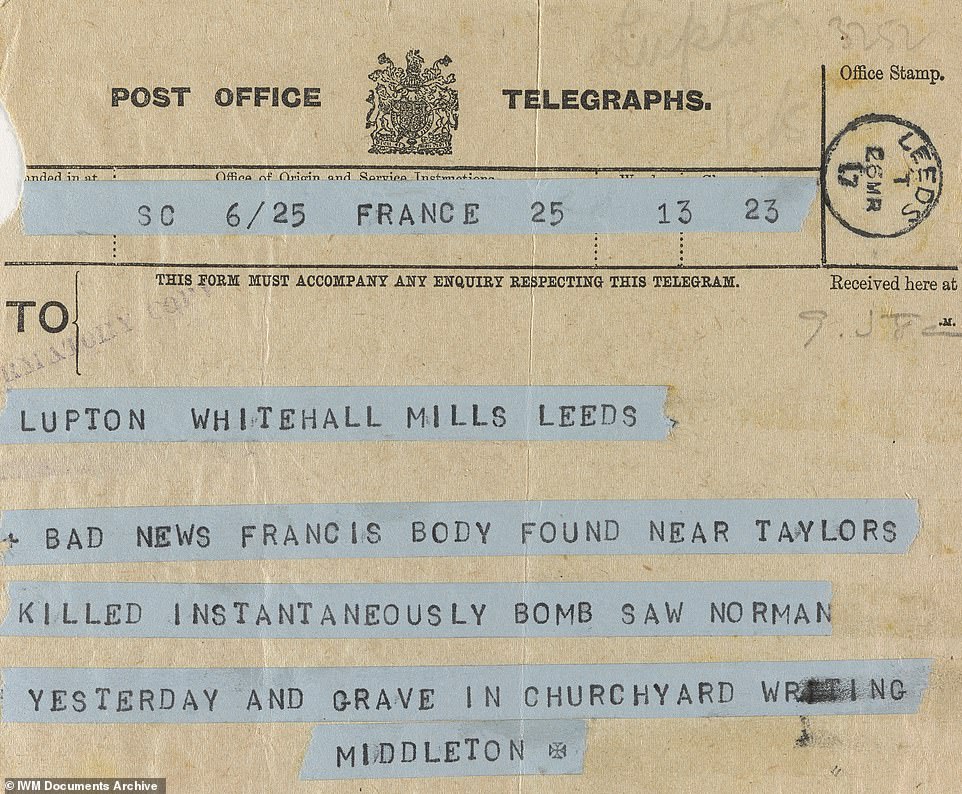 A telegram from Lieutenant Richard Noel Middleton – Olive Lupton’s husband – on March 26, 1917 announcing that the body of Major Francis Lupton, Kate’s great uncle, had been found

Kate will also see a map of the Western Front and pictures of trench gardens, trench pets and burial services – all of which relate to her relatives’ war experience.

It is the family of Olive, who worked as a nurse in the Voluntary Aid Detachment during the First World War, that provides a direct link to the Middleton family today.

Olive, who is Kate’s great-grandmother, married Lieutenant Richard Noel Middleton, who also corresponded with the family during the conflict.

The couple had a son called Peter, a Second World War Mosquito pilot, and he then had Michael Middleton – the father of Kate, socialite Pippa and businessman James.

Kate will today visit the Imperial War Museum in Lambeth, South London, to view letters relating to Maurice, Lionel and Francis ahead of Armistice Day in 11 days’ time.

The letters and documents are said to provide a fascinating and poignant account of life and death in the trenches, and are from the IWM’s documents archive.

The museum said the archive provides a means to research, reflect and remember the contribution and sacrifice made by so many families during the First World War.

Before looking at the letters, Kate will take a tour of the First World War Galleries where she will be shown parts of them that relate to the experiences of her relatives.

She will meet historians, curators and the fellow descendent of a First World War soldier – and visit the Explore History room, a drop-in research and work space.

The IWM’s director-general Diane Lees said: ‘We are delighted that these documents are now part of IWM’s Documents Archive.

‘(They) provide a truly fascinating insight into what life was like in the trenches, and show the sacrifice that so many families made during the First World War.

‘Our Documents Archive remains one of the world’s foremost archives covering the personal experience of warfare since 1914.

‘This latest acquisition will only enhance our collection and will be an invaluable resource to research into a conflict that still has relevance and impact today.’

Even earlier newsreels of Sir Charles visiting the Leeds Pals Battalion in the Yorkshire Dales during the First World War were also discovered.

Sir Charles and Francis, who were Trinity College Cambridge academics, had two other brothers – Arthur and Hugh, the latter of whom also became Lord Mayor.

Links to the Lupton family were discovered by history teacher Michael Reed and his pupils in Australia in April 2013 during a class project.

Mr Reed traced Kate’s family back five generations to the Marquess of Lansdowne and his brother Thomas FitzMaurice, of Cliveden House in Buckinghamshire.