The Duchess of Cambridge proved she remains queen of the high street as she donned a set of £5 Accessorize earrings for a video call with Prince William yesterday.

Prince William, 37, and Kate Middleton, 38, spoke to volunteers from Shout in different parts of the country to thank them for the support that they provide to their communities, during a Zoom call to marked Volunteers’ Week from their Amner Hall home on Wednesday.

The Duchess, who is famous for mixing high end designers with high street steals, opted for a trendy set of gold hoops from the cut-price store.

She paired the bargain earrings with a £255 white broderie anglaise Mabel shirt by M.I.H Jeans, which features scallop trim on the neck and puffed sleeves, previously worn for a visit to her garden at the Chelsea Flower Show last May.

Kate Middleton, 38, re-wore her £5 Accessorize earrings as she joined Prince William, 37, for a video call with  volunteers from the mental health text service Shout

The mother-of-three is currently isolating with her husband Prince William, 37, and their children, Prince George, six, Princess Charlotte, five, and Prince Louis, two, in Anmer Hall in Norfolk.

Yesterday she donned the trendy white shirt, which featured buttons down the chest, sweeping her hair into a ponytail to reveal the neck detailing.

She sported glamorous makeup with a touch of sparkling eyeshadow and a sweep of bronze, and pulled her hair into an trendy up-do to reveal the high-street bargain earrings.

Online, the elegant earrings are described as ‘simple yet eye-catching’ and feature a ‘textured, twisted surface that shines in the light’. 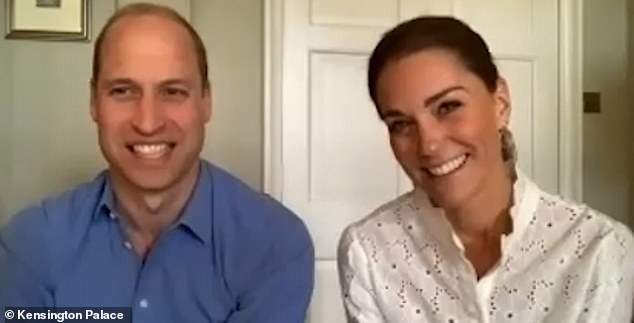 The Duchess of Cambridge opted for the high-street bargain earrings with a pretty £255 white broderie anglaise Mabel shirt by M.I.H Jeans for the call 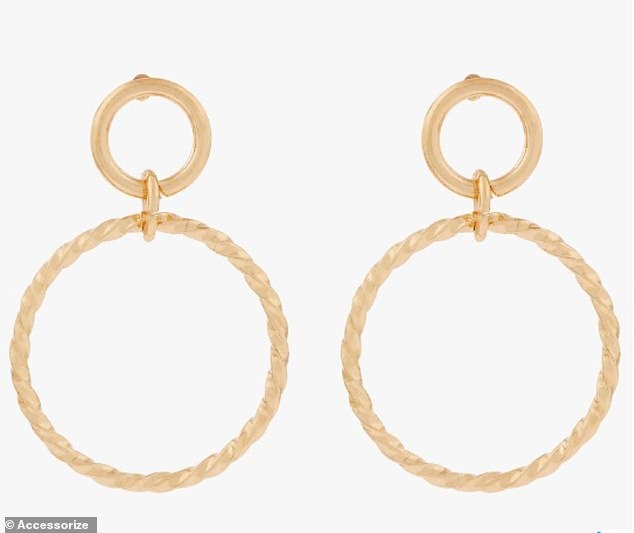 The earrings, which are currently available on the Accessorize website for £5, are described online as simple yet eye-catching’

Kate has previously worn the high-street brand, opting for a £5 gold pair of earrings  during an evening reception in Ireland in March, and once surprising fashion followers with a set which cost just £1.50.

In April, for her first royal engagement via video call during lockdown, the royal selected a £29.99 Zara jumper as she speak with school children whose parents are working on the frontline.

And she later opted from high street stalwart Ghost’s Anouk Dress, which features fabric-covered buttons all the way down and romantic ruffles along the collar and hem, as she stepped out of her home at Anmer Hall for the Clap for Carers. 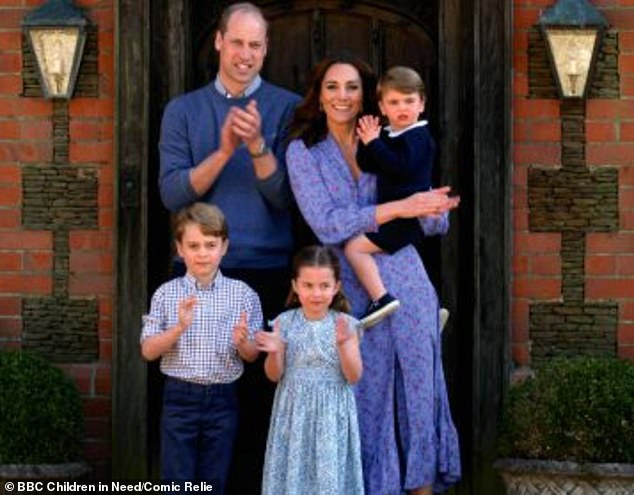 It’s not the first time the Duchess has worn the high-street brand during lockdown, opting for a pair of £8 Accessorize earrings, which she paired with a £129 Ghost dress, for the NHS Clap for Carers in April 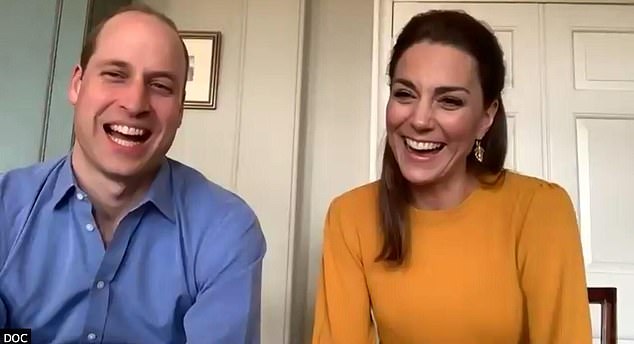 Meanwhile for  her first virtual appearance during lockdown, the royal opted for a £29 jumper from high-street brand Zara

The royal paired the £129 dress with her set of £8 Polly Petal earrings from Accessorise.

Kate and Prince William joined together to mark the first anniversary of Shout 85258 – a round-the-clock text messaging helpline developed by his Royal Foundation – by speaking to some of its volunteers via video call yesterday.

The Duke of Cambridge has revealed he has been secretly counselling people contacting crisis helpline, revealing: ‘I’m going to share a little secret with you guys, but I’m actually on the platform volunteering.’

Kate has also been helping others and has taken part in ‘check in and chat’ calls with those self-isolating or vulnerable as part of the Royal Voluntary Service’s NHS Volunteer Responders scheme.

William, who has not disclosed if they have sent their children back to school, admitted that he struggles with Prince George’s year 2 maths homework – calling it daunting at times’.

The Cambridges and the Duke and Duchess of Sussex helped to launch the crisis line in May last year, investing £3 million in the service through their Royal Foundation.