The Duchess of Cambridge stepped out in Birmingham today showcasing the ‘new royal order’ by launching a landmark survey on children’s health and happiness – as Prince Harry started his new life with Meghan and Archie 5,000 miles away in Canada.

Today, in a further glimpse into how the royals will look post-Harry, Kate launched a survey of early childhood she hopes will trigger ‘lasting change for generations to come’.

The Duchess of Cambridge is spending 24 hours touring the country to publicise the initiative and said today: ‘As a parent, I know how much we cherish the future health and happiness of our children. 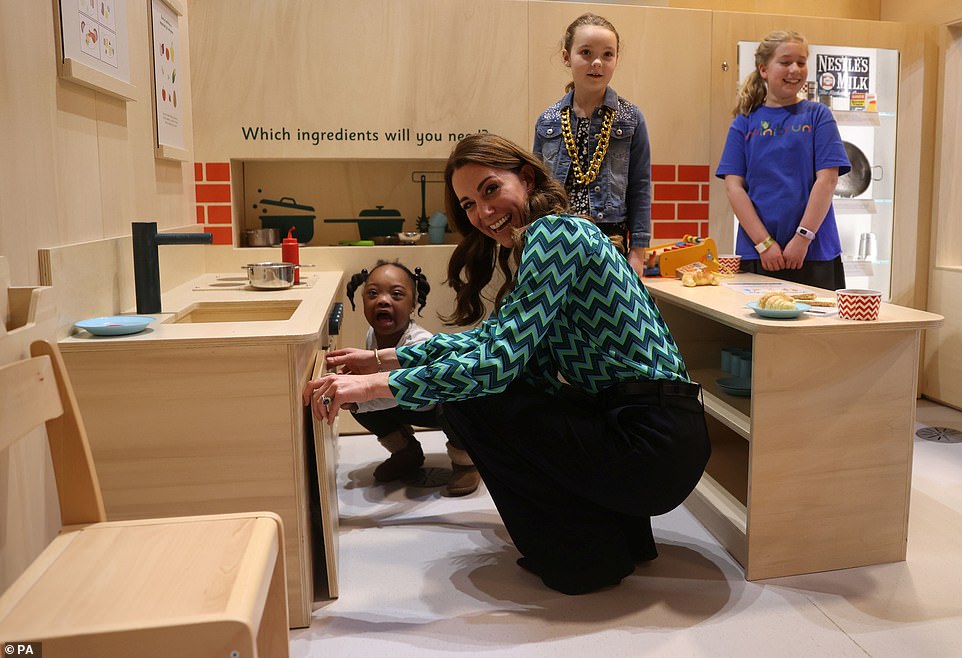 The Duchess of Cambridge appeared without a care in the world as she spent time at the MiniBrum, an interactive, child-sized mini-city at Thinktank, Birmingham’s science museum 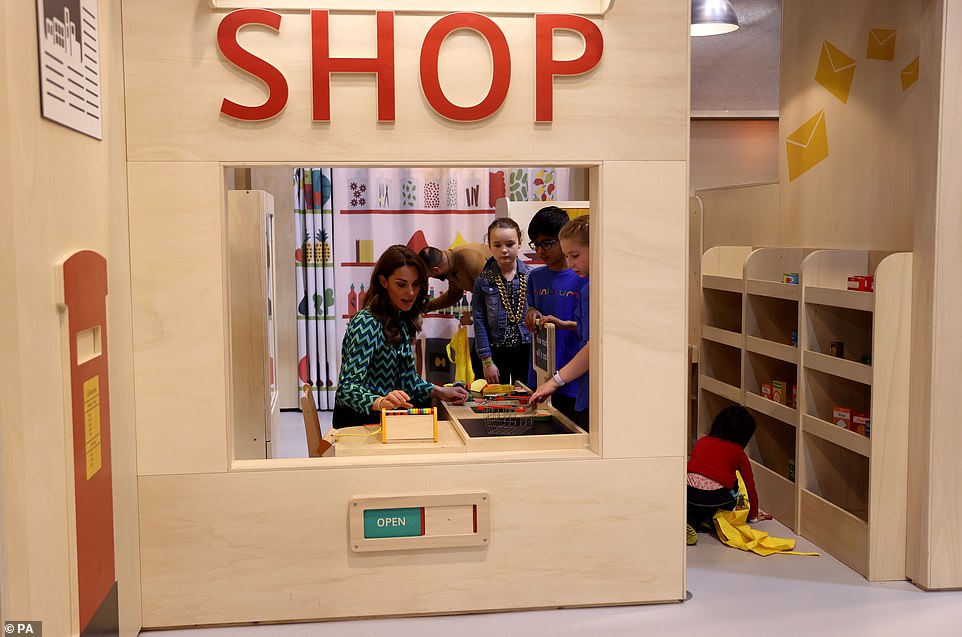 Today, in a further glimpse into how the royals will look post-Harry, Kate launched a landmark survey of early childhood, she hopes will trigger ‘lasting change for generations to come’ 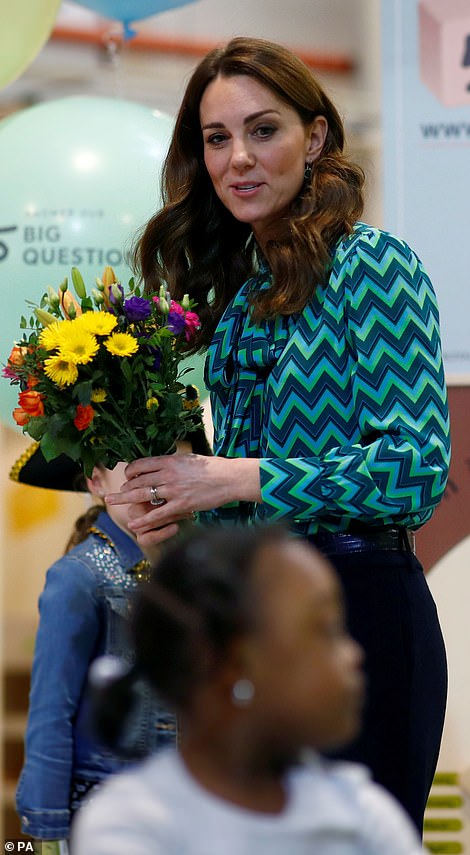 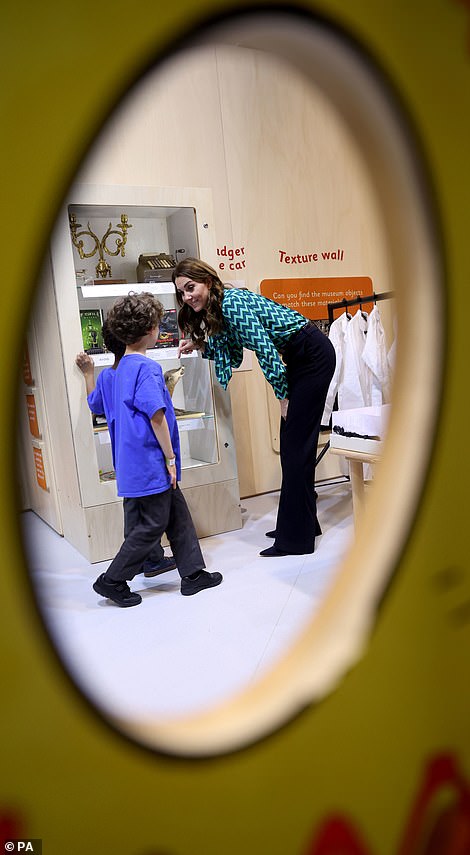 The Duchess of Cambridge attends the launch of a UK-wide survey on early childhood at Thinktank, Birmingham Science Museum

‘I want to hear the key issues affecting out families and communities so I can focus my work on where it is needed most. My ambition is to provide lasting change for generations to come.’

The mother-of-three kicked off her solo whistle-stop tour in Birmingham today and will take in London, Cardiff and Surrey tomorrow to raise awareness of the poll, ‘Five Big Questions on the Under Fives’, thought to be the largest of its kind in the UK.

Speaking at MiniBrum, an interactive, child-sized mini-city at Thinktank, Birmingham’s science museum, the duchess said: ‘I’m here today to launch a survey to hear society’s views about raising the next generation.

‘Parents, carers and families are at the heart of caring for children in the formative years so that is why I really want to listen to them. 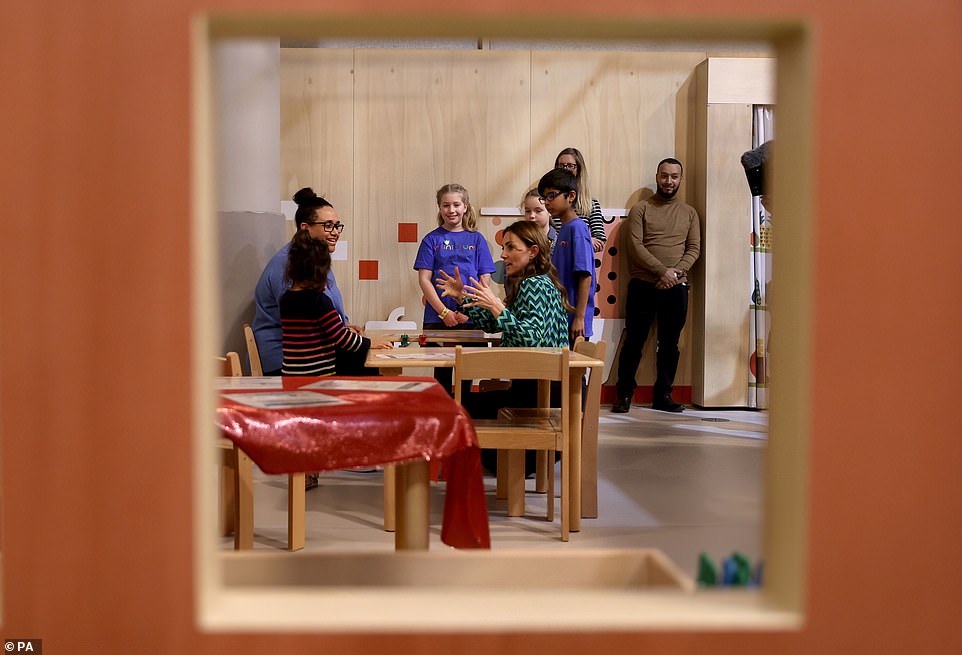 Wearing a bright green patterned shirt and wide-legged trousers, Kate was given a tour of the ‘town’ by eight-year-old ‘mini mayor’, Poppy Jordan 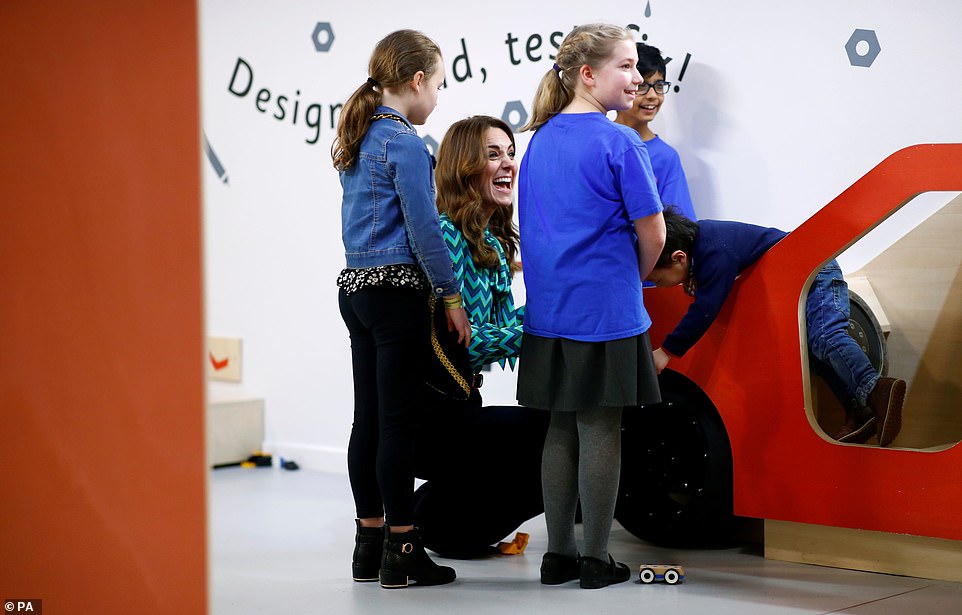 Children from Henley Montessori School and St Paul’s Nursery in Balsall Heath, showed the royal visitor their workshop, before popping into the laundrette, a shop, a cafe and a mini-museum

‘The Early Years are more crucial for future health and happiness than any other moment in our lifetime.’

Wearing a bright green patterned shirt and wide-legged trousers, Kate was given a tour of the ‘town’ by eight-year-old ‘mini mayor’, Poppy Jordan.

Children from Henley Montessori School and St Paul’s Nursery in Balsall Heath, showed the royal visitor their workshop, before popping into the laundrette, a shop, a cafe and a mini-museum.

There was a minor calamity in the cafe when the door of a cupboard underneath a sink came off its hinges, prompting laughter. ‘I think we’ve broken the cafe,’ Kate laughed.

She also toured a construction corner, helping to hoist rubber bricks up to a crane in a harness and encouraging one small child to don her safety hat.

After being presented with a posy by Poppy as a thank you for visiting the ‘city’, the duchess met various parents who have been involved in the project, including Giovanna Fletcher, whose podcast Happy Mum, Happy Baby is aimed at ensuring that new mothers do not feel alone. 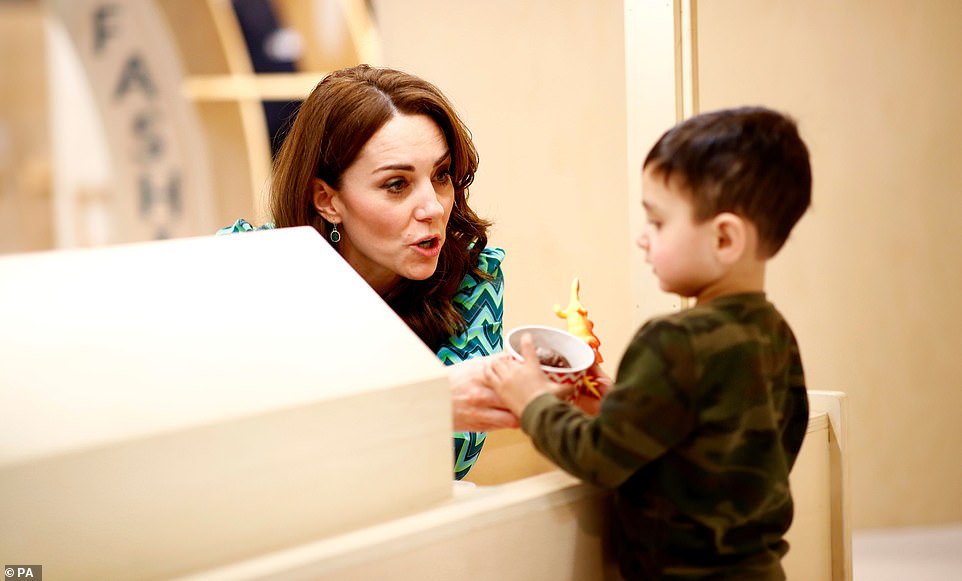 Kate Middleton has a chat to a boy during her visit. She also toured a construction corner, helping to hoist rubber bricks up to a crane in a harness and encouraging one small child to don her safety hat

The group then sat down together to discuss various issues surrounding parenthood and the role that local communities can play.

Kate, 38, said: ‘What we experience between the ages of nought and five shapes the developing brain.

‘They help us avoid adversity, or certainly build resilience to adversity in later life, prevent challenges with mental health later down the line.

‘As a mother, it’s given me a different perspective.

‘There’s so much pressure on parents to feel the responsibility is just down to them but actually it’s important to work together as a community.’

The poll will be online for a month, with the results – which will be revealed in March – determining the next steps of the duchess’s early years project.

Questions range from: ‘What do you believe is most important for children growing up in the UK today to live a happy adult life?’ ; and ‘Which period of a child and young person’s life do you think is the most important for health and happiness in adulthood?’. 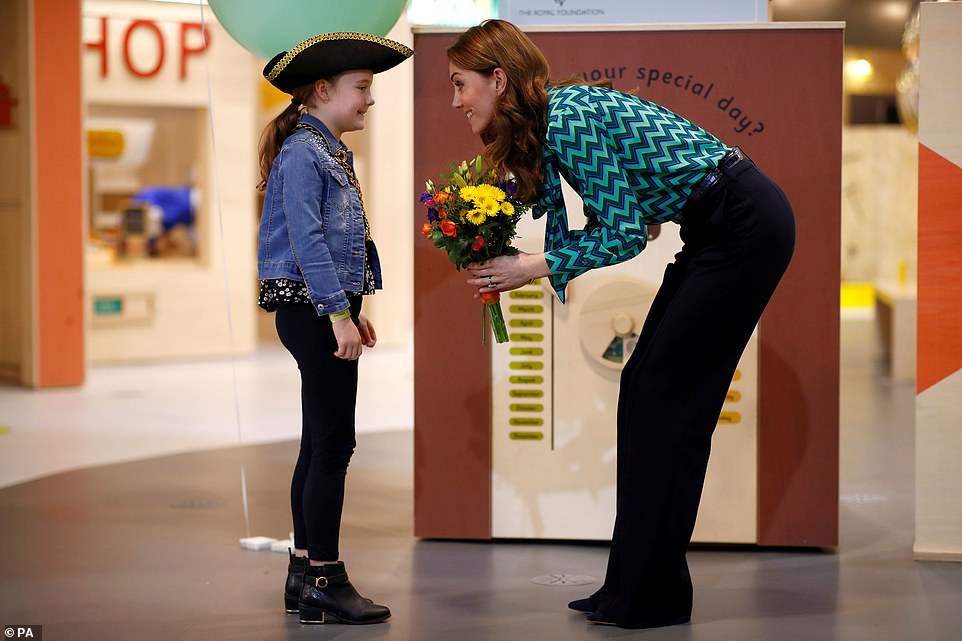 The Duchess of Cambridge receives a bouquet as she attends the launch of a UK-wide survey on early childhood at Thinktank, Birmingham Science Museum 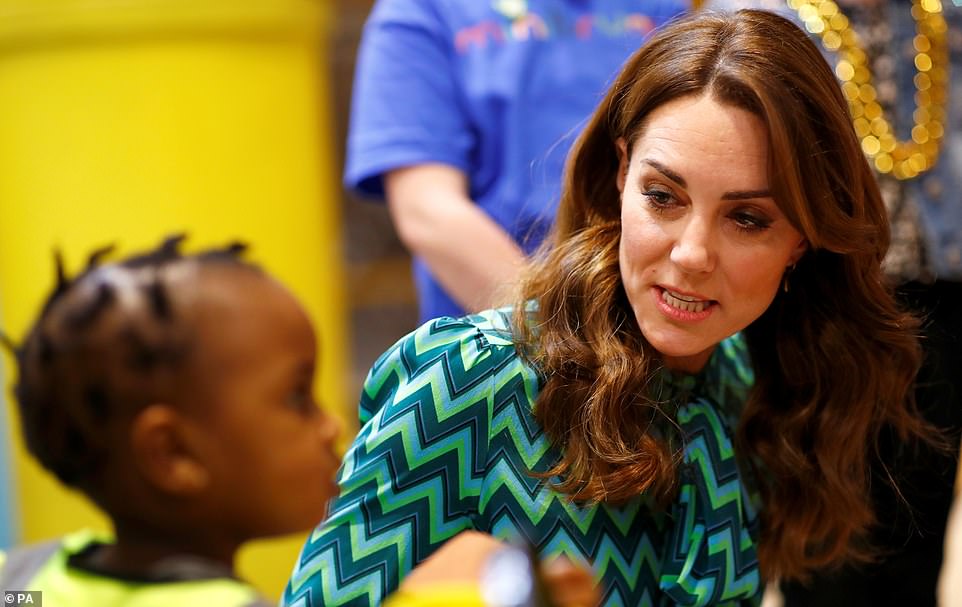 Speaking at MiniBrum, an interactive, child-sized mini-city at Thinktank, Birmingham’s science museum, the duchess said: ‘I’m here today to launch a survey to hear society’s views about raising the next generation’ 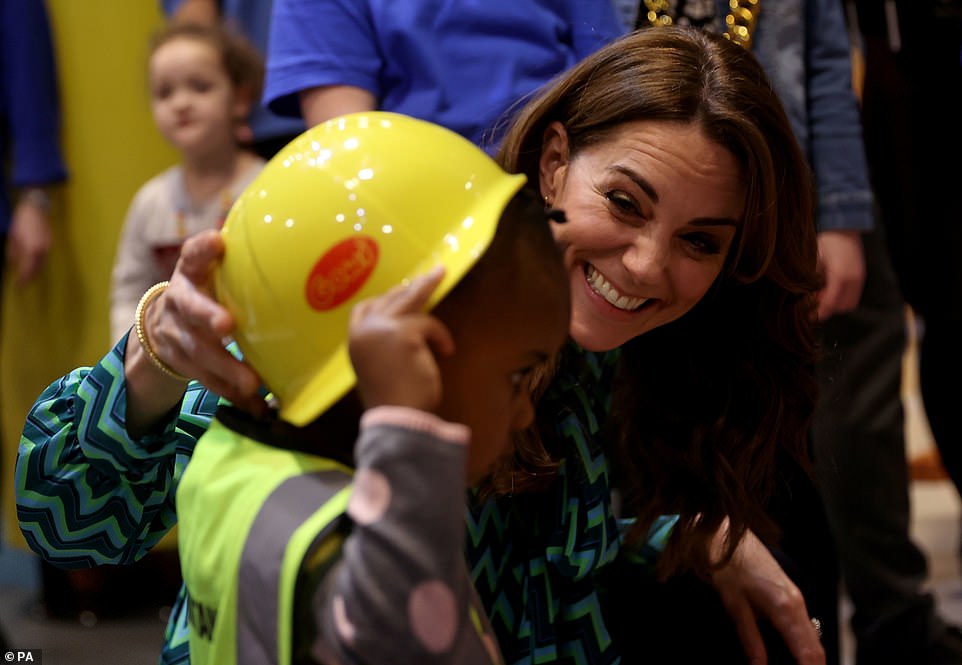 It can be accessed at www.5bigquestions.org.uk

Kate has been working on the initiative since her marriage eight years ago, dedicating the vast majority of her public and private engagements to early years provision.

She has worked with experts who believe that many of the hardest social challenges facing society – such as addiction and social exclusion – can often be traced back to experiences in early childhood.

In 2018, she convened a steering group of experts from academia, education, health and other fields to focus on how to help families tackle anti-social behaviour, addiction and mental health, which has played an instrumental role in compiling the survey. 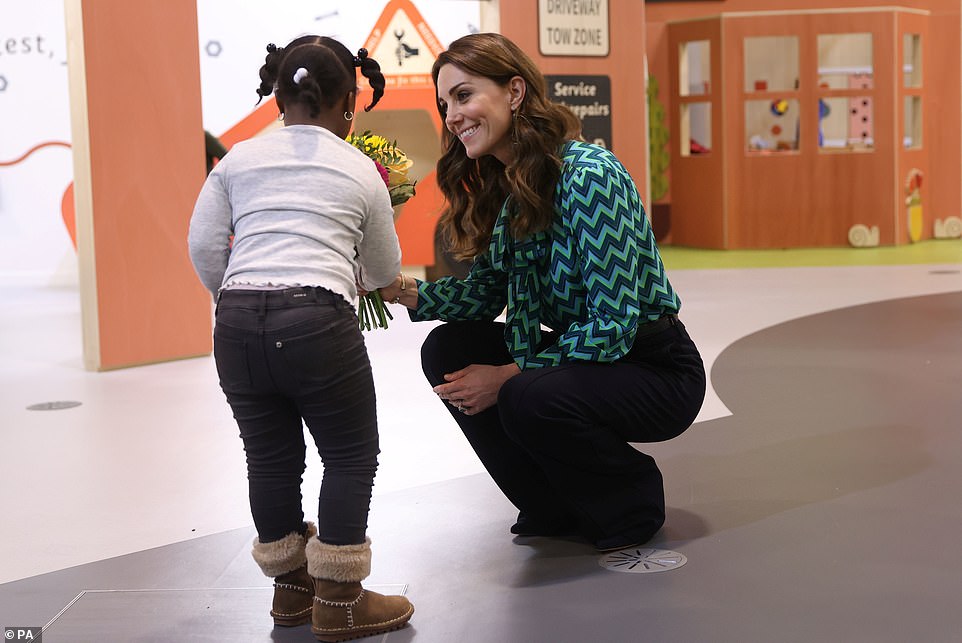 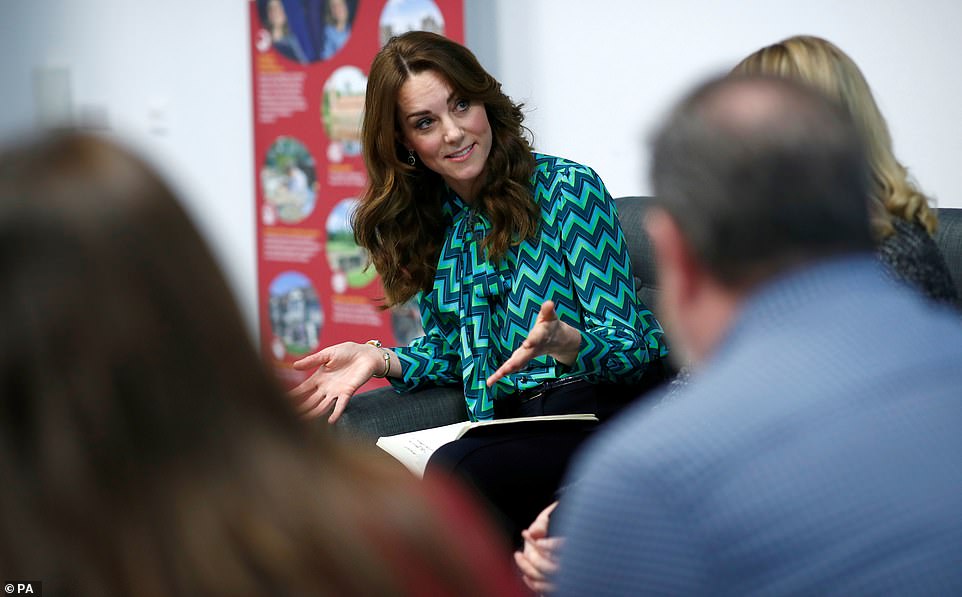 After the tour, the group then sat down together to discuss various issues surrounding parenthood and the role that local communities can play. 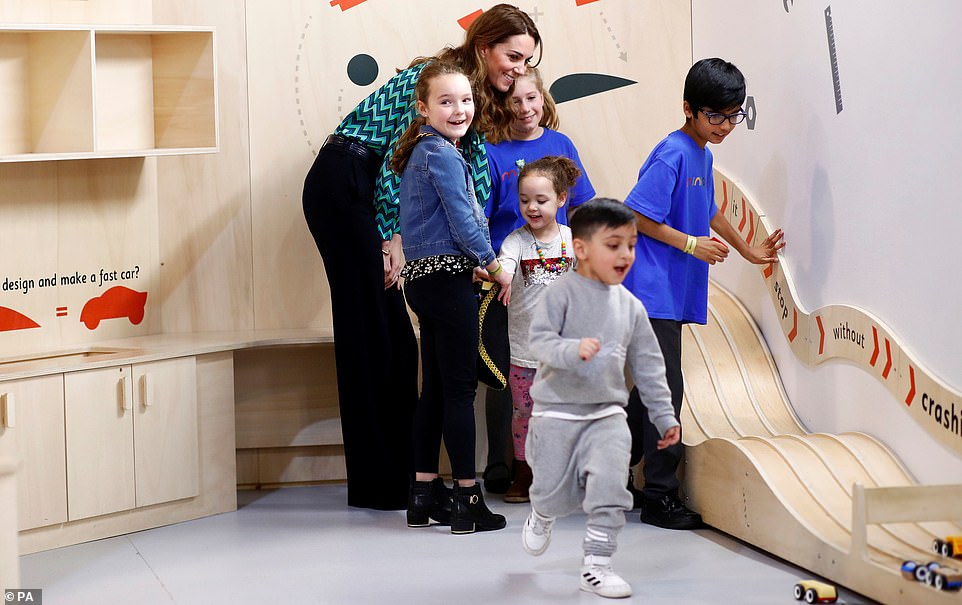 One of its members, David Holmes CBE, chief executive of Family Action, of which the Duchess is patron, said: ‘Every parent, carer and family wants the best for their child and raising the profile of the vital early years in a child’s life is work of national importance.

‘The insight this survey will give the early years sector valuable direction in designing and delivering services and support which reflect what matters most to people.’

On Wednesday, the Duchess will join parents at London Early Years Foundation (LEYF) nursery in Southwark, central London, for the nursery drop off, before helping nursery workers serve breakfast to the children, highlighting the importance of nutritious food to a child’s development.

She will then travel to Cardiff to attend a baby sensory class at the Ely and Careau Children’s Centre where she will hear about the support that parents receive, as well as other engagements.

Kate Stanley, director of strategy for the NSPCC, said: ‘It’s fantastic to see The Duchess of Cambridge launch this survey today. The results will provide fascinating insight into how we think about the early years and it will be a vital source of information for the sector.’

Last night a grinning Duke of Sussex touched down in Vancouver and today it emerged he has already organised events across America for his charity Sentebale, which supports children affected by HIV in Lesotho and Botswana. 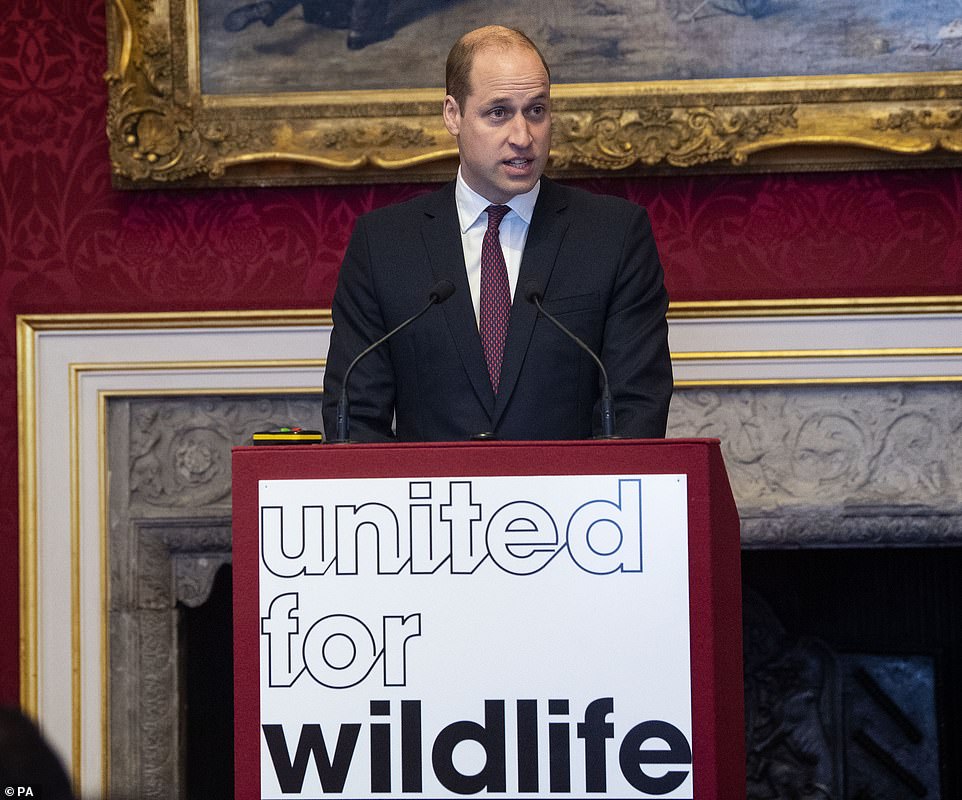 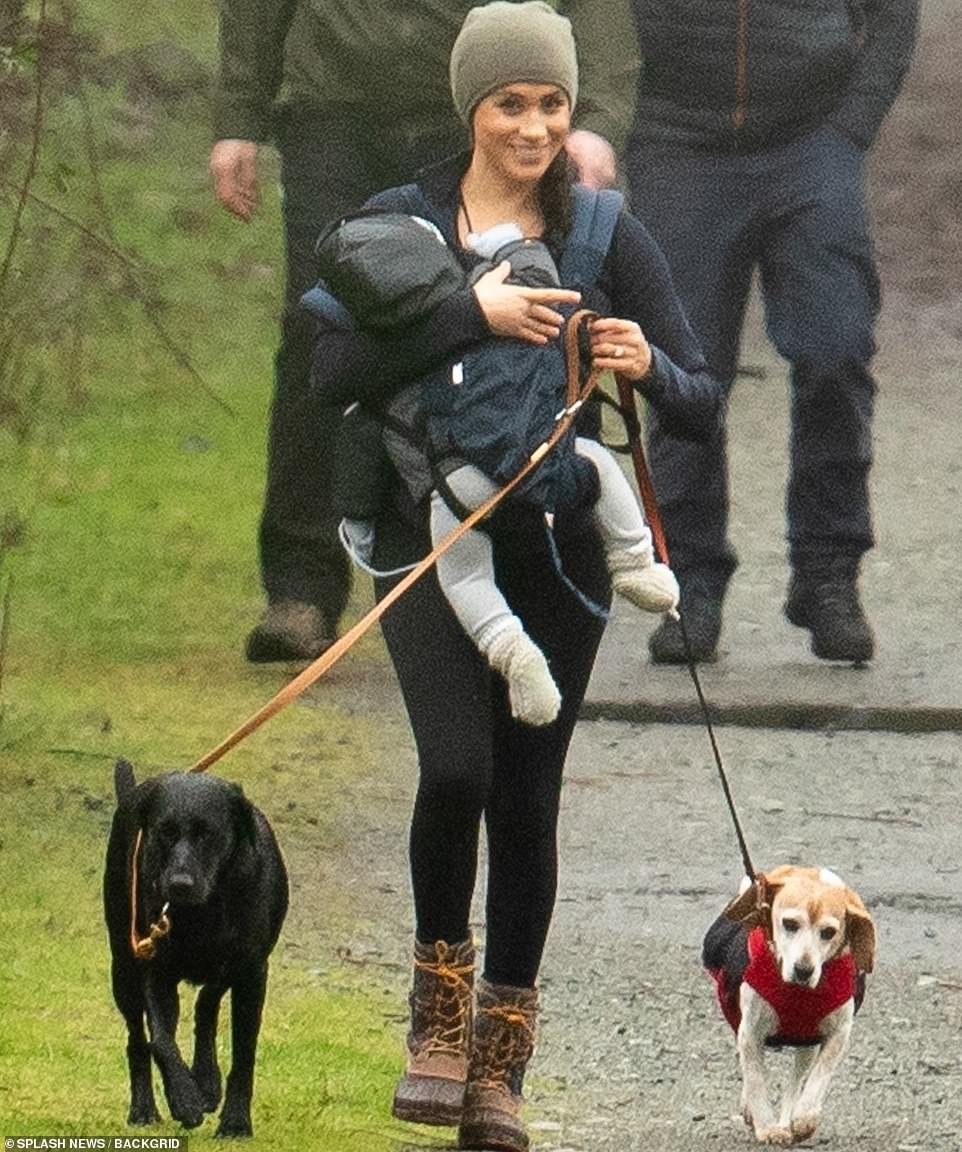 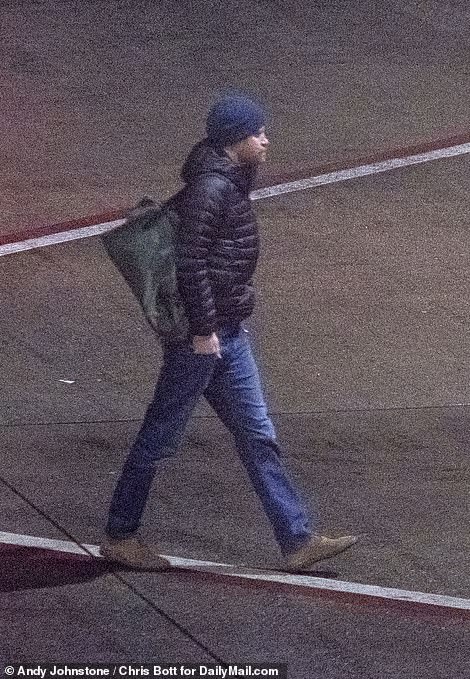 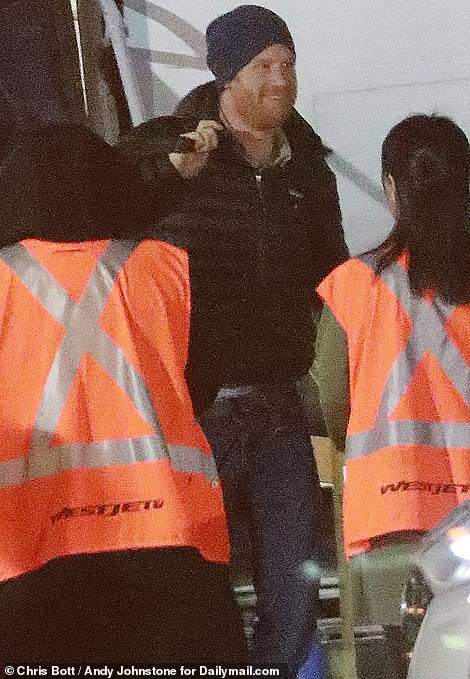 Harry landed on a BA flight to Vancouver Int (left). Harry flew on to Victoria airport on a smaller plane and smiled as he arrived having been away from his wife and son for almost two weeks

Harry, who used a Sentebale dinner in London this week to claim he and Meghan ‘no choice’ but to quit as senior royals, has pledged to help the world beat AIDS as a legacy to his late mother Diana, Princess of Wales, while his close friend Sir Elton John’s foundation has raised £240million [$300 Million] to fight the virus and help its victims.

Sentebale chairman Johnny Hornby told the Evening Standard today: ‘The duke is a global figure and HIV is a challenge for the world to try to help solve. We know the duke has the ability to challenge the stigma that surrounds HIV and shine a light on these issues, whichever side of the pond he finds himself on.’

Yesterday the Duke of Sussex rushed through a series of meetings at the UK-Africa Investment Summit in Greenwich and is not believed to have seen William before catching a 5.30pm flight out of Heathrow to Vancouver.

But he did reportedly hold a meeting with his Kensington Palace team about managing his and Meghan’s affairs because they will now be in Canada for the foreseeable future.

A smiling Meghan Markle took Archie and her two dogs for a walk in Vancouver hours before Harry landed in Canada.

Meanwhile, William hosted a summit of the United for Wildlife [UfW] taskforces at St James’s Palace, having held his first solo reception at Buckingham Palace last night while Harry was already crossing the Atlantic.

UfW was set up by the Royal Foundation – a joint foundation that was founded by William, Kate and Harry six years ago before he married Meghan – but the Duke and Duchess of Sussex then broke away from the foundation last June as rumours of a rift between the couples grew.

Prince Charles may turn to his multi-million pound inheritances from King George VI and the Queen Mother to bankroll Harry and Meghan’s Canadian adventure – but experts in royal finances fear taxpayers could still end up picking up the bill.

The Duke and Duchess of Sussex are worth up to £34million between them but have to pay back the £2.4million of public funds spent refurbishing Frogmore Cottage and are expected to buy or rent a gated mansion in Canada.

Charles has historically paid his son around £2.3million-a-year from his £1.2billion Duchy of Cornwall estate – which is considered a public asset because it has been gifted to the heir to the throne by every British monarch since 1337.

Charles is understood to have inherited millions from his grandfather King George VI, who died in 1952, and a significant sum from the Queen Mother, who died in 2002.

David McClure, the author of Royal Legacy, told The Times: ‘Charles is facing a significant outlay over a short period of time and may have to use private sources of income’, adding: ‘The Duchy of Cornwall is a cash cow for Charles so he is likely to have been able to use some of that money to build up a private portfolio of shares. Historically there has been a blurring of what is official spending and what is private.’

Former Lib Dem MP Norman Baker is an expert on Charles finances after writing his book And What Do You Do? What the Royal Family Don’t Want You to Know’ and claims Charles has banked £100million.

He said: ‘He [Charles] does not pay for anything if he is able to find someone else to foot the bill. He is the tightest of the royals’, and said: ‘He’ll support them [Harry and Meghan] through the Duchy of Cornwall. What he will then do, based on previous experience, is claim that as a legitimate expense and he will use that to reduce his tax liability and therefore the public purse will continue to support Harry indirectly.’