The Duchess of Cornwall has recalled how her mother’s rib broke just from a hug because of osteoporosis – and said she shows photographs of her parent before and after the condition to her grandchildren to help them avoid it.

Camilla, 74, said she would love to see more young people educated about the fragile bone disease – which causes painful, debilitating and sometimes fatal fractures, particularly of the wrist, hip and spine – when chatting to Gloria Hunniford for the BBC to mark World Osteoporosis Day.

The Duchess, who has been president of the Royal Osteoporosis Society (ROS) since 2001, reflected on her own experience of witnessing her mother, the Honourable Rosalind Shand, suffer with the condition.

She said the pain of watching the health of her mother and maternal grandmother, Sonia Keppel, deteriorate due to osteoporosis means she shows her grandchildren pictures of Rosalind before and after the illness took hold. Her mother died aged 72 in 1994, and her grandmother aged 86 in 1986. 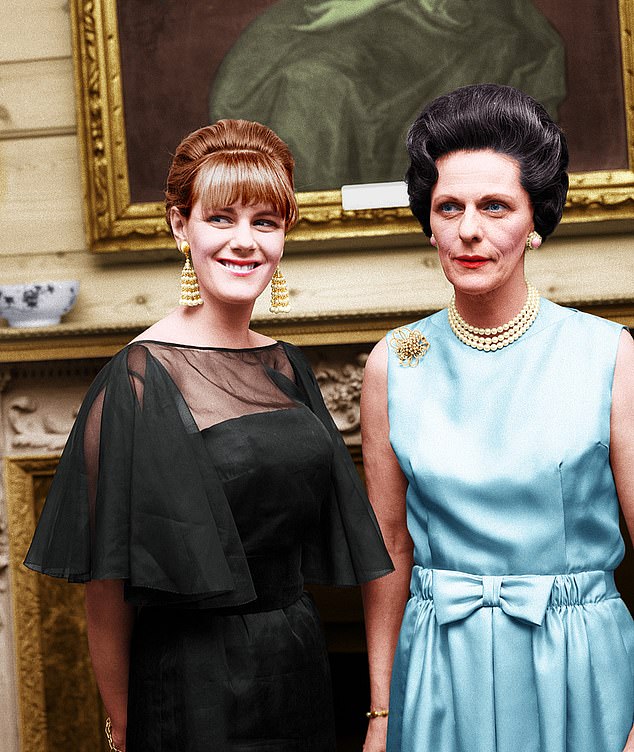 The Duchess, who has been president of the Royal Osteoporosis Society (ROS) since 2001, reflected on her own experience of witnessing her mother, the Honourable Rosalind Shand (pictured together in 1965), suffer with the condition

The duchess said she remembers how a hug from a friend caused her mother’s rib to break.

She said: ‘My mother, I think, went to see everybody you could possibly think of and they all said the same thing – “Sorry, you’re old”. We just watched her shrinking before our eyes.’

Asked how traumatic it was for the rest of the family, Camilla said: ‘It was terrible, because we didn’t know anything about it, so at some point we thought “well, is she making a great fuss about all this?”

‘Occasionally when she moved or you touched her she literally screamed. I remember when a friend of hers came in one day just to give her a hug, her rib broke. It was as bad as that.’

Camilla said osteoporosis can be prevented but not cured. 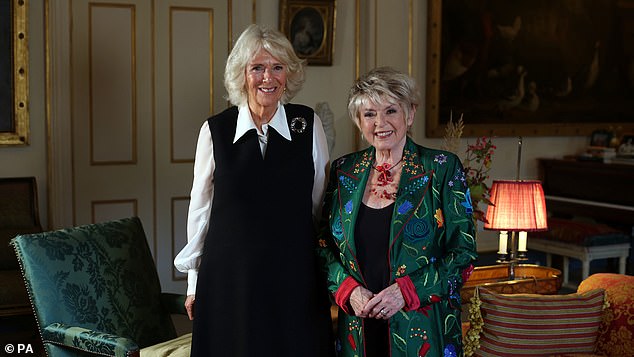 Camilla, 74, said she would love to see more young people educated about the fragile bone disease – which causes painful, debilitating and sometimes fatal fractures, particularly of the wrist, hip and spine – when chatting to Gloria Hunniford for the BBC to mark World Osteoporosis Day (pictured)

‘You have to prevent it by taking a look at yourself and saying “look I don’t want to have this disease”, so you must take a lot of exercise, walking in particular is the best thing,’ she said.

Osteoporosis – or thinning of the bones – occurs when the body fails to replace old bone with new. As a result, the skeleton becomes porous and weak.

Although it affects mostly women after the menopause, it can occur in younger women, and in men. One in three women and one in 12 men gets the disease at some time in their lives.

Because most people don’t realise they have it until they break a bone, it is often referred to as a ‘silent epidemic’. It results in 150,000 fractures a year.

Women have a far greater risk of osteoporosis, partly because of the effects of hormonal changes during the menopause – when oestrogen production, which strengthens bones, drops dramatically – and partly because they have less bone mass to begin with.

However, some women are vulnerable to fragile bones much earlier in life. Dancers, gymnasts and long-distance runners have all been shown to have higher incidence of osteoporosis than the general population.

So, too, have yo-yo dieters and those with eating disorders such as anorexia nervosa.

This is linked to the very low body fat sometimes sought by each of these people, which often causes periods to become irregular or to stop altogether. The resultant low oestrogen levels increase the risk of thinning bones.

Heavy drinkers are also more at risk of the disease, because they tend to be poorly nourished.

Talking about the importance of educating young people, Camilla said: ‘I think we all think we’re immortal, don’t we, when we’re young.’

‘But actually understanding what actually happens and how they can prevent it.’

Hunniford asked Camilla if she worries about the young people in her family and if she is able to get the message across.

‘I think my daughter’s generation does listen, it’s just getting through to grandchildren. But, you know, they’re starting to be teenagers.

‘I would show them pictures of my mother, before and after she got osteoporosis. I would make them look at these photographs and say “look, if you don’t take care that’s what will happen to you”,’ she said.

The Royal Osteoporosis Society published a study into life with the condition on World Osteoporosis Day last week.

Chief executive Craig Jones said: ‘The support of our president, HRH The Duchess of Cornwall, has been our greatest asset in raising awareness of the importance of preventing and treating osteoporosis, since she has seen its impact first-hand in her own family.

‘Osteoporosis is one of the most urgent societal challenges to living well in later life. Our new report gives us the richest set of insights for many years into its effect on the lives of the 3.5 million people who live with the condition.

‘Whatever our age, we can pay attention to our bone health, which can help prevent the distress, social isolation, broken connections and spiralling NHS costs caused by osteoporosis.

‘The disease is treatable and beatable. If we take it on together, we can transform the experience of later life for millions of people.’

The full interview with Camilla will be broadcast on Morning Live on BBC One and BBC iPlayer on Monday at 9.15am.