Duck stampede! 3,000 of the birds march across the road in Thailand creating a dust storm

Duck stampede! 3,000 of the birds march across the road in Thailand creating a dust storm

A flabbergasting clip shows the moment thousands of ducks are herded across a road in South Thailand at incredible speed, flapping up a cloud of dust.

Approximately 3,000 birds cross the road within 41 seconds, waddling at break neck speed before launching themselves down the bank towards a rice paddy.

A farmer herding the birds from their coup to the rice paddies everyday, caught the attention of the filmer, believed to be a tourist, who begun to film the humorous daily migration.

The filmer commented: ‘I have been filming these ducks in early morning around 7:00am when they dash out to the paddy fields, and then in the evening around 6:00pm when they return to their sleeping area.’

Ducks work as insecticide for farmers as they snack on insects feeding on the produce in the rice paddies.

They are also eaten for their meat – roasted duck is often seen in Thai food courts and street food stalls.

The clip was filmed early in the morning on Monday May 20 as the birds moved from their pen leaving a cloud of dust in their wake as they stampede across a road to get to the paddy fields.

Klong Sam, Klong Luang in Pathumthani is an area known for being agricultural with many rice paddies full of insects for birds such as ducks to feast on. 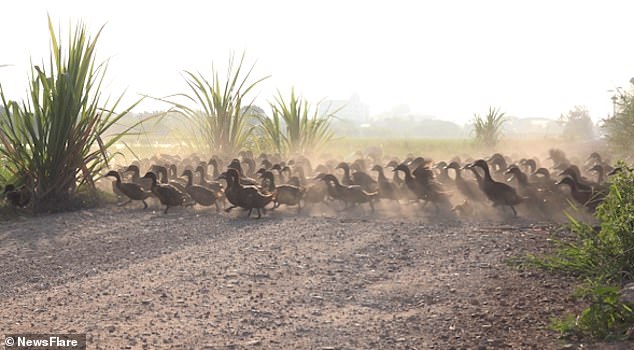