A duck believed to be extinct for 15 years has been given a new lease of life on a remote lake in Madagascar.

Some 21 Madagascar pochards, thought to be the rarest bird on Earth, spent a week in the safety of the world’s first floating aviaries on Lake Sofia in the country’s north.

This pioneering approach is designed to let the birds to become accustomed to their new surroundings, increasing the chances they will remain at the site after release.

The state of the wetlands in Madagascar is so poor they will likely not survive if they leave the lake, said Gloucestershire-based WWT, who are behind the project.

The ducks were released from the aviaries earlier this month and very quickly adapted to the lake, diving and flying, associating with other wild ducks and returning to the safety of the floating aviaries to feed and roost.

Experts from WWT, Durrell Wildlife Conservation Trust, The Peregrine Fund and the Government of Madagascar have spent years laying the foundations for the birds’ introduction.

With a wild population of just 25, this duck may be the rarest bird on the planet.

‘We have been preparing for this moment for over a decade.

‘The logistics of working in a remote part of Madagascar – where access to the lakes by vehicle is only possible for three months a year – have been an enormous challenge, requiring us to come up with novel approaches.

‘Working with local communities to solve the issues which were driving this bird to extinction has been essential to giving the pochard a chance of survival.

‘If we can make this work, it will provide a powerful example not just for of how save the planet’s most threatened species but how communities can manage an ecosystem to benefit people and wildlife, especially in areas of significant poverty.’ 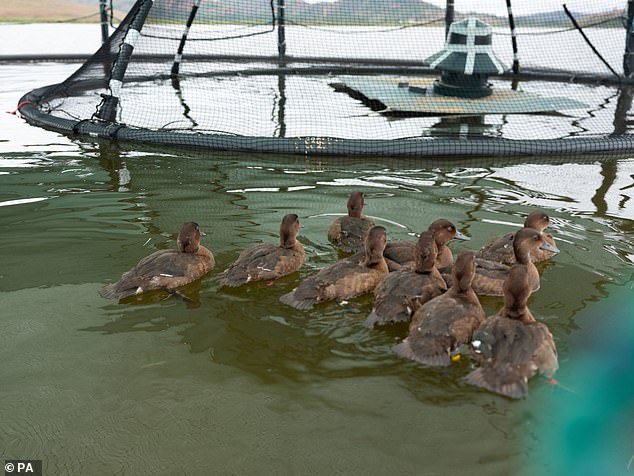 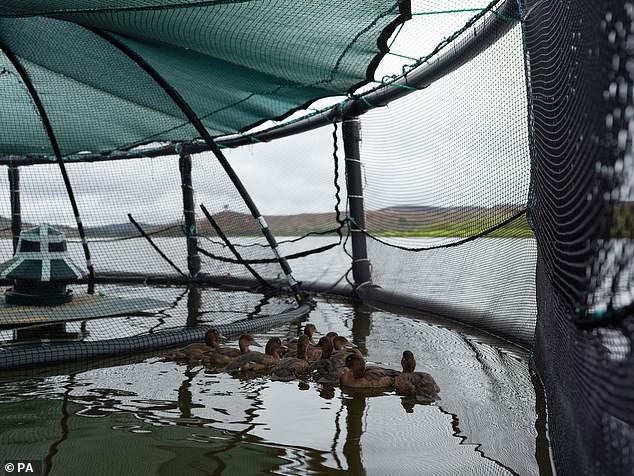 Conservationists have been meticulously planning their release since the surprise discovery of a small group of pochards in 2006. Madagascar pochard ducklings at the floating aviaries at Lake Sofia 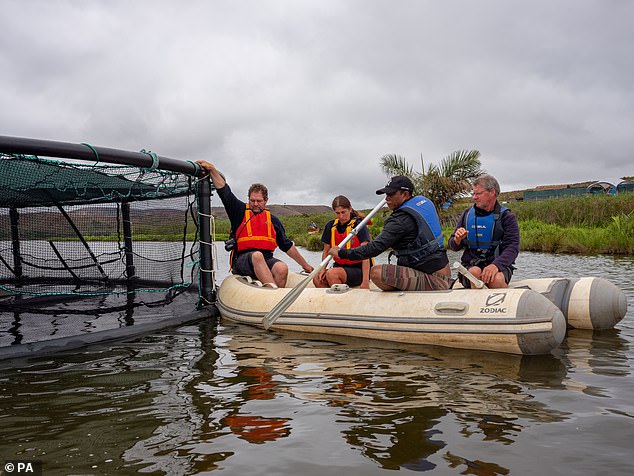 With a wild population of just 25, this duck may be the rarest bird on the planet. Members of the WWT conservation team releasing the Madagascar pochard ducklings

Conservationists have been meticulously planning their release since the surprise discovery of a small group of pochards in 2006.

Faced with an endless set of logistical hurdles, they have had to consistently think outside the box.

Madagascar pochards spend almost all their time on water and, importantly, feed underwater.

For this reason, a plan was conceived to convert Scottish salmon-farming cages into the world’s first floating aviaries.

After successful trials in 2017, the aviaries were shipped from the UK to Madagascar and assembled on Lake Sofia this summer.

WHAT IS THE MADAGASCAR POCHARD?

Madagascar pochards are diving birds that probably feed on aquatic plants and invertebrates in shallow water. Males have a distinctive white iris.

In late 2006, it was announced that the Madagascar pochard, last seen in 1991 and feared extinct, had been rediscovered by biologists.

Unlike previously known populations, which inhabited marshy, densely vegetated lakes, the small colony of pochards located by The Peregrine Fund team was found in a heavily forested volcanic lake.

Although this has raised hopes that the species is holding on in other areas as well, intensive surveys have so far not found any further populations.

In the past, the Madagascar pochard was found in the Lac Alaotra basin. This region is a major rice-growing centre and the lake, its reedbeds and the wildlife that lives there have suffered from burning and hunting.

The pochard, like many other waterbird species, was unable to compete with introduced fish at Alaotra and other suitable wetlands.

The tiny population recently discovered is living much further north, on a lake where there has been much less human disturbance – the area is not suitable for rice cultivation and there are no fish.

In 2009 it was estimated that there were only 20 Madagascar pochards left in the world.

The Durrell Wildlife Conservation Trust, Wildfowl and Wetlands Trust, The Peregrine Fund and the Madagascar Government began an emergency operation to save the species from extinction.

Three clutches of eggs were collected from the wild and 23 ducklings were reared.

These birds will now form the basis of a captive-rearing project in Madagascar with the aim of one day returning this duck to other parts of Madagascar.

Ducklings hatched in October were transported 124 miles to the lake along a dirt road and reared in lakeside aviaries.

Then, in early December, just before they were able to fly, they were moved into the floating aviaries.

Other floating equipment – feeding stations and loafing rafts – have also been specially designed and installed on the lake to give the birds the best possible chance of survival.

With much of the wetlands across northern Madagascar severely degraded due to human encroachment, conservationists have also been working to improve the condition of Lake Sofia.

Dr Glyn Young, head of birds at the Durrell Wildlife Conservation Trust, said: ‘The idea that we could be releasing pochards into the wild only 12 years after rediscovery pays remarkable testament to the dreams and hard work of many people from Madagascar, Jersey and the UK, who have worked tirelessly to see this remarkable bird get a chance of survival in a changing world.’ 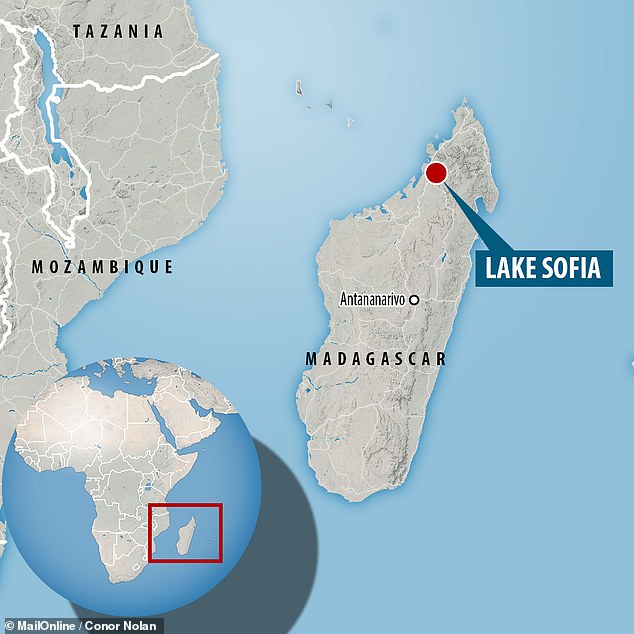 After successful trials in 2017, the aviaries were shipped from the UK to Madagascar and assembled on Lake Sofia this summer 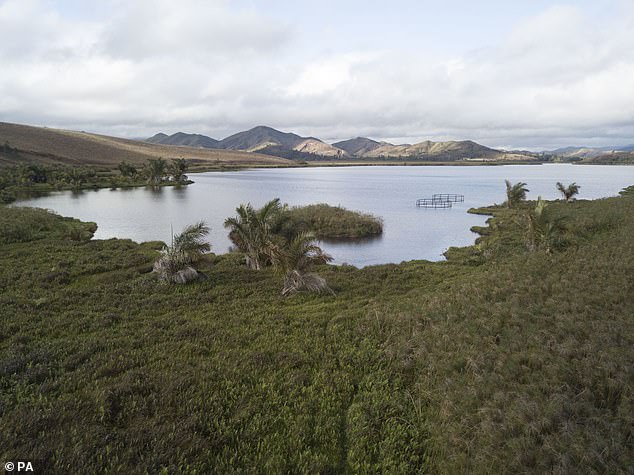 This pioneering approach is designed to let the birds to become accustomed to their new surroundings, increasing the chances they will remain at the site (pictured) after release 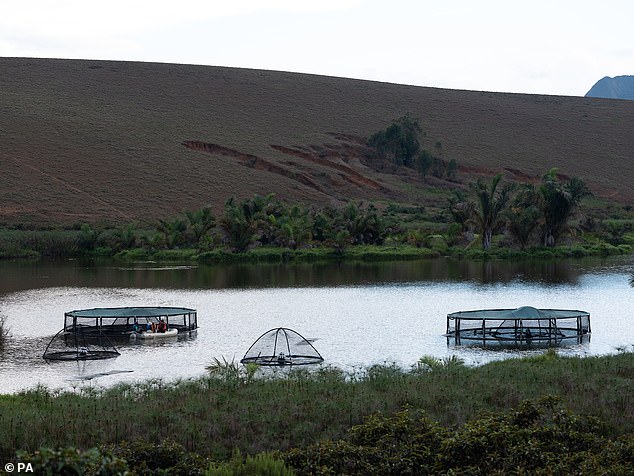 The ducks were released from the aviaries (pictured) earlier this month and very quickly adapted to the lake, diving and flying, associating with other wild ducks and returning to the safety of the floating aviaries to feed and roost.